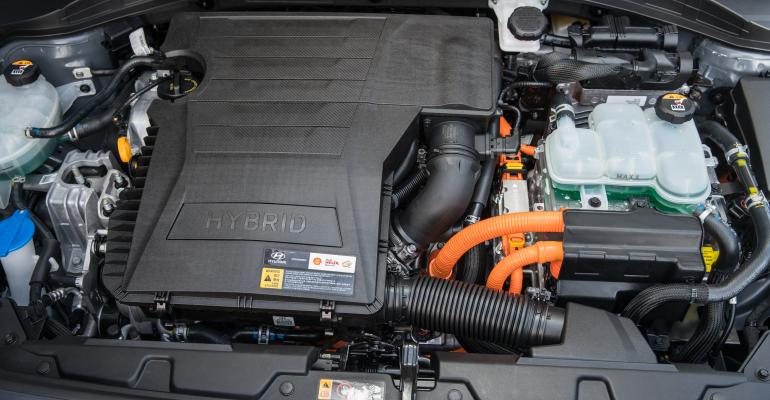 Hyundai engineers make efficiency gains on direct-injection, cooled-exhaust-gas-recirculation systems that give the Blue grade of the Ioniq hybrid class-leading fuel economy in the U.S.

With the launch of the new Hyundai Ioniq and Kia Niro family of green cars, Hyundai is introducing an all-new engine for the hybrid versions of those two models.

In the same Kappa engine family as the 128-hp 1.4L direct-injected turbocharged gasoline 4-cyl. in Hyundai’s Elantra Eco, winner of a 2017 Wards 10 Best Engines award, the new naturally aspirated 1.6L Kappa boasts a new DI system, as well as Atkinson-cycle combustion and a variety of other measures to help the Ioniq hybrid achieve best-in-segment fuel economy of 58 mpg (4.1 L/100 km) combined in the Blue grade.

“Toyota (with the Prius’ 1.8L DOHC 4-cyl.) achieves 40% brake thermal efficiency. This matches that. I think this is the second (gasoline) engine in the industry that achieves that.”

Toyota has announced a new 2.5L DI inline-4 with a projected 41% thermal efficiency, expected in the new Camry Hybrid.

Despite having smaller displacement than the Prius engine, Sonnichsen says Hyundai’s 1.6L is able to produce more power, giving the Ioniq hybrid the same fun-to-drive character Toyota has been touting for the Prius.

“This is targeted toward fun-to-drive, sport – it’s not your average grocery getter,” he says.

Total system horsepower for the Ioniq hybrid tops the Prius, at 139 vs. 121. Hyundai pairs the 1.6L to a 32-kW (43-hp) electric motor – which it touts as 95% efficient thanks to rectangular-section copper wire and a forced-water cooling system – as well as a 1.56-kWh lithium-ion battery pack. The pack is touted as the first in the world to combine 240V and 12V Li-ions.

To maximize the Kappa 1.6L’s efficiency, Hyundai uses a water-jacket insert allowing heat rejection to be focused on the upper side of the bore, allowing for heat to be pulled away from the hard portion of the bore instead of having water down low where heat extraction isn’t needed as much. “(The insert is) more for stability of the block,” Sonnichsen says. “(And) the more heat you can pull out of a combustion system, the better you are from a NOx mitigation standpoint.”

Adds John Juriga, director-HATCI: “Out of all the engines in the Hyundai family, this is the most technically advanced.”

Also being used to pull heat out of the combustion chamber are sodium-filled hollow-exhaust valves. Typically seen in high-performance engines, they extend the enrichment level to mitigate heat, he says.

The direct-injection system Hyundai employs on the 1.6L Kappa is newly developed with fuel pressure up to 200-bar psi and six individual laser-drilled holes in a triangular pattern. Holes are different sizes. Making them 10% or 20% smaller or larger than standard holes allows Hyundai to achieve better atomization of fuel and to inject fuel deeper into the bore, Sonnichsen says.

“That’s targeted to support the 200-bar in terms of spraying deeper into the bore, but it also targets the fuel off the walls and off the piston and minimizes the wall-wetting that occurs,” he says. Less wall-wetting results in better mixing of the charge, better conversion, fewer emissions and reduces smoke or particulate matter. It also means less dilution into the oil, meaning longer-lasting oil, he says, noting this high-pressure DI system likely will migrate to all Hyundai engine families.

“Particulate emissions standards are getting decreased,” Juriga says. “With DI, it’s much more of a challenge to get low particulate numbers, so we need to refine the new technology to help so when those new standards come out we won’t be in trouble.”

Juriga pinpoints a 0.8% increase in fuel economy as a result of the 200-bar laser-drilled injectors vs. old-style injectors with 150-bar psi. The injector pattern and hole sizes also help minimize coking, or carbon buildup on their ends.

The 1.6L Kappa has a long stroke-to-bore ratio of 97 mm by 72 mm. Sonnichsen says stroking was necessary to increase displacement to offset torque loss that results from using the Atkinson cycle. The bore remains the same as with the 1.4L multiport-injected 4-cyl. Hyundai uses in European models and which is the basis for the 1.6L Kappa.

“The real benefit of doing that is thermal efficiency,” he says. “You have less heat rejection into it, so your surface-to-volume ratio is decreased by 13% by doing this. (There’s) more volume to do work instead of it being lost.”

Also boosting the 1.6L’s efficiency is a cooled exhaust-gas-recirculation system. The engine utilizes up to 20% EGR, a high figure relatively speaking.

“That’s pushing the envelope,” Juriga says. “I don’t know anybody who’s beyond 20% right now. Getting much beyond that you really get into stability issues.”

A fast burn rate on the combustion side allows Hyundai to be less EGR-sensitive, Sonnichsen says, but also notes Hyundai takes EGR before the catalyst, not after, something he believes is unique in the industry. “We also maximized up to 98% cool-air efficiency,” he says, adding overall Hyundai realized about a 3% fuel-efficiency gain with this technology.

Friction-reduction efforts include diamond-like coatings on sliding components, a 2-stage oil pump with pressure at higher speeds and 0W20 lower-viscosity engine oil. Juriga notes the injectors are not matched to fully synthetic oil.

Atkinson cycle reduces the pumping loss of a late intake valve closing and increases the expansion ratio for better fuel economy, while OCV integrated dual CVVT extends the phasing angle with a faster response. The head-block split cooling allows for independently targeted coolant temperatures for the cylinder head and block.