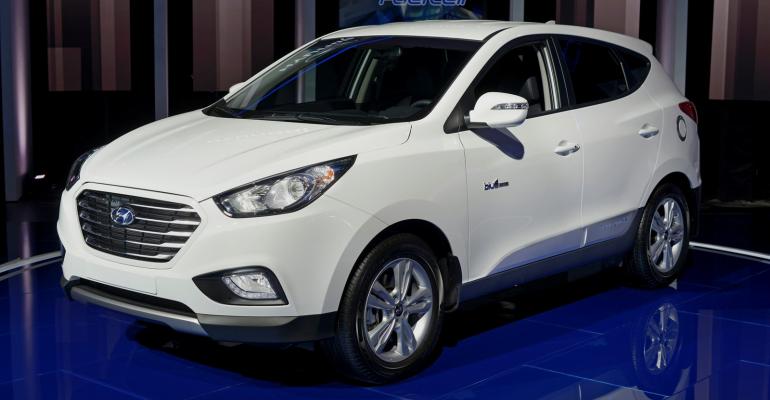 Hyundai: Fuel Cell Partnerships Not Right for Us Now

Hyundai&rsquo;s next-gen Tucson fuel-cell vehicle is a scant 16 months away. Meanwhile, the 26 eco cars Hyundai and Kia have planned by 2020 may not be enough.

SOUTHFIELD, MI – While many automakers have paired up on the costly development of hydrogen-fuel-cell systems, Hyundai-Kia Automotive Group continues to go it alone.

That’s not for lack of interest from other OEMs, says a top executive.

“We’ve actually got several proposals from other OEMs,” Byung Ki Ahn, director-Eco-Vehicle Performance Development Group for Hyundai R&D, tells WardsAuto here in an interview. “We reviewed them carefully, but eventually came to the conclusion that it’s not going to be of much help.”

That’s partially due to the fact Hyundai already is far along in development of its next-generation fuel-cell system, with a new version of the Tucson fuel-cell vehicle due in 2018.

Ahn says the second-gen mass-market Tucson FCV will have a smaller stack, the heart of the fuel cell where hydrogen and oxygen react to produce electricity, as well as a smaller hydrogen-fuel tank.

Ahn also promises new, unnamed technologies will be introduced in the forthcoming Tucson FCV, the Korean launch of which will coincide with the Winter Olympics in February 2018 in PyeongChang, South Korea.

While Ahn says Hyundai is open to possible technology partnerships, they would have to occur further into the future.

“If we do co-work with someone else, maybe it will be for not the next, but the…next-next generations beyond 2020,” he says.

Ahn says there are pros and cons to such partnerships, and that it remains to be seen if all the existing ones will be beneficial.

“(General Motors) and Honda are exchanging patents, which should be good,” he says. “Toyota and BMW – one company has technology and the other money. They can probably make good partners. But is it really going well with the consortium of Nissan, Ford and Daimler?”

The latter group came together three years ago, but has put out scant updates on its work on a collaborative fuel-cell system that was to debut in a vehicle as early as next year.

Nissan said last fall its FCV may not come to market until 2020 or 2021, as infrastructure remains a question mark.

A fuel-cell version of Daimler’s Mercedes GLC has been rumored to debut next year, but it’s unclear if the technology it carries is a result of the partnership with Nissan and Ford.

Hyundai, too, is concerned about the refueling infrastructure, both in the U.S. and South Korea, with a spokesman noting the pace in opening stations in California has been slower than expected, frustrating automakers and the state alike.

The California Fuel Cell Partnership website shows 17 retail stations open, up from less than a dozen in February. There are 23 retail stations in development, per the website, largely in the San Francisco and Los Angeles areas where FCV demand is forecast to be the greatest.

Like Toyota, which retails the Mirai FCV, Hyundai is monitoring existing pumps to make sure they have limited downtime and that the hydrogen flowing from the pumps is pure.

“Everybody’s learning how to put these (stations) up…and we’ve seen some downtime on some of these (early existing stations),” the spokesman says. “The number of pumps is few at any one station therefore downtime is much more of an issue. So we’ve been very concerned about up time.”

In South Korea, Ahn notes there had been tension between Hyundai and the federal government with the latter concerned the former was focusing too much on fuel cells to the detriment of pure electric vehicles.

“They had some worries, but finally it’s going really smooth,” Ahn says, after Hyundai explained it intends to retail EVs too, but needs to sell FCVs for long-distance drivers.

The Hyundai brand will retail its first pure EV in the U.S. in the form of the Ioniq later this year.

There also will be hybrid and plug-in hybrid Ioniqs, with the hybrid launching alongside the EV and the PHEV due around the second quarter of 2017.

The Ioniq EV is one of six EVs Hyundai/Kia have coming by 2020, part of a crop of 26 eco cars from the two brands that include 10 hybrids, eight PHEVs and two FCVs.

“And probably that’s not going to be enough,” Ahn says when asked about Hyundai’s readiness for U.S. 2025 fuel-economy rules, when most automakers will need to meet a fleet, unadjusted CAFE figure of 54.5 mpg (4.7 L/100 km).

Also, automakers that retail larger, fuel-chugging vehicles may have an easier time of achieving CAFE, as the CAFE goal per automaker is footprint-based and cars have bigger fuel economy increases to achieve than pickup trucks.

Hyundai retails no pickups in the U.S., selling five cars and two CUV nameplates under its namesake brand here. The Kia and Genesis brands also have no pickup trucks in their lineups.

Of 48V, Ahn says Hyundai at the moment is “not quite certain that is going to be cost-effective,” a common concern in the industry as a significant amount of re-engineering needs to happen to accommodate more advanced electrical systems.

However, Hyundai is introducing or plans to introduce more advanced transmissions to improve fuel economy, with the Ioniq having a 6-speed DCT and forthcoming Genesis luxury models using 9- and 10-speed automatics.

Kia, whose vehicles are engineered jointly with Hyundai, introduced stop-start in the U.S. on the ’12 Soul and Rio models. It's still available on the Soul, but Kia received backlash at first, finding industry types and customers didn’t like the shudder from the engine restarting. However, the technology is increasingly available in U.S. models, as many automakers including luxury manufacturers find it an effective way to reduce emissions at idle and systems are being refined to operate more smoothly.