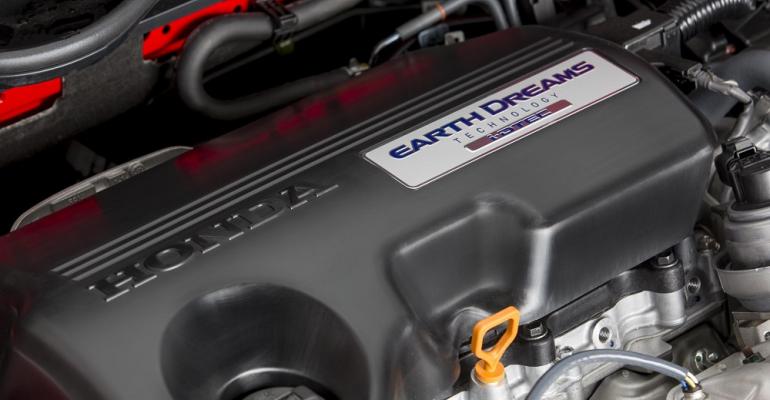 Honda Stands Behind Diesel With New 1.6L for Civic

The engine, coming to market in March, is one of the first units to be officially tested under the new Worldwide Harmonized Light Vehicle Test Procedure fuel consumption and emissions cycle.

The engine, coming to market in March, is one of the first units to be officially tested under the new Worldwide Harmonized Light Vehicle Test Procedure fuel consumption and emissions cycle, which comes into force this year.

While data from the familiar New European Driving Cycle test is based on a theoretical driving profile, the WLTP cycle was developed around real-world driving data gathered from around the globe.

Honda credits improvements to the engine and exhaust system for its 63.5 mpg (3.7 L/100 km) fuel economy and 99 g/km carbon-dioxide rating under the P cycle.

Engine improvements include a reduction in cylinder friction, thanks to pistons made from highly durable chromium-molybdenum steel alloy, as well as super plateau honing of the bores to enable smoother piston movement. Additional cast ribs have been added to the cylinder block to increase structural rigidity, reducing vibration and harshness.

The engine also is one of the first Honda products to be officially tested through the Real Driving Emission procedure to validate nitrogen-oxide and particulate emission levels.

The diesel powertrain has a new NOx Storage Converter system with larger catalysts and a higher content of noble metals (silver, platinum and neodymium) that store nitrogen-oxide gas until the regeneration cycle. A soot sensor detects when the regeneration cycle is required, extending exhaust component life.

Assembled at Honda of the U.K. Mfg. plant in Swindon, the revised engine will be available in both the 4- and 5-door variants of the new 10th-generation Civic.

A 9-speed automatic transmission will bolster the Civic’s powertrain options in mid-2018, representing its first-ever application in a 2-wheel-drive car.