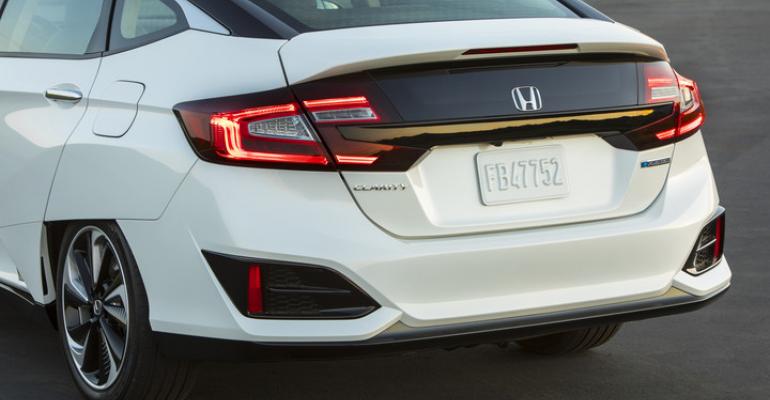 Thomas Brachmann, chief project engineer-R&amp;D Europe for Honda, says storing surplus liquefied hydrogen in an inert state in gas tanks could be a much more efficient power source than batteries that degrade.

GENEVA – Hydrogen power for automobiles has a big advantage over battery power, and it’s not just the easier access and higher range a tank of the gas can provide, a Honda researcher says.

Thomas Brachmann, chief project engineer-R&D Europe for Honda, points to the liquefied gas’s potential as a storage medium for the increasing supplies from renewable energy sources.

He tells WardsAuto at this year’s Geneva auto show that storing surplus energy in an inert state in gas tanks could be a much more efficient solution than using degradable batteries.

“Photovoltaic electrolysis as a means of producing hydrogen is feasible,” he says, “because it’s the only means we have of converting renewable energy electricity into a usable fuel and, even more important, into a proper storage media for renewable energy.”

Brachmann believes hydrogen holds the key to handling the sometimes-erratic production of renewable energy from solar and wind farms.

“For example, wind and sun can produce too much power during some days so either the wind-power generators are stopped, or they run and we have to sell the electricity to the grid for a very low price and, possibly, even have to pay the grid to take it because it may not be ready to accept more than it can handle.

“This means we have to find renewable energy storage,” Brachmann says. “If we have bi-directional charging that’s fine with batteries, or else the other solution is hydrogen. Then we have to look at what is the value of the hydrogen and for which industrial purposes?”

The engineer argues that when it comes to infrastructure, both hydrogen and battery-electric vehicles will require roughly the same sort of investment as each other. However, hydrogen offers some advantages over battery-powered EVs.

“Even if you have all-battery EVs, we have to consider very carefully the lifetime of the batteries. When does the degradation start by excessive charging and recharging, and what is the benefit for the customer?

“For Honda, both paths are feasible and, with hydrogen, we have developed a very clever electrolyzer which does not need a compressor any more. We do this via hydrodifferential pressure that electrolyzes with our fuel-cell stack.”

Brachmann suggests both battery EVs and FCVs have a role to play in future transport solutions. “As we said in our study of 2010, we see the smaller cars using battery power and the bigger cars using fuel-cell systems. So we need to look at where does the battery end and the hydrogen car start.

“We see the Honda Civic growing bigger and bigger, more or less for the European taste (and) replacing the Accord, and so we need to see if we can integrate this platform with this model level.

“The Clarity (FCV) is larger and developed for the U.S. and targeted as a chauffeured limousine as it would be also in Japan. It could fit into Honda’s European portfolio, too, and we have to see what is the development of (fueling) infrastructure.

“This is why we need to ramp up the availability of hydrogen fuel stations first.”