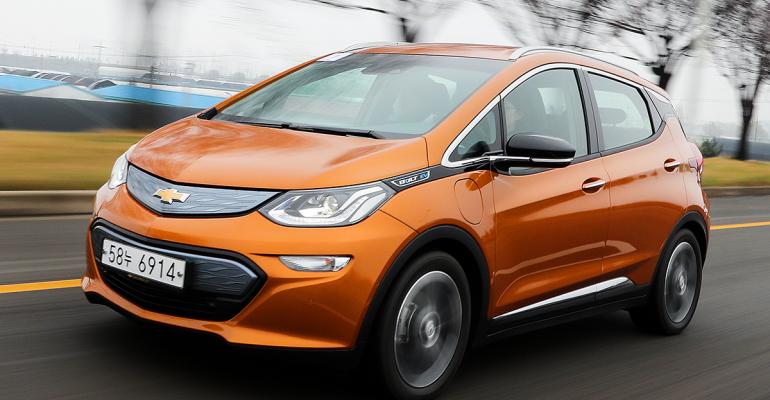 GM Korea begins taking preorders for the Bolt electric vehicle and announces General Motors has allocated 5,000 units to its Korean subsidiary for sale this year in the domestic market.

GM Korea says in a statement its 2018 goal is to be the leading provider of EVs in Korea, which means it plans to outsell all other automakers including both Hyundai and Kia, which have formidable new EVs coming into the segment.

The Bolt EV’s range is a major feature, as well as styling, spaciousness and handling as reported by independent test drivers. The upgraded model is able to achieve an average 237 miles (383 km) of city and highway driving on a full charge, and 255 miles (411 km) in city-only driving, according to GM Korea. However, competition will be stiff.

Hyundai is preparing to launch an EV version of its new Kona subcompact CUV sometime in the first quarter and has started taking preorders for the new model.

Kia, meanwhile, is expected to launch its Niro EV and a new Soul EV in the Korean market in the first quarter.

While none of the EVs are moneymakers for their companies, analysts predict 2018 may be a watershed year for them in Korea.

The 13,724 all-electric vehicles sold in Korea last year accounted for 14% of the total 97,486 eco-friendly vehicles (EVs, plug-in hybrids, hybrids) sold by all manufacturers.

Analysts expect sales of all eco-friendly vehicles in Korea to exceed 100,000 units in 2018.