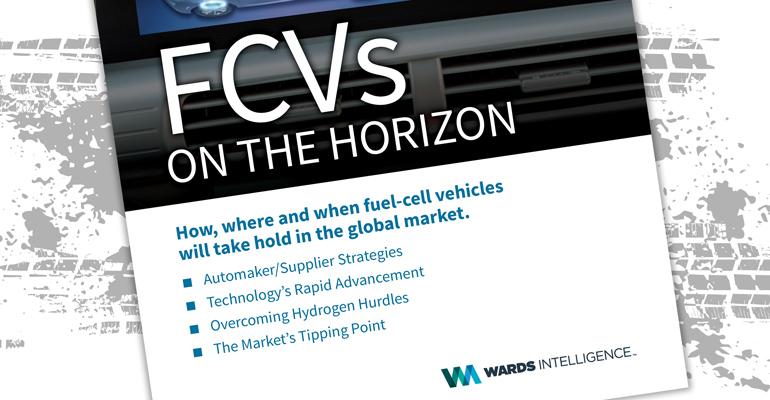 A new research report by Wards Intelligence, “FCVs On The Horizon,” reveals a number of factors driving that growth. Among them: reductions in the cost and size of fuel-cell stacks; improvements in fuel-cell output and durability; and an expanding fueling infrastructure.

Fuel-cell vehicles represent a tiny niche in the global automotive market, but their mere existence today as functional, everyday cars marketed by major automakers suggests the technology is on a path to wider proliferation in the coming decade.

While the numbers will remain small compared with vehicles fitted with internal-combustion, battery-electric or hybrid propulsion, automakers and suppliers are planning for substantial growth in the segment as the world’s transportation systems slowly transform to a hydrogen-driven future.

A new research report by Wards Intelligence, “FCVs On The Horizon,” reveals a number of factors driving that growth: reductions in the cost and size of fuel-cell stacks; improvements in fuel-cell output and durability; public and private efforts to expand the fueling infrastructure and clean sources of hydrogen; improvements in electric motors, energy storage and control systems; and the application of fuel cells to economically power everything from forklifts to Class 8 long-haul trucks.

A Wards Intelligence survey of OEMs and suppliers and projections from data partner LMC Automotive suggest fuel-cell demand in light vehicles will pick up momentum by 2025, initially finding the greatest opportunities in fullsize SUVs and trucks. Commercial vehicles, buses, heavy-duty trucks and forklifts will provide significant growth opportunities as well.

The main impediment is fueling infrastructure. There aren’t enough stations and hydrogen is expensive to produce. And depending on the source of hydrogen – if it is produced from coal-fired electric power, for instance – then it is not clean. Technologically, while on-road operation has been validated and the stack has been downsized sufficiently to be placed in a compact car’s engine compartment, system cost is still prohibitive although a pathway can be seen to fill certain niches based on duty cycle and application.

Among the report’s key findings:

“FCVs On The Horizon” draws on Wards Intelligence and LMC Automotive data as well as more than a dozen executive interviews with OEMs and key fuel-cell-system suppliers in the U.S. and Canada, Germany, Japan, South Korea and China, along with input from the Hydrogen Council, NOW, the U.S. Department of Energy, California Energy Commission and Japan’s Ministry of Economy, Trade and Industry.