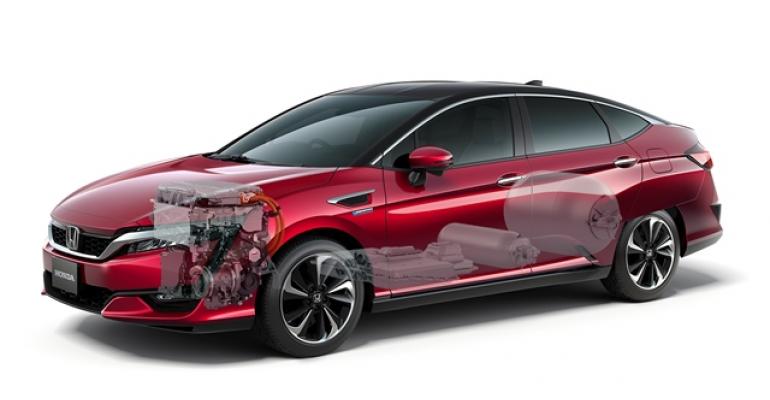 Honda&rsquo;s development of fuel cells, begun in the late 1980s, pays off in the third-generation Clarity, which offers a compact fuel-cell powertrain capable of being packaged under the hood of a Pilot CUV.

“If it can hold a V-6, it can hold a fuel cell,” Steve Center, vice president-environmental business development for American Honda, tells WardsAuto at a media drive program here for the ’17 Clarity.

Center’s comment comes as the Japanese automaker rolls out its third-generation fuel-cell vehicle, which it began leasing in California last December. The well-appointed, 5-seat sedan boasts an EPA-certified range of 366 miles (589 km) based on a 68-mpg (3.5 L/100 km) combined fuel-economy rating.

The redesigned Clarity fuel-cell stack offers a significant increase in output despite a 30% cut in the number of individual cells and a 33% reduction in the overall fuel-cell package. Along with a 20% thinner and redesigned cooling structure, the downsizing allows engineers to switch from a vertical to horizontal layout for the stack.

Center says while the newest Honda fuel-cell powertrain makes it possible to install it in the engine bay of a Pilot CUV or Ridgeline pickup – or even the 4-cyl. space in a CR-V – he’s not announcing fuel-cell-powered versions of those models at this time.

Center also makes clear the Clarity badge is strictly for the current model and its environmentally friendly battery-electric and plug-in hybrid siblings that will debut in April at the New York auto show. Potential fuel-cell versions of the Pilot or other models would retain their branding with powertrain options called out.

Honda has modest volume goals for its latest FCV, topping 100 deliveries by the end of March and projecting some 50-60 leases per month going forward. So far, the vehicle is available only in California due to limitations on hydrogen-refueling infrastructure. There are 27 retail hydrogen-refueling stations in the state, according to the California Fuel Cell Partnership.

“You can’t flood the market – the fueling infrastructure can’t handle it,” Center says.