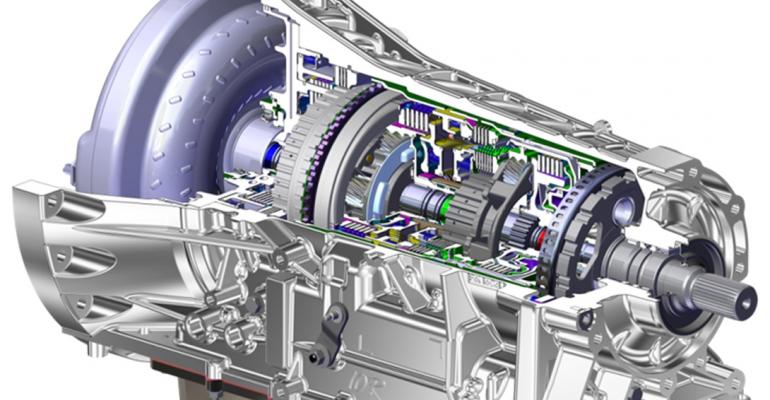 The compression ratio now is 10.5:1, up from 10.0:1, although the lower ratio continues for the high-output version of the engine in the F-150 Raptor.

The Raptor engine’s fuel demands in part drove the need to add port fuel injection on top of existing direct injection in the second-generation engine, Mazuchowski says. But the extra fuel-delivery system also allows engineers to shut down the direct-injection system and its mechanical pump at low speeds and under low loads, reducing friction losses and emissions. Employing both systems at start-up cuts cold-start emissions as well.

Ford is awaiting EPA certification before disclosing any estimates of potential fuel-economy gains from the second-gen engine.

The second part of the powertrain picture is the all-new 10-speed automatic transmission, designed, engineered and produced by Ford in a joint program with General Motors. GM is designing and engineering a 9-speed gearbox as part of the technology-sharing venture and will manufacture and calibrate its own 10-speed based on the Ford design.

Also included is real-time adaptive shift scheduling to help maintain the right ratio based on load, driver demand and conditions.

Despite the increase in ratios (up from six), the transmission is slightly longer and just a few pounds heavier, Norris says, thanks in part to the use of lightweight materials. It is the first Ford transmission to eschew cast-iron components, he says.

Ford will package the 10-speed exclusively with the 3.5L EcoBoost engine for the ’17 F-150. Carryover powertrains include the 5.0L V-8, the naturally aspirated 3.5L V-6 and the 2.7L EcoBoost V-6, all paired with 6-speed transmissions.

“The 3.5L EcoBoost is best when you have a mix of light use and some towing,” Scott recommends. “We’ll be giving the same advice for the ’17 model.”

But Scott notes EcoBoost engines have overcome initial skepticism that truck buyers wouldn’t embrace V-6s. In April, 62% of F-150s were sold with turbo V-6s and the number rises to 72% when non-turbo V-6 engines are added to the mix. And by June, Ford will sell its 1 millionth EcoBoost V-6-powered F-150 since the engine’s 2011 debut.

“There is no better example of innovation brought to life than the F-150,” Scott says.