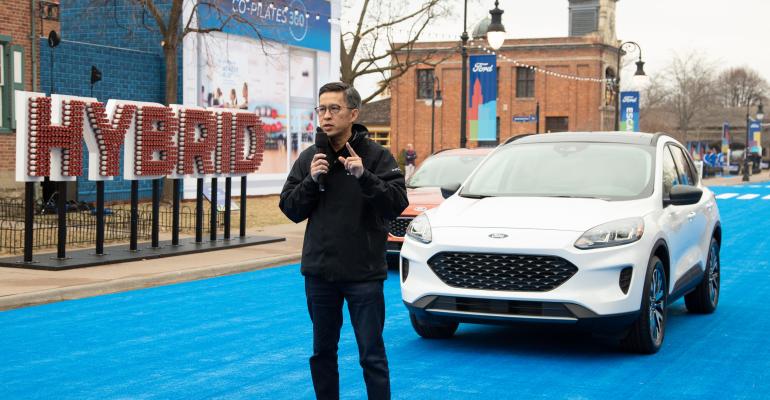 For the ’20 model year, the Escape adds new engines and propulsion systems, including a hybrid variant and a plug-in hybrid with a 30-mile electric range.

DEARBORN, MI – Ford reveals details of the ’20 Escape midsize CUV, while announcing it has another crossover planned for its new front-wheel-drive/all-wheel-drive unitized platform.

“We want to have really differentiated styling (with the new model so the Escape’s) silhouette is very sleek, dynamic – more progressive. The off-road utility will be more upright, boxy,” Thai-Tang tells media at a ’20 Escape event here at Greenfield Village March 28.

The second CUV, which Ford hasn’t named, launches next year and will have a taller ride height, different approach and departure angles and different track widths.

Given the seemingly insatiable appetite for midsize CUVs – it is now the U.S.’s largest vehicle segment, with 3.7 million units sold in 2018 per Wards Intelligence data – Ford is not the only automaker pursuing a two-vehicle strategy.

Wards earlier reported Toyota is expected to offer an urban-oriented midsize CUV off the next-generation Mazda CX-7 platform to be sold in showrooms alongside the midsize RAV4 CUV. Toyota’s RAV4, whose fifth generation just launched, has a more rugged, traditional SUV-like appearance.

With the new Escape, on sale this fall in the U.S., Ford reintroduces a hybrid variant and for the first time will offer a plug-in hybrid version. The PHEV, to be sold in all 50 states, will arrive six months after the hybrid and non-hybrids, a Ford spokesman says.

Ford skipped a hybrid for the current Escape, but the first-generation model was a 2009 Wards 10 Best Engines winner, in part for its ability to travel on electric power only at speeds above 40 mph (64 km/h).

With the new Escape Hybrid and its advanced transmission, Ford says drivers can travel on electricity up to 85 mph (137 km/h).

Daniel Kok, manager-hybrid powertrain systems, credits a new power-split CVT for the significant increase in electric-only speed for the hybrid.

The CVT allows the vehicle to launch with the electric motor and, due to transmission-oil cooling, the hybrid and PHEV both can tow up to 1,500 lbs. (680 kg).

The hybrid has a 1.1 kWh battery pack and the PHEV a 14.4 kWh pack, both liquid-cooled. Due to advances in lithium-ion technology, both packs are smaller and flatter than the pack in the previous Escape Hybrid, allowing them to fit under the cargo floor without intruding on cargo capacity.

Both packs are connected to a new engine, a 2.5L Atkinson-cycle 4-cyl. making its global debut in the Escape. The last Escape Hybrid also used a 2.5L Atkinson 4-cyl.

The Escape Hybrid is rated at 198 hp combined, while the PHEV will churn out 209 hp, a result of its bigger, more power-dense battery pack.

All grades of the ’20 Escape save for the PHEV are available in an AWD configuration.

Ford has not released fuel-economy figures for any of the Escape’s variants, including the hybrid.

It touts the 30-mile (48-km) electric range on the PHEV as class-leading.

Today Kia, Mitsubishi and Subaru offer non-luxury PHEVs in the U.S., with electric range from 22 miles (35 km) in the Subaru Crosstrek and Mitsubishi Outlander PHEVs to 26 miles (42 km) in the Kia Niro.

Ford touts four driver-selectable modes with the hybrid: EV now, EV later, EV charge and auto EV. Engineers say the vehicle can be forced into electric-only mode (EV now), even at highway speeds in cold weather, as long as the heater isn’t cranked.

“We do have a (positive temperature coefficient) heater to help, but if you’re demanding a lot of defrost and a lot of heat, we have to start the engine,” says Dona.

As for EV charge mode, driving style determines how much the battery will be charged.

“At low speeds we want to make sure that we’re not putting the powertrain into either a nasty NVH region or an inefficient region,” says Dona. “On higher speeds it depends on where you’re at as to how much we can charge and still be efficient, so we’re trying to maintain the efficiency of the powertrain while we’re charging.”

Both the 1.5L and 2.0L are mated to a new 8-speed automatic transmission, Ford says.

Rollinger says Ford-proprietary software-control algorithms, for which it has 20-plus granted or pending patents, is the secret to the cylinder deactivation.

“One hundred times a second we are constantly calculating the torque available, the NVH – and most importantly the fuel efficiency of the engine in both 3- and 2-cyl. operation, and picking for the customer, transparent to them, what we need to do between the two states to give them what they want.”

Rollinger tells Wards the system will go into 2-cyl. mode most often during deceleration or when a driver is lightly on the accelerator. Cruising speed, headwinds and road grade can affect its operation.

“Generally speaking, we’re going to switch on the third cylinder when you’re trying to get some acceleration and obviously add boost.”

He says Ford’s lightning-quick software calculations make it possible to go into lower-cylinder operation more than in prior systems by other automakers.

“One of the big things that keeps people out, in other systems, is the payback period or the so-called transition penalty,” he says. “It takes a certain amount of fuel to get you in and out, so you don’t want to short-cycle it. Some of our innovations allow us to close that transition penalty to a few seconds as opposed to tens of seconds.”

Other features Ford is touting for the ’20 Escape are sporty ride-and-handling (the Volkswagen Tiguan was benchmarked); available head-up display and a 12.3-in. (31-cm) digital instrument cluster; less noise intrusion into the cabin due to acoustic side glass in top grades; extensive underbody panels in nearly all grades for improved aerodynamics; a sliding second-row seat that is claimed to provide more knee room and leg clearance than the second row in a Chevrolet Suburban; and standard Ford Co-Pilot360 advanced driver-assist technology. 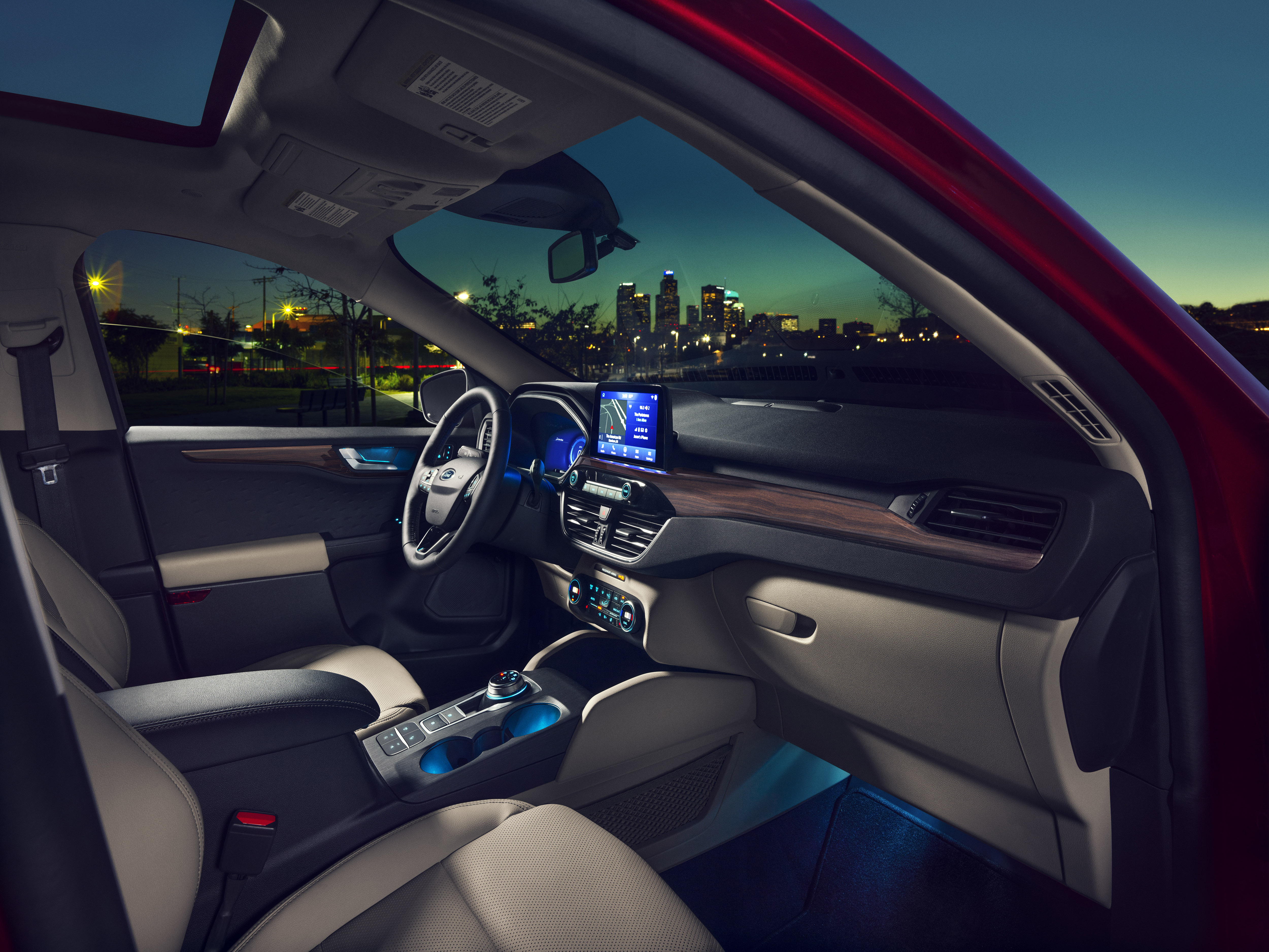 Available ADAS technologies include Active Park Assist 2.0 to automatically parallel- or reverse-perpendicular park the Escape, as well as Evasive Steer Assist, which debuted in the U.S. on ’19 Ford Edge. ESA provides steering support when a driver initiates an avoidance maneuver so as not to hit a slower-moving or stationary vehicle ahead.