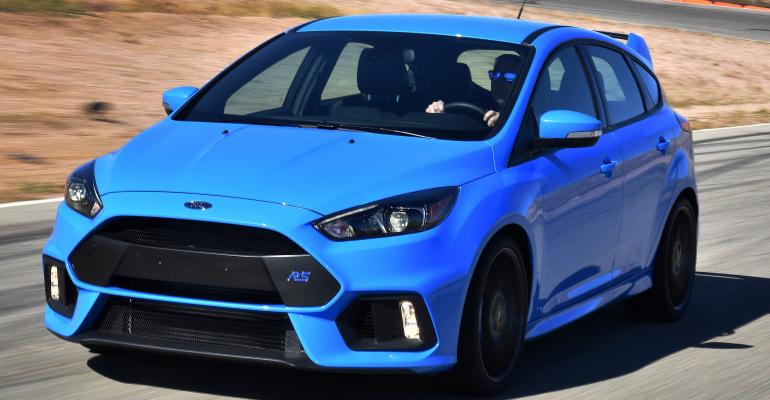 ROSAMOND, CA – As Ford Performance closes in on next spring’s introduction of the ’16 Focus RS, final details indicate the all-wheel-drive compact should be highly competitive in the hot-hatchback segment.

The Focus RS, priced at $36,605 (including $875 handling) competes with high-output compacts such as the Audi S3, Mercedes-Benz CLA45 AMG, Mitsubishi Evolution, Subaru WRX STI and the Volkswagen Golf R.

The car gets essentially the same specifications and setup in all 32 markets where it will be sold, including a zero-lift aero package, unique linear electronic power-assisted steering (compared with variable EPAS in the Focus ST), 13.8-in. (350-mm) front brake discs and 19-in. 235/35 Michelin Pilot Super Sport tires (Pilot Sport Cup track tires are optional).

“We are not dumbing the car down for North America,” Hameedi says. “We get the same tuning as Europe.”

But the biggest factor improving performance of the Focus RS is its move from front-drive to all-wheel drive, along with active torque vectoring. Jim Fritz, AWD systems engineer, says the setup gives the car AWD traction with rear-drive-like handling.

The system can send 100% of the torque to the rear axle, and the Rear-Drive Unit can divert up to 100% of that torque from left to right, Fritz says. Unlike a normal differential, the RDU uses electronically controlled clutch packs, rather than braking, to shift power across the rear axle.

A Rear-Drive Module takes readings from sensors 100 times per second and accordingly adjusts the RDU. Multiple modes – Normal, Sport, Track and Drift – allow the driver to alter the function of the AWD, dampers, steering, engine response, stability control and exhaust valving. The RS also gets Launch Control for the first time. A 6-speed manual gearbox is standard.

The torque-vectoring driveline is designed and supplied by GKN Automotive of Auburn Hills, MI, in collaboration with Ford and its vehicle dynamics engineers. GKN says its Twinster technology can apply torque to one or both wheels independently, enabling dynamic torque vectoring at any speed.

In the Focus RS, gear ratios deliver more torque to the rear wheels than previous applications of Twinster, so when AWD is engaged the unit drives the rear wheels faster than the front. GKN says overspeeding of the rear fundamentally changes the way the car feels and handles, making the rear end turn in more sharply and respond more immediately.

In Drift mode, the AWD system delivers enough torque to the rear wheels for the RS to achieve a controlled "drift" through corners.

In a ride-along in the Focus RS at Willow Springs Raceway, Ford test driver Gene Martindale demonstrated the system’s ability to smoothly pull the car through corners, with the rear-drive unit drawing power to the rear wheels as the clutches are engaged.

The Focus RS will be assembled in Saarlouis, Germany, and joins the F-150 Raptor and Mustang Shelby GT350 in the Ford Performance lineup for North America.