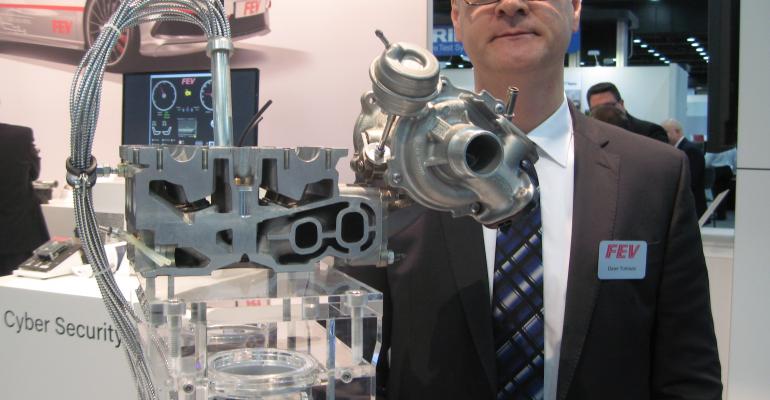 Variable-compression-ratio engines offer yet another way to achieve better fuel economy and reduced emissions without sacrificing performance. Supplier FEV says its system is on the road in prototypes and headed for production.

The company’s 2-stage variable compression-ratio system is now in testing on OEM prototypes on the road primarily in Europe, but also in the U.S., says Dean Tomazic, FEV executive vice president and chief technical officer.

For instance, an engine could operate at a 9:1 ratio under higher loads or at 13:1 under lighter loads. The test prototypes represent a wide range of compression ratios, Tomazic says.

The net effect is an estimated 3%-6% reduction in carbon-dioxide emissions and a similar improvement in fuel economy, Tomazic says.

Tomazic says the FEV system uses either an electromechanical or hydraulically actuated switch to flip a 3-way valve on the connecting rod to change compression modes. The internal valves and rods don’t actually push or pull the con-rod into its different lengths, but rather the system relies on gas-force pressure on the piston to push the rod into the low-ratio mode, while vacuum in the cylinder pulls the rod into the high-ratio position.

Move From Silicon Valley to Detroit Pays Off for Engineering Firm
Jun 15, 2015

Future Engines Will Be Same But Different
Mar 18, 2016