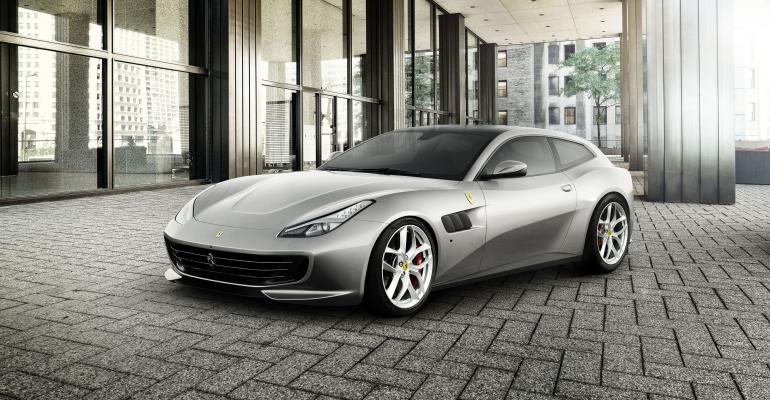 The addition of the new engine to the GTC4 Lusso marks the first time the venerable Italian automaker has offered a choice of two different engines in the same model at one time.

Ferrari reveals a new V-8 version of the GTC4 Lusso featuring the same 3.9L V-8 fitted to the California T and 488 GTB.

The adoption of the new driveline is claimed to cut 176 lbs. (80 kg) of weight in the new model,

largely due to the absence of the GTC4 Lusso’s all-wheel-drive hardware. This reduces the curb weight of the new GTC4 Lusso T to 4,057 lbs. (1,838 kg), some 46% of which is said to be concentrated over the front axle and 54% at the rear, compared with a comparable 47%-53% split for its recently facelifted AWD sibling.

The addition of the new engine to the GTC4 Lusso marks the first time the venerable Italian automaker has offered a choice of two different engines in the same model at one time. The new Ferrari also is the first to offer rear-wheel-drive alongside an AWD setup as found in the existing V-12 powered GTC4 Lusso.

As in the GT4 Lusso, the GT4 Lusso T channels drive through a standard 7-speed dual-clutch transmission. Ferrari says the acceleration of it latest model is enhanced by a so-called variable-boost-management system that eliminates turbocharger lag and provides variable torque curves between third and seventh gears for more a linear delivery of power.

The electronically controlled driving aids are recalibrated to suit the altered engine reserves, with new settings for the GTC4 Lusso T’s 4-wheel-steering and so-called Side Slip Control.

No performance claims for the new Ferrari model have been released. However, it is unlikely to top the heady acceleration of the GTC4 Lusso, which is claimed to hit 62 mph (100 km/h) in 3.4 seconds and reach a top speed of 208 mph (335 km/h).