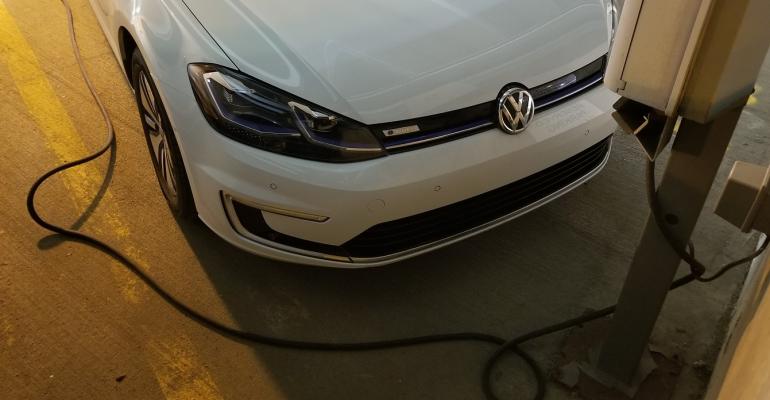 The European Union auto sector, including – for now – the British car-making industry, is criticizing tough new targets proposed by the European Commission for lowering average carbon-dioxide emissions from new cars and vans in the 28-country bloc.

This ambitious schedule involves a desire to see more sales of electric, hybrid, hydrogen and other low or zero-emissions vehicles, and the EC’s strategy does include investment in battery development and refueling infrastructure designed to make this happen.

But the EU’s auto sector contends this is too little, too late, if the European automotive fleet is to be as clean in CO2 terms as the EC would wish.

Erik Jonnaert, secretary general of the European Automobile Manufacturers’ Assn., is particularly concerned about the 2025 target. With it being “just a few years after the 2021 targets, (it) does not leave enough time to make the necessary technical and design changes to vehicles, in particular to light-commercial vehicles given their longer development and production cycles,” he warns.

Moreover, the 30% reduction level proposed by the EC is “overly challenging” and goes beyond Paris climate-change agreement commitments, he argues.

“The European auto industry considers a 20% reduction by 2030 for cars to be achievable at a high, but acceptable, cost.”

In this regard, ACEA welcomes the alternative-vehicle investments proposed by the EC. A tabled action plan on alternative-fuels infrastructure proffers up to €800 million ($949 million) in EU-funded grants, loans and guarantees, leveraging additional public and private investment into developing green vehicle fleets and associated refueling infrastructure.

The EC also says it plans to spend €200 million ($237 million) in EU money supporting European battery development and innovation from 2018 to 2020.

But will this be enough? Jonnaert notes the cost of green vehicles: “Affordability clearly also is a major barrier for many Europeans, underlining the need for harmonized and coherent consumer incentives.”

EU Would Extend Emissions Standards to U.K., Despite Brexit

And while the 2016 Brexit vote may leave the U.K. auto sector outside the EU from 2019, it will need to follow these EU plans to sell vehicles in Europe. Mike Hawes, CEO of the U.K.’s Society of Motor Manufacturers and Traders, notes, “Increasing the take-up of electric cars is not solely within the gift of the industry: major investments in infrastructure and consistent government incentives are essential.”

One of these is written into proposed reforms to the EU directive on clean and energy-efficient road transport vehicles. Changes would write emissions performance into public procurement rules for EU government authorities so that green vehicles are favored within purchasing, renting and leasing programs.

Overall, the EC is sticking to its guns, with its proactive climate-change policy a key plank of the EU’s current executive branch headed by President Jean-Claude Juncker. In a note, the EC argues the plan will “help manufacturers to embrace innovation and supply low-emission vehicles to the market.”

Dismissing automakers’ concerns, the EC says the 2025 intermediary target “ensures that investments kick-start already now.” It adds: “The 2030 target gives stability and long-term direction to keep up these investments. These targets help in pushing the transition from conventional combustion-engine vehicles to clean ones.”

Looking ahead, the EC is considering whether to also legislate reductions in emissions from heavy-duty vehicles, whose CO2 output has been increasing as the European truck fleet grows. This includes commercial vehicles whose weight is 3.5 tons and above. These are complex vehicles, so measuring and controlling CO2 output is difficult. As a result, in ongoing public consultation the EC is asking what is appropriate.

It is asking whether the EU should pass legislation setting CO2 emissions targets for heavy-duty vehicles, as it does for cars and vans; creating a EU CO2 labeling scheme; adjusting vehicle or fuel taxes to encourage the purchase and use of low-carbon vehicles; launching a voluntary agreement with the auto sector to reduce emissions; or leaving policy up to EU member states.

Aware that European truck-manufacturing competitors in the U.S. and China might have less government pressure to reduce their models’ emissions, the European Association of Automotive Suppliers (CLEPA) has signaled a willingness to accept CO2 standards in Europe for heavy-duty vehicles.

However, in a position paper, it says any such laws should be based on a solid understanding of the emissions data: “Reducing CO2 emissions faster will require additional technologies and measures to be implemented. CO2 limits could support the market uptake of these new technologies but must be based on robust data…to establish achievable and ambitious targets that will encourage customers to invest in them.”

As a result, CLEPA wants to see a swift completion and implementation of the EC’s Vehicle Energy Consumption Calculation Tool for HDVs – software that is supposed to estimate CO2 emissions from such vehicles of different categories, sizes and technologies. This, CLEPA says, would “build up…a strong data basis for further considerations.”