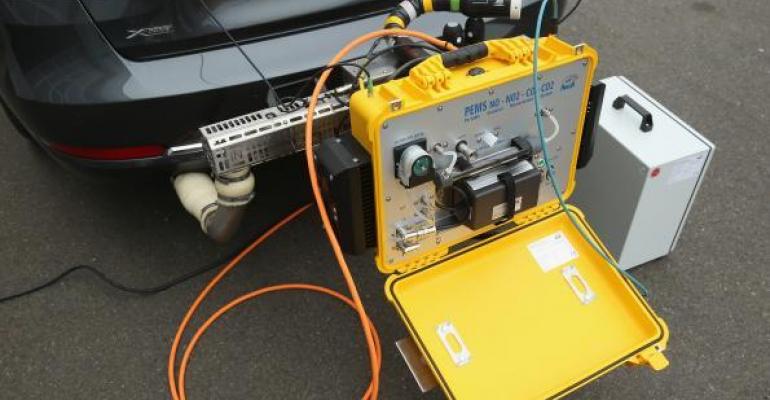 Under its proposals, the Commission would gain powers to withdraw, restrict or suspend national accreditation for test houses found underperforming and too lax in applying EU rules and even could fine them.

BRUSSELS – The European Union’s executive branch, the European Commission, could fine automakers up to €30,000 ($38,900) per vehicle if found cheating on emissions or other tests under reformed type-approval rules floated this week.

The proposals to revamp the EU’s type-approval system aim to prevent a repeat of the Volkswagen Dieselgate scandal that has revealed major holes in the regulatory oversight of vehicle-emissions performance, which is based largely on national-government agencies among the EU’s 28 member states.

Under its proposals, the Commission would gain powers to withdraw, restrict or suspend national accreditation for test houses found underperforming and too lax in applying EU rules, and even could fine them. The Commission’s Joint Research Centre (JRC), an in-house science and technology unit, could retest vehicles granted type approval and launch recalls where needed.

But the Commission would act only if national regulators do not step up to the plate. These regulators would have to review market surveillance activities regularly, making results public.

Elzbieta Bienkowska, the Commission’s vice president-internal market, industry, entrepreneurship and SMEs (small- and medium-sized enterprises), says after the VW scandal it became “obvious the Commission must have some supervising powers.”

Significantly, the Commission did not propose a new EU type-approval agency, Bienkowska points out. “I don’t want a new European institution,” she says.

Instead the Commission wants to chair an “Enforcement Forum” comprised of national regulators that will develop harmonized compliance-verification strategies and organize both joint audits of test houses and peer review of type-approval authorities.

Transport and Environment Clean Vehicles Director Greg Archer says the proposal “lacks teeth,” adding, the VW scandal is a result of the “cozy relationship” between automakers and regulators.

“Without the threat of future EU sanctions, it will be mission impossible to break the strong bond between national regulators and their car makers that has protected the industry at the cost of higher emissions,” he says.

Under the proposals automakers remain free to choose test houses, and type approval is valid EU-wide through mutual recognition. However, payment no longer will go directly to the test house. Instead manufacturers will pay fees set nationally to a national pool from which member states will cover test-house charges plus other costs linked to the new system, such as any additional real-world testing.

Bienkowska makes clear post-market monitoring will be stepped up and national authorities will have to check far more vehicles, not only new models “but actually cars which are driving on our streets.”

Regulators will have to withdraw from the market any vehicles determined to be substandard via the spot checks. Bienkowska compared this to current regulations in which “we don’t have any powers to even ask member states (to force a stop-sale or recall any non-compliant vehicles).”

Monique Goyens, director general of European consumer organization BEUC, says the spot checks on existing vehicles are “much needed, and if implemented well, should deter against cheating.

“It is crucial that the cozy relationship between car makers, national authorities and testing services is broken up,” she says. “Without radical change to the approval system of passenger cars in Europe, the next car-emission scandal is bound to happen again.”

While Jyrki Katainen, the Commission’s vice president- jobs, growth, investment and competitiveness, argues the proposal should help stop cheating, he admits this will not be a certainty. But a “person must be a really pathological case” to cheat under the new system, he says.

Reactions were mixed from European Parliament members. The center-right European People’s Party – the largest political group – continues to call for greater European oversight, while the European Conservative and Reformists – typically wary about the extension of EU powers – complain about what they regard as a threat to the independence of member states.

Dutch Green Bas Eickhout sees a shift towards a more European approach to testing and approvals as “absolutely necessary,” but stresses the revision is just a proposal. “It remains to be seen if EU governments, which have continually blocked stricter regulation of the car industry, will play ball.”

Both the parliament and governments, through the EU Council of Ministers, must approve the proposal for it to go forward.

The chair of the parliament’s influential environment, public health and food safety committee, Italian MEP Giovanni La Via, also urges governments “to seize the opportunity and work constructively with us. The lessons of the scandal have to be learned. The type-approval procedure should be independent, transparent and effective, and this new proposal will lead to a much improved surveillance.”

A spokesman for ACEA, the European automobile manufacturers’ group, tells WardsAuto the organization “welcomes any new ideas on improving the current system of type approval,” but says more analysis of its implications on the industry are needed. “We trust that the proposal will take a balanced approach, respecting the principles of better legislation.”

The key question now is whether the proposals go far enough to stop EU lawmakers from vetoing a new real driving emissions (RDE) test for nitrogen oxides in a vote set for Feb. 3. RDE uses portable emission measurement system, or PEMS, to check tailpipe emissions when the car is on the road, rather than in a laboratory. But the proposal has met with some controversy, because it includes a conformity factor that initially would allow emissions to exceed twice the legal limit.

The Commission contends it is a 3-part package – RDE for NOx, revamped type approval and planned RDE extension to monitor other pollutants – that together will lower emissions and clean up Europe’s auto industry.

“It would be very good if everybody could see the big picture,” Katainen tells reporters here.

But Eickhout sums up the feelings of many MEPs, saying the proposals “should certainly not be viewed as some kind of trade-off to the European Parliament in exchange for parliament approving the fundamentally flawed decision on the conformity or compliance of real driving condition tests for pollutant emissions,” he says, urging MEPs to “be consistent and reject the scandalous decision” next week.

German socialist MEP Matthais Groote tweeted there had been “no serious movement” on RDE after negotiations with the current president of the Council of Ministers (which is the Dutch government until July) and the Commission. “Left with no choice but to support the objection in plenary,” he concludes.