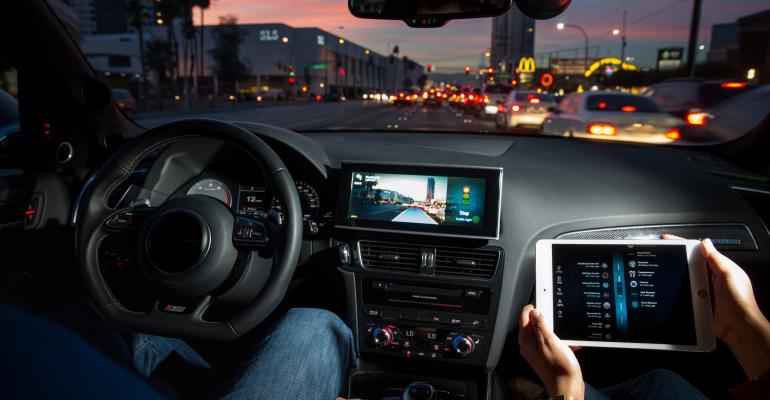 The electronics supplier also sees demand for autonomous-vehicle technologies, but says a fully self-driving car isn&rsquo;t needed to achieve most of the sought-after safety benefits.

TROY, MI – Supplier Delphi is decidedly bullish on the impending switch to 48V electrical architectures, predicting as many as 8 million vehicles equipped with the higher-voltage wiring systems will be produced worldwide in 2025.

Executives say moving to 48V is the most likely path as automakers seek to meet upcoming fuel-economy and emissions requirements around the world.

A basic 48V mild-hybrid system, consisting of a 48V lithium-ion battery, controllers for the battery and hybrid powertrain, a DC/DC converter and an electrically driven turbocharger, will be part of an array of advanced technologies Delphi will show off at the CES consumer-electronics show in Las Vegas in January.

Delphi also will demonstrate the latest version of its autonomous-vehicle technology that already has piled up more than 3,400 self-driving miles (5,471 km) on public roads across the country, producing some 50 terabytes of research data for the supplier.

Speaking during a backgrounder at Delphi’s U.S. headquarters, Jeff Owens, executive vice president and chief technical officer, says 48V “is becoming an extremely attractive lever we think that OEs will be pulling around the world. It will be a lever we think will be pulled very, very hard.”

The European market will lead the movement to 48V, driven by new emissions requirements that take effect in 2021, predicts Mary Gustanski, vice president-engineering and program management. China, which is dealing with severe smog issues that shut down its capital city of Beijing earlier this month, will be close behind.

Because mandated U.S. fuel-economy requirements don’t reach their peak until 2025, the market will be the laggard of the three, she suggests.

Delphi’s 48V hybrid system is expected to be available for production in 2017, but 2020 is when business “really picks up,” Gustanski says.

Numerous suppliers are developing 48V systems, including such key Delphi competitors as Continental and Valeo, and Gustanski says there likely won’t be a big difference between what component makers have to offer in the initial development phase.

Delphi says such systems will deliver 70% of a mild hybrid’s fuel-economy advantage at 30% of the cost, expected at about $1,000 to the OEMs. About a 15% fuel-economy improvement is expected beyond the 15% that comes from downsizing to a gasoline direct-injected engine with turbocharging and variable valve timing, according to Gustanski.

Owens says Delphi will release road-test data on the real-world fuel-economy improvement offered by its 48V powertrain system during CES.

Most if not all initial 48V systems will be designed around the powertrain, leaving the rest of the electrically driven components to continue to operate on a 12V electrical architecture and conventional lead-acid battery.

But once that dual-voltage system is in place, automakers can begin moving more and more components to 48V. Likely first targets are high-power-draw items such as coolant pumps, air-conditioning compressors and adjustable suspensions, Gustanski says.

“The base 48V systems (offered by suppliers) will be identical, with e-chargers (electric turbos) and a 10%-15% gain in fuel economy,” she says. “The next step is where you’ll see differentiation, where we optimize the electrical architecture.”

The future for 48V is much more near-term in the eyes of Delphi executives than is the fully autonomous car, although the supplier sees strong demand for the technological building blocks ultimately needed for self-driving vehicles over the next few years.

Delphi’s fully autonomous car to be demonstrated at CES features some 20 sensors, including six solid-state LiDAR (laser-based) sensors used to better detect objects and infrastructure elements in even inclement weather.

Owens says Delphi and development partner Quanergy are targeting a cost of $250 for the small LiDAR units that easily can be packaged into the vehicle and provide a near-360-degree view of its surroundings. That compares to as much as $75,000 for today’s mechanical LiDAR systems, those spinning devices seen mounted on the roof of many of today’s autonomous test vehicles.

Only four of the solid-state sensors would be needed on a production vehicle to supplement radar and other sensors already onboard. Delphi and Quanergy will conduct prototype testing over the next 18 months on the solid-state LiDAR sensors, with mass production targeted for 2019.

Delphi’s second-gen autonomous test vehicle, a converted Audi SQ5, does a better job of detecting pedestrians and other vehicles in the vicinity, connects to smart stoplights for better traffic management and can be summoned from parking spots to pick up passengers.

But Owens says that with safety the key driver in the technology’s development, most of the life-saving advantages can be realized without going all the way to fully autonomous vehicles.

The industry foresees the march to fully autonomous occurring in four phases. Automakers currently are in the second phase, having introduced such features as automated braking and low-speed hands-on automated steering. The next step calls for more automated systems, such as on-highway auto piloting that will return control to the driver at key intervals, and the fourth phase would allow full-time autonomous driving without human intervention.

“The technologies that we have right now, and many of them are on the road today, literally can put those scenarios (of zero fatalities) within reach.”

Delphi suggests its track record at CES bodes well for the adoption of such systems. About 60% of the features of an advanced-technology car it exhibited at the confab 20 years ago, such as blindspot warning and automated braking, now are in production. The adoption of technology in its current concept is likely to occur at an even faster rate.

“The digital curve, as it comes into our lives in all shapes and forms is really forcing the convergence of the tech sector and automotive,” Owens says. “The clock speeds are getting closer and closer together.”

Electrification Move May Point Toward Another Win for CPT
May 08, 2015

Automakers Have Breathing Room on Autonomous, Other Trends, But Just a Little
Nov 16, 2015