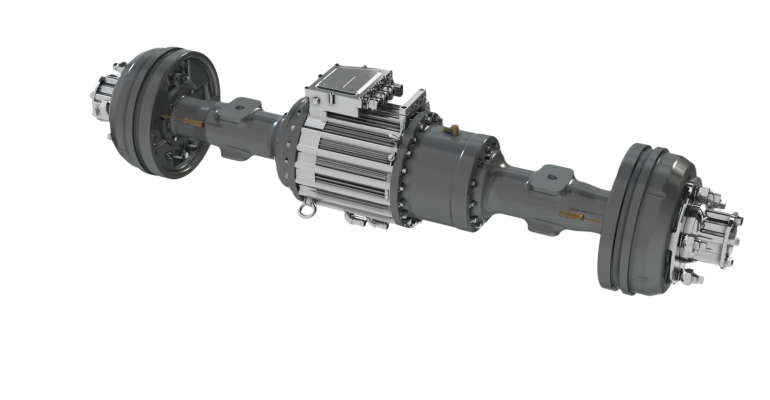 Spicer e-Drive eS5700r is first in production and headed for application in a medium-duty Dongfeng vehicle.
Engines

The new electric-drive system, targeted at Class 3-6 commercial vehicles, is said to be the first on the market that integrates an electric motor with a rigid axle in a single package.

NOVI, MI – Executives at U.S.-based Dana express high hopes for a first-of-a-kind electric-drive e-axle for medium-duty trucks, as production gets under way in China.

Displayed here at the CTI Symposium U.S.A. on advanced automotive technology, the e-Drive axle is a product of Dana’s Dongfeng Dana Axle joint venture with Dongfeng Motor in Xiangyang, China. The component gets its first application on a battery-electric Dongfeng commercial vehicle.

There are other bolt-on electric-drive solutions like the Spicer-brand product and others are working on similar concepts, but officials say for now the Dana technology is unique in combining an electric motor and rigid rear axle in a single streamlined module.

Combining the motor with the axle is said to shave about 220 lbs. (100 kg) off the weight of more conventional battery-electric commercial-vehicle propulsion systems that generally rely on a large, centrally positioned motor and require a prop shaft to transfer power to the rear wheels. The Spicer e-Drive axle is designed to “drop in” to existing suspensions, making it easier to package within any commercial-vehicle architecture. The space freed up by the elimination of the prop shaft allows for installation of a bigger, longer-range battery if desired.

“Normally, you’d look at this at 370 kg and say, ‛That’s a big, heavy axle,’” Seth A. Metzger, vice president-Light Vehicle Engineering for Dana, tells WardsAuto. “But this replaces the entire engine, transmission, prop shaft and axle system and everything that supports it. That’s where we were able to get a really significant mass savings.”

Earlier this month, Dana revealed it had signed a deal with U.S.-based electric-vehicle and truck-chassis producer Workhorse Group to develop a city delivery vehicle utilizing the ES9000r e-Drive axle.

The new eS5700r e-axles are being produced in China with 100% local content and are the result of five years of development work by the JV there.

“We designed this basically for the Chinese bus market. That’s how everything started five years ago,” says Michael Lembke, senior director at Dana and considered the father of the e-Drive axle.

“Back in the day, the electrification trend in China started with buses, with the government basically heavily subsidizing city buses to be electrified,” says Lembke, who initiated the program in response to that trend while serving as general manager of the Dongfeng Dana JV.

The Dana executives won’t forecast sales for the e-Drive axle but say China overall is moving in the direction of electrification in the commercial-vehicle sector, particularly in the bus market.

“In China, (electric-bus sales) are heavily dependent on the subsidies,” Lembke says. “So if you look at it over the last five years, they came and went in waves. Depending on when the subsidies come in…(sales) go up for two or three months and then they come down.

“(But) the trend is upwards – they’re talking about having (sales of) 300,000 electrified commercial vehicles (annually) by 2023, (including buses). So it is without question the largest commercial-vehicle electric market in the world.”

DDAC is the largest truck axle supplier in China in terms of volume, with capacity for up to half a million axles annually. The JV will be the sole producer of the e-Drive axle for now, but Dana executives see additional opportunities in Europe, the U.S. and especially in India that could lead to additional capacity in other regions.

“Right now we want to see what happens in India, what happens in the U.S. and Europe,” Metzger says. “If there’s enough demand, we may localize. Right now, it’s a bit of a wait-and-see.”

Cost is above more-conventional technology, but Dana officials say they expect that gap to close and point to the e-Drive’s weight and packaging benefits that may make the axle worth the premium to commercial-vehicle producers.