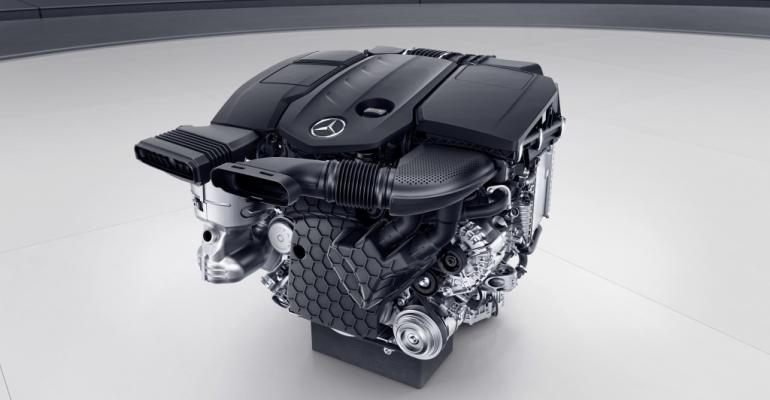 The automaker says diesels are critical to meeting European CO2 targets, and the engines remain popular even in the face of recent emissions scandals.

DETROIT – Daimler’s push into vehicle electrification won’t spell the near-term demise of the diesel. Quite the contrary, a top official says.

“For the European market, in our view, especially when we talk about (carbon-dioxide emissions) compliance, the diesel remains extremely important,” Ola Kaellenius, board member in charge of group research and product development for Mercedes-Benz Cars, says, noting diesels offer a 15%-20% advantage in CO2 emissions over gasoline engines. “And that is why we have continued investing in the diesel.”

In a wide-ranging discussion with media at the North American International Auto Show, Kaellenius spells out Daimler’s game plan for meeting increasingly stringent fuel-economy and emissions regulations, a strategy that relies heavily on battery power.

The German automaker has pledged to electrify its entire lineup and launch a lineup of battery-driven models under the new EQ brand and turn Smart into an electric-only line of vehicles. Daimler will spend at least $11.7 billion on electrification over the next several years to produce 10 BEVs and 40 hybrids beginning in 2022.

Whether that strategy works to meet 2020-2021 CO2 regulations in Europe will depend entirely on market reception, executives admit.

“I can’t guarantee we will be compliant,” CEO Dieter Zetsche told reporters here earlier. “Our objective is to be compliant...but not every parameter is under our control.”

The next-generation powertrain plan includes more than electrics, however, Kaellenius notes, as Daimler continues work to upgrade all of its internal-combustion engines with a new modular family of gasoline and diesel powerplants. That program kicked off with the OM 654 2.0L 4-cyl. diesel in the E-Class in 2016 and continued with the rollout of the 3.0L inline 6-cyl. diesel in the S-Class last year.

From there begins the electrification drive, with Mercedes planning a wide rollout of 48V mild hybrid technology – a movement getting under way with the S-Class’s new 3.0L 6-cyl. gasoline engine with integrated starter-generator system.

“We will proliferate the 48V technology pretty much across the board of the portfolio (in the next few years),” Kaellenius says. “That’s the next layer.”

That move will be followed by a next-generation lineup of plug-in hybrids. The PHEVs will see electric-only range increase to at least 31 miles (50 km) from 19 miles (30 km) today, a jump Daimler expects to drive higher volumes.

“We think the plug-in hybrid story becomes more relevant, because you have a bigger use case,” Kaellenius says. “If you go up to 50 km, in most cases, you can go to work (and back) fully electric. And if you want to go longer distances on the weekend you still have the option of the combustion engine.”

Mercedes also plans what Kaellenius calls a “power hybrid” that puts the emphasis on added performance over fuel economy, noting the AMG GT concept shown in Geneva in March is a “good candidate for the first power hybrid from AMG.

Don’t overlook the market potential for diesels, however, Kaellenius says, pointing to increased sales in Europe for Mercedes last year, despite all the negative attention from industrywide emissions scandals. The new OM 654 meets Europe’s new RDE1 (Real Driving Emissions) standards and is being readied to comply with RDE2 regulations in 2020.

“I think the OM 654…was the first diesel in the world that came into real-world-driving emissions (compliance) under the legislation,” he says. “I think we’re taking a really big step there. And we’re going to continue developing this technology for Europe.

“We are actively marketing the new generation of diesels at the point of sale,” Kaellenius adds. “In the end, point of sale is the most important place for that discussion. The customer recognizes the benefit of the technology and also sees that on the emissions side there’s been a very big step.”

Daimler, which reportedly invested $255 million in the new diesels, has built in flexibility to respond to any sudden market shifts. The 4- and 6-cyl. diesels are part of a new modular family that includes gasoline 4- and 6-cyl. engines, as well, all with identical bore spacing that enables them to be manufactured on the same lines.

“You can flex (production) between gasoline and diesel,” Kaellenius says. “We have the OM 654 diesel engine, we now have its bigger brother that launched in the facelifted S-Class last summer and we have the sibling of that, the new inline 6-cyl. (gasoline) engine which comes with a 48V system. And that eventually will (spawn) other 4-cyls.”

Kaellenius says all this should add up to Daimler achieving Europe’s 2020-2021 CO2 targets of 95 g/km – if the market cooperates.

“(This) is a very big technical strategy,” he says of the automaker’s powertrain program. “The more (the market tilts) toward fully electric or plug-in (vehicles), the easier it would be to achieve (targets).

“You can have a very broad (product) offering…and (still) it’s a big challenge to get there. There’s no question about it.”

New Mercedes G-Class Changes Mostly Everything and Almost Nothing
Jan 14, 2018