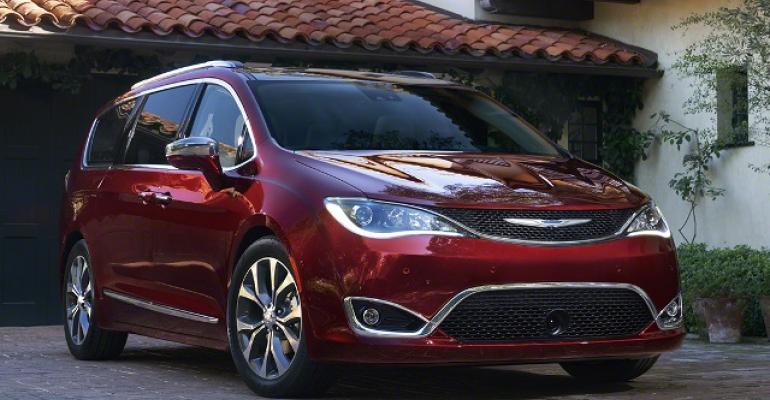 The &rsquo;17 Chrysler Pacifica minivan gains in all measures of fuel economy, but the bigger jumps come later this year when additional efficiency measures are added, including stop/start technology and a plug-in hybrid.

The highway fuel economy ties Pacifica with the ’16 Honda Odyssey, but the big jump will come on the city side of the equation when efficiency gained from stop/start operation could boost the Chrysler’s urban fuel economy to an estimated 19-20 mpg (12.4-11.8 L/100 km). The higher figure tops by 1 mpg (.04 km/L) the Odyssey’s 3.5L V-6 that incorporates variable cylinder deactivation but does not employ stop/start.

Chrysler isn’t saying what it expects to gain from stop/start operation, but estimates range from as low as 2%-4% by the EPA to 7% in real-world testing by AAA. Automakers incorporating the technology have often touted fuel-economy improvements in the 8%-10% range.

If stop/start helps the Pacifica achieve an 8% gain in city driving, that would push its city rating past 19 mpg, for an overall city mileage improvement as high as 14%, while its combined fuel economy would top 23 mpg (10.2 L/100 km). Stop/start typically improves efficiency in city driving where stopping in traffic is common.

Use of lightweight aluminum, magnesium and high-strength steel contribute to a 250-lbs. (113-kg) weight reduction, while the sleek body styling achieves a 0.30 drag coefficient that Chrysler says is best among its competitors, including Odyssey, Toyota Sienna and Nissan Quest.

Chrysler isn’t specifying when stop/start technology will roll out on the Pacifica, but promises it will precede the arrival of the Pacifica Hybrid in second-half 2016. The plug-in hybrid minivan, an industry first for the segment, is expected to provide up to 30 miles (148 km) of electric-only operation and up to 80 mpg-e (2.9 L/100 km).