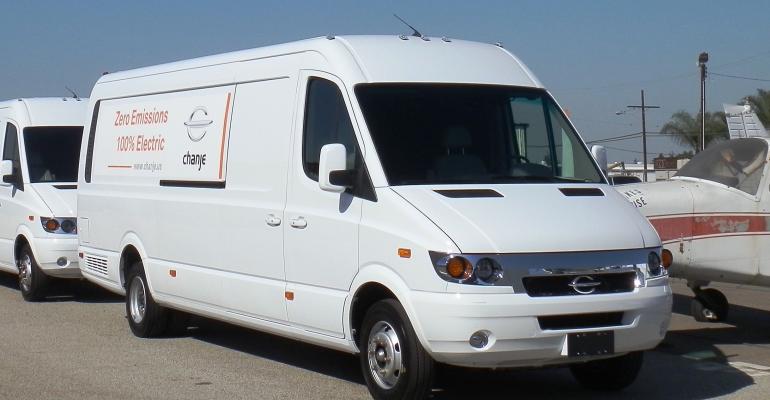 Ryder, which owns and leases commercial vehicles, is the exclusive sales and service network partner for Chanje. Vehicles will be available at Ryder locations in strategic U.S. markets by year&rsquo;s end.&nbsp;&nbsp;

FULLERTON, CA – In a parking lot beside the huge warehouse at a private airport south of Los Angeles, the big white vans sit somewhat incongruously among a few smaller private planes. The vans, with the not-too-sexy name V8070, are the flagship model from Chanje, a new commercial-electric-vehicle maker.

Chanje (pronounced “change”) is owned by a Chinese company, but it aims to make big inroads into the U.S. fleet market. It sees itself fulfilling an unmet need.

Ryder, which owns and leases commercial vehicles, is the exclusive sales and service network partner for Chanje. Vehicles will be available at Ryder locations in strategic U.S. markets by year’s end.

Ryder has some 800 facilities in North America, says Chris Nordh, director-global fuel products for Ryder. “These trucks fit very well into our portfolio,” he says.

Ryder already sees customer interest in the Chanje V8070, Nordh says.  Those potential buyers are interested in “how using EVs can lift their profile and affect their pricing power.”

Translation: Some businesses are interested in marketing themselves as environmentally friendly, and some want to save money.

“Everybody has a slightly different profile or need.”

Ryder also is preparing for the future by adding EVs to its vehicle options, Nordh says. “The electric motor has a very significant (role to) play” in future transportation needs, he says.

Chanje’s investors include Smith Electric and FDG Electric Vehicle. FDG is a Hong Kong-listed firm based in mainland China. It was formed by combining various EV assets, which includes Sinopoly, the battery supplier to Chanje.

The name Chanje is a play on Changjiang, the Chinese name of an EV produced by FDG in China.

Initially, production of the V8070, and perhaps future Chanje vehicles, will occur at a greenfield plant the JV built in the Eastern Chinese city of Hangzhou, Hansel says. The vehicles will be shipped to the U.S. as completely knocked-down kits and assembled at a plant whose location will be announced within several months, he says.

The CKD approach gives Chanje the flexibility to ship the vehicle to different locations, even different countries, Hansel says. “The key is to get things into containers,” he says. “It gives us the opportunity to increase local content if needed.”

Demand will determine when Chanje may begin producing units in the U.S., Hansel says. “There is an economic tipping point.”

Hansel is confident there will be adequate demand to justify local production in the U.S. He predicts thousands will be on American roads within the first year of availability.

Chanje is “heavily promoting” leasing as the ownership model, and the cost in the first month of use will prove to be the same as a traditional fuel vehicle, Hansel says.

The firm sees itself as more than just an EV manufacturer; it also aims to be an “energy services provider.”  Chanje is developing a fleet depot model that includes energy generation, storing and charging all in one location.

Future models will include bi-directional charging so Chanje can sell energy back to the grid, says Suresh Jayanthi, Chanje’s vice president of energy services. “We have been spending time with the power providers in California to look at storage and self-generation options,” he says.

This holistic business model will be Chanje’s biggest advantage for customers with fleets of 100 units or more, Hansel says. “You are just buying energy, not making that big capital investment.”