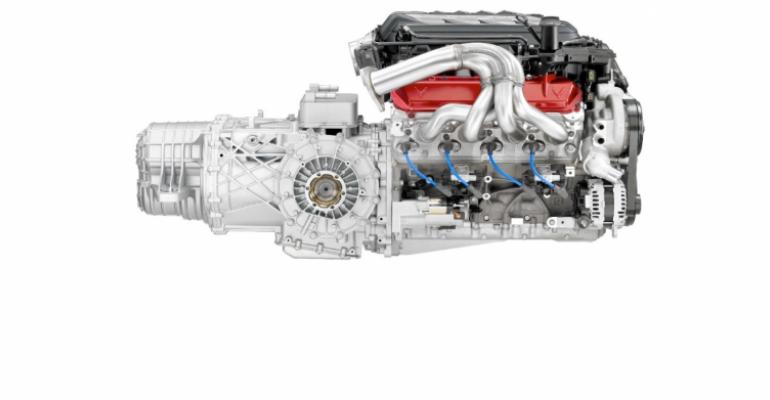 Tidy on the outside, innovative inside, the new Corvette small-block engine packs a 495-hp punch.

Wards editors recently got to drive the all-new ’20 Chevrolet Corvette for Wards 10 Best Engines & Propulsion Systems testing of the new LT2 V-8. Winners will be announced next month. The new Corvette arrives in dealerships in February.

Given the astute design and engineering invested in the 2020 Chevy Corvette Stingray (pictured below, as tested), there’s a tendency to gloss over the engine’s role beyond the fact that it now resides behind the driver.

That would be a mistake.

While it’s true the LT2 hails from the long line of small-block V-8s, this child prodigy is endowed with exactly what it needs for success in its most ambitious application.

The traditional small-block architecture – 4.4-in. (111.7-mm) bore-center spacing with one camshaft in the block and two pushrod-operated valves per cylinder – carries over.

Likewise, LT2 cylinder heads are the same as those developed for the direct-injected 460-hp LT1 V-8 powering base C7 Corvettes. The LT1 won Wards 10 Best Engines trophies in 2014 and 2015.

Variable valve timing, achieved by altering the phase relationship between the cam and crankshaft, and General Motors’ Active Fuel Management (shutting down half the cylinders during cruising to improve mileage) also carry over from previous small-block V-8s.

Otherwise, the LT2 is a clean-sheet design.

The new cast-aluminum block is configured to make the most of an innovative dry-sump lubrication system delivering several performance benefits.

Moving the oil supply from a pan bolted to the bottom of the block facilitates mounting the engine 1 in. (25.4 mm) lower in the car. Windage losses caused by the crankshaft spinning through the air-oil mist are greatly reduced.

The new Corvette’s molded plastic 7.5-quart (7 L) oil reservoir is bolted directly to the left-front corner of the engine to eliminate external lines susceptible to leakage and pressure losses.

The LT2 block’s side surfaces have new reinforcing ribs, engine mount locations and pads for locating the ignition coils (previously attached to the valve covers) out of sight beneath the upward sweeping exhaust manifolds.

The crankshaft is forged from a stronger S38 alloy steel to sustain greater output. As before, connecting rods are powder-metal forgings. 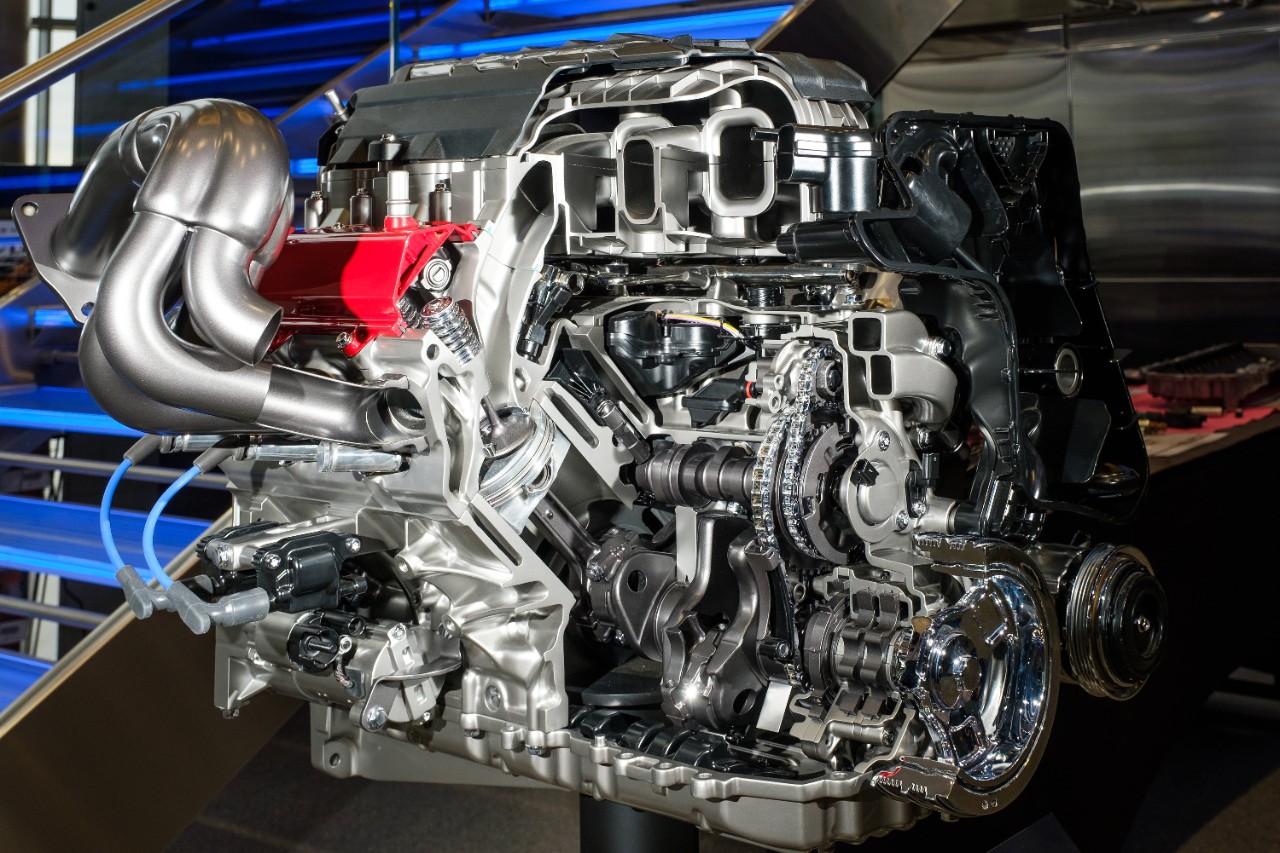 Another breakthrough feature is a “dry” valley between the cylinder banks. Instead of allowing oil from the heads and hydraulic valve lifters to drain down past the crankshaft, it’s stopped by a closed valley floor, scavenged by a cam-driven gerotor pump, and returned to the oil reservoir. This further reduces oil frothing and windage losses in the crankcase.

The previous LT1’s intake manifold is compromised by the fact that excessive height would hamper the front-engine Corvette driver’s forward visibility.

Since the LT2 is mounted lower in the car and behind the driver, engine designers took advantage of the extra room to create an intake manifold some 3 ins. (76.2-mm) taller than before.

While the previous intake runners were two different lengths due to space considerations, the new runners are all 8.27 ins. (210 mm) long. and plenum volume has been increased a worthwhile 19%. 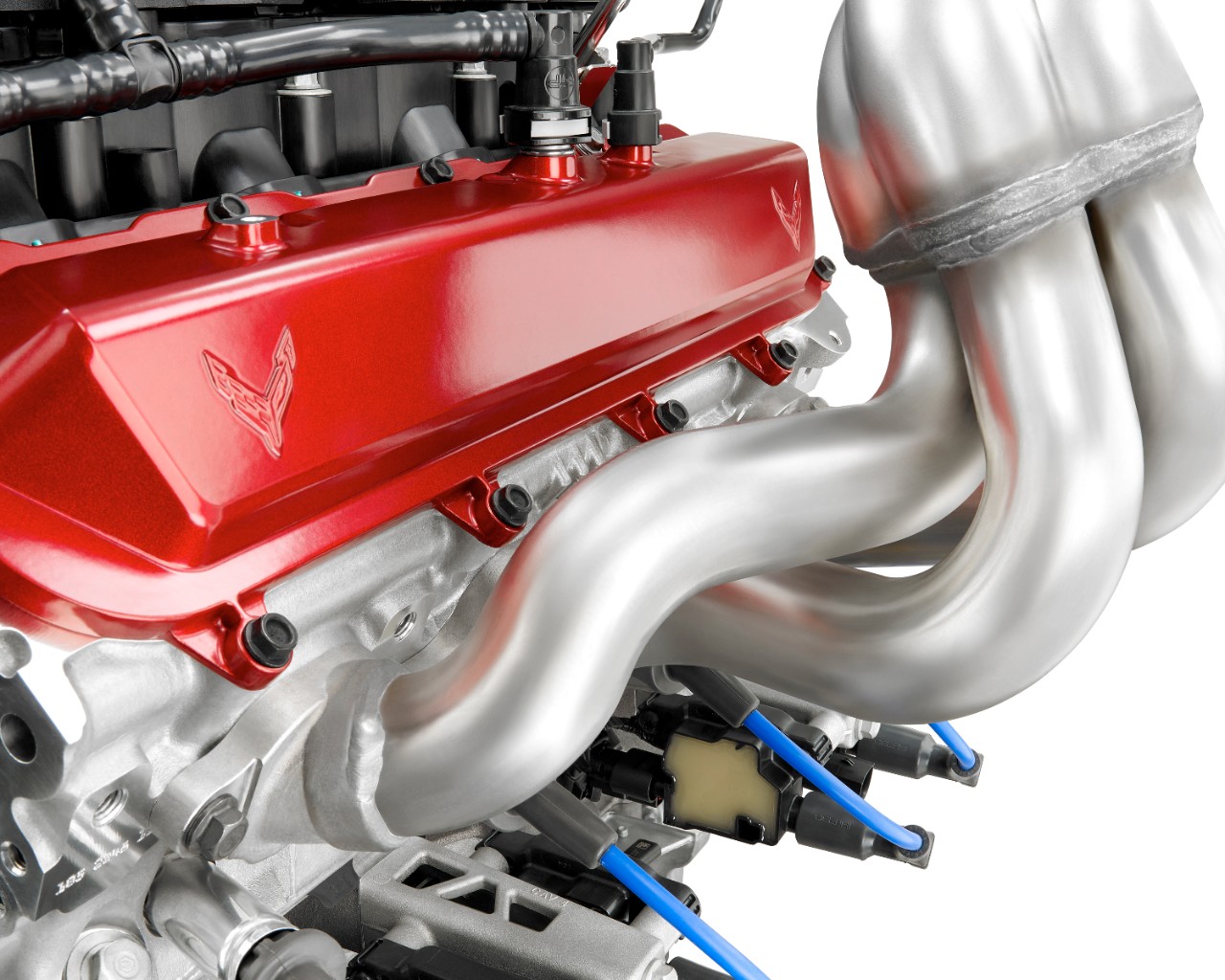 The 3.42-in. (87-mm) throttle body is the same diameter as before but now aimed toward an air filter located at the rear of the vehicle. The net result is a 4% increase in airflow yielding 3% better performance.

The only drawback with the “runners in a box” intake manifold manufactured by friction welding together four plastic moldings is an appearance that’s not becoming. The top surface, ribbed to increase stiffness and suppress noise, resembles an ice cube tray.

Designers also helped tune the shape and finish of the LT2’s stainless-steel exhaust header heat shields which sweep majestically up and to the rear of the car before merging just ahead of round-section catalytic converters.

The nicely presented valve covers (pictured above) are painted a color GM has nicknamed Venthan Red as a tribute to their designer Ezhilventhan Sivanesan. 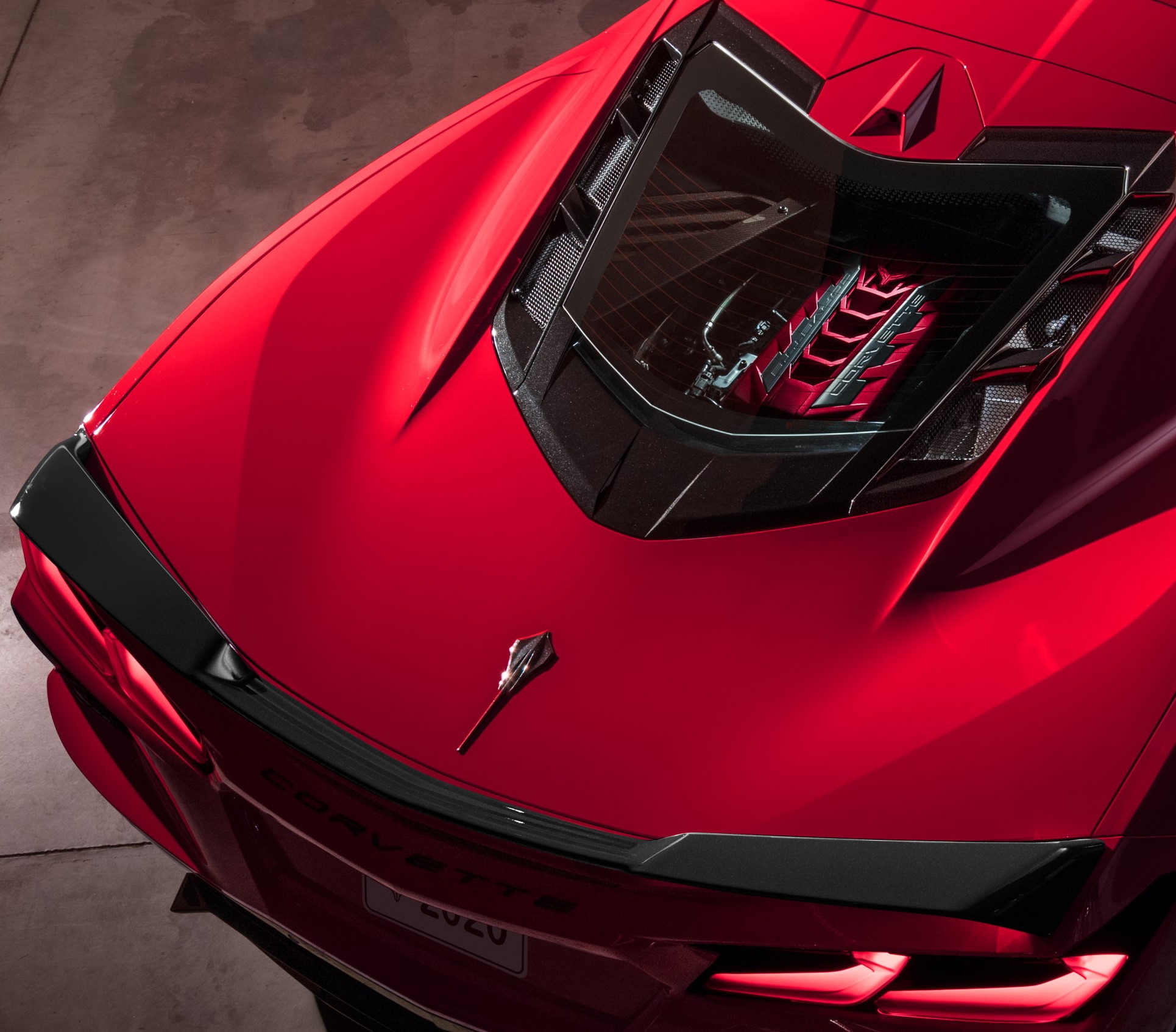 The official name for the color – Edge Red Metallic – also is used on brake calipers. No one is saying whether the designer was inspired by Ferrari’s distinctive testa rossa (red head) cam covers.

The higher volumetric efficiency achieved with the new LT2 intake and exhaust plumbing was fully exploited on the dyno with more aggressive valve timing. Maximum exhaust valve lift was increased from 13.5 to 14.0 mm and valve duration was increased by 18 degrees.

The fuel cut remains at 6,600 rpm. It should be noted that midrange output – between 2,800 and 4,500 rpm – is slightly lower than in the LT1. That concern is alleviated by the closely spaced gear ratios provided by the standard 8-speed dual-clutch automatic transmission.

The bottom line is that the new LT2 V-8 is instrumental in achieving true supercar performance: acceleration to 60 mph (97 km/h) in 3 seconds or less with a top speed over 190 mph (306 km/h) while keeping the base price of $59,995 within the reach of traditional Corvette customers. 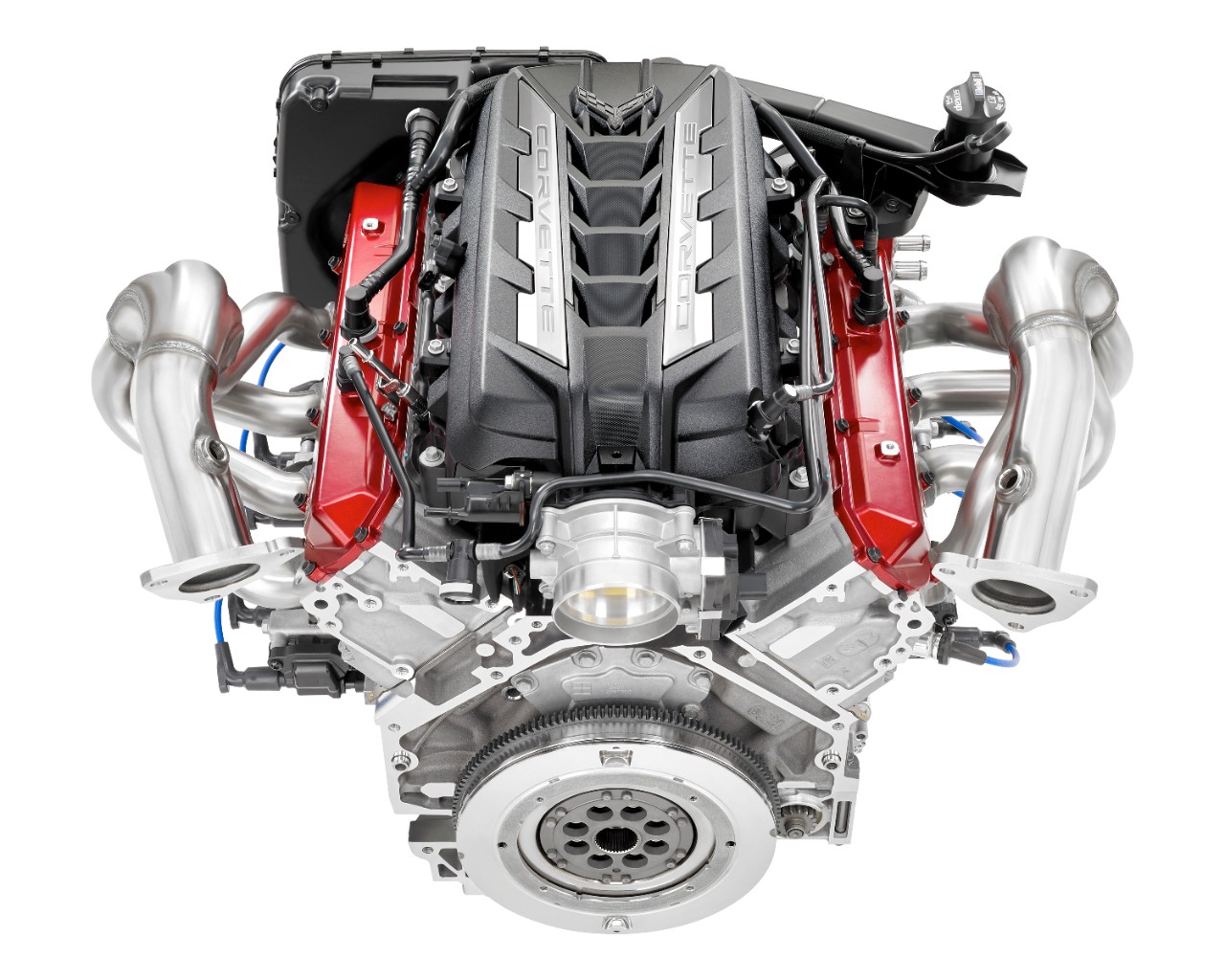