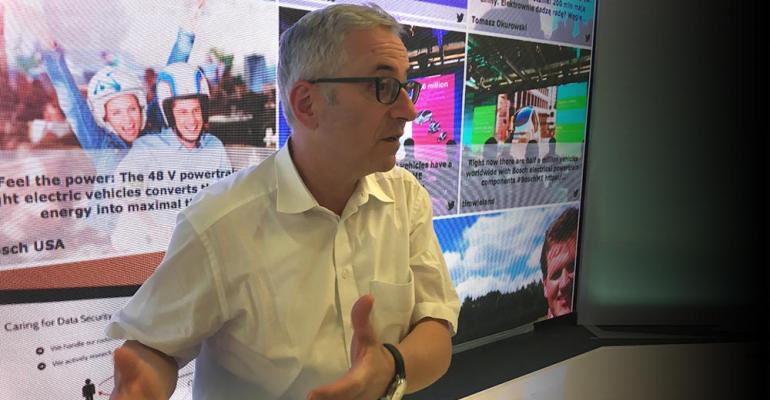 BOXBERG, Germany – If you think there is no future for diesel as automakers migrate away from the technology to electrification, think again, says Bosch executive Rolf Bulander.

“Combustion engines and electric motors will coexist for many years to come,” Bulander says during remarks here ahead of a deep dive into the global supplier’s vast automotive product portfolio, which ranges from diesel and gasoline engine parts to electric-drive units and a host of emerging connectivity and mobility-services solutions.

The two technologies must live alongside one another, he says, because the ramp-up to mass-market battery-electric vehicles will be long and gradual. BEVs and plug-in hybrid-electric vehicles accounted for less than 1% of global industry sales last year. If China were removed from the total those technologies would account for less than 0.5% of sales.

At the same time, governments around the world have committed to strict future clean-air goals achievable only by further slashing light-vehicle tailpipe emissions. France, for example, earlier this month announced plans to end sales of petrol- and diesel-powered cars by 2040.

“We have to pull out all of our engineering stops, which means that we still have to improve diesel and gasoline engines,” says Bulander, a member of the board of management at Stuttgart-based Robert Bosch and chairman of the company’s Mobility Solutions business sector.

​Bulander says by focusing on items such as friction reduction and optimized combustion the industry can increase the efficiency of diesel and gasoline engines 10% in coming years, which given the relative population of ICE-propelled vehicles compared with EVs would make a significant contribution to cleaner air.

“Let’s be realistic; we need more than electrification,” he tells WardsAuto, adding that the greater energy density of diesel fuel gives it a significant advantage over gasoline.

Diesel is becoming increasingly cleaner, too, he says. Bulander cites broader use of selective-catalytic-reduction technologies globally, as well as emerging nitrogen oxide storage converters that remove the most harmful diesel pollutants.

“The technology is available to meet emissions requirements,” he says. “It’s only a question of how fast the (vehicle) population can be changed.”

Bulander declines to speculate how the shift away from diesel by major automakers such as Volkswagen will affect profitability at Bosch, which is easily the world’s biggest supplier of the technology, because the timetable for mass-market electrification remains unclear. He also does not say whether the company’s leap into electrification, which Bulander estimates at €400 million ($462 million) in R&D spending annually, will make up for what stands to be lost in diesel business.

The longtime ICE technology executive does have a word of advice for OEMs looking to add plugs to their products: Go small.

“The smaller you make a battery, the cheaper the car,” he says. “So we believe there’s an alternative with smaller cars with shorter range.”

Bosch is betting big on a rapid evolution of small EVs. The supplier estimates 100 million light EVs, including scooters and small 4-wheeled cars, will be produced worldwide by 2020. Dense urban areas of Asia, where 30 million electric scooters are sold annually, will lead in the adoption of the 2-, 3- and 4-wheeled vehicles.

The propulsion system uses off-the-shelf automotive components, so established OEMs and startups both could bring small electric vehicles to market in a brisk 12-18 months, he says.

While Bosch is jumping into the future of mobility with both feet, Bulander says it will not change the company’s somewhat quirky structure. Unlike competitors such as Continental, Delphi or Denso, Bosch is a privately held company. It does not have shareholder obligations in the traditional sense, either, and its profits are returned to a charitable foundation to fund a litany of social endeavors that fit the vision of its late founder Robert Bosch.

While many suppliers and OEMs have begun spinning off their new-mobility units or reporting the performance of those ventures separately to give investors a clearer view of their business, Bosch plans no such restructuring. It recently consolidated its powertrain and electro-mobility business under the mobility solutions group.

The Bosch Group last year reported sales of €73.13 billion ($85.08 billion), with $43.94 billion ($51.14 billion) coming from mobility solutions. Its other groups include industrial technology, consumer goods and energy and building technology.

“We strongly believe that, with a combination of different domains, we have advantages,” Bulander says.

There is a note of irony among the various technical displays on Bosch’s proving grounds. One area is reserved for a trio of Volkswagen Golfs outfitted with Portable Emissions Measurement Systems for journalists to attempt surpassing Euro 6 diesel-emissions levels in everyday driving, which until the European Union added the Real Driving Emissions test to its regulations was hardly difficult.

In fact, the longtime and overwhelming discrepancy between laboratory diesel-emissions test results and real-world emissions led investigators to uncover the Volkswagen cheating software. Bosch wrote the code for VW to beat the regulations and paid a $327.5 million U.S. fine for its role in the conspiracy.

But the RDE test going into effect in September is meant to eliminate the gap between laboratory and real-world test results with a focus on NOx emissions. Bosch is so confident of the RDE’s effectiveness it hooked up the Golfs with PEMS units and to demonstrate no matter how hard the cars were driven, which should lead to increased NOx emissions, no driver could exceed Euro 6 limits.

And for all the electrified technology on hand, the arguable showstopper was a Porsche Panamera 4S using Bosch-sourced diesel technology for a whopping 422 hp and 627 lb.-ft. (850 Nm) of old fashioned tire-shredding indulgence.

So while Bosch’s role in future mobility remains to be played out, the Panamera proves it continues to have a strong grip on the here and now.