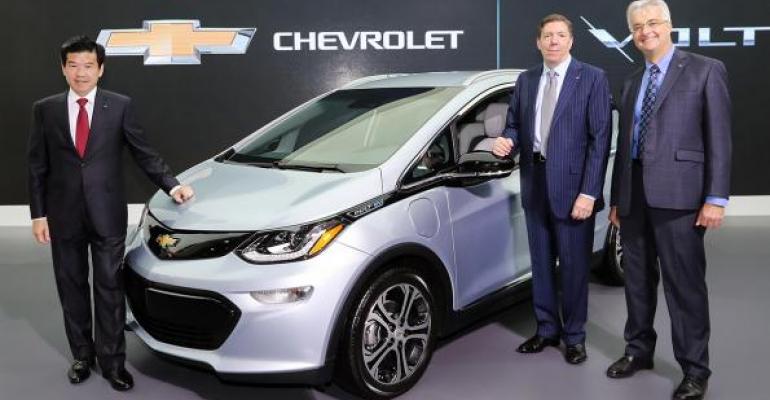 GM Korea President and CEO James Kim says Korean customers had expected the Bolt to be offered locally, although a spokesman for the automaker earlier this week said GM only was &ldquo;studying&rdquo; whether to offer the EV there.&nbsp;

Speaking at the Chevrolet pavilion at the Korea Electronics Show in Seoul, Kim says: “I am so pleased to announce that the game-changing Chevrolet Bolt EV will be launched in Korea in the first half of 2017. The Bolt EV truly embodies the ingenuity that is at the core of everything we do at Chevrolet.”

He says Korean customers had expected the Bolt to be offered in Korea, although a spokesman for the automaker earlier this week said only that GM was “studying” whether to offer the EV there.

Kim notes the Bolt’s range on a single charge is 238 miles (383 km), more than the distance connecting Seoul to Busan on the most heavily trafficked throughway in Korea.

He says local pricing and specification details will be revealed closer to the Bolt’s sales launch.

The Bolt is produced at General Motors’ Orion assembly plant in the U.S. Like the Chevrolet Impala fullsize sedan, it will be imported by GM Korea.

Murray discusses GM’s growing EV portfolio, including the Malibu Hybrid that GM Korea produces at one of its plants in the Incheon suburb of Bupyeong.

He notes 11 major components for the Bolt are supplied by LG Electronics from its Incheon EV components-production center.

Murray says Korea-based LG has grown in a direction that is helpful for GM customers and the two companies have an excellent relationship. He adds GM will increase its partnership with still more companies as automotive electrification expands. While the Bolt is being produced in the U.S. it was nurtured at GM Korea’s design center and vehicle development center, as were the highly successful Cruze compact, Sonic subcompact, and Trax and Captiva CUVs.

GM Korea downplays its role in the engineering and prototyping, but the Bolt was developed at the Bupyeong R&D facility with its own unique platform and was not a derivative of any other small-car offerings.

Design of the Bolt was led by a team under managing director of design Stuart Norris, who joined GM Korea in 2014. Norris earlier was a lead designer for Jaguar.

The GM Korea design studio employs 190 specialists, including designers, and was doubled in size in 2014 with an investment of $40 million, the spokesman notes.

GM Korea has been the global incubator for small cars ever since it was acquired by the parent company from Daewoo. Its vehicle-development center produces complete prototype models that are ready for laboratory and field testing.

However, the vehicle will not be assembled or subassembled by GM Korea.

Confused Koreans Have Their Say on Chevy Bolt, Volt
Aug 23, 2016