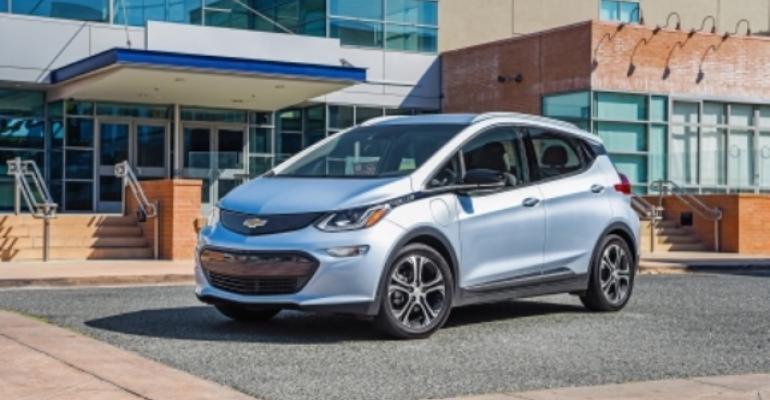 <p><strong>BCG says Bolt&rsquo;s 200-plus mile range between charges still will be good enough to drive the market in 2030.</strong></p>
Vehicles>Powertrain

The consultancy says cost declines will make battery-electric vehicles an attractive purchase for consumers post-2025. Until then, continued government pressure &ndash; and incentives &ndash; will be needed to prop up demand.

TROY, MI – Add The Boston Consulting Group to the list of the converted.

An electric-vehicle skeptic since it first explored the global market potential in 2010, the consultancy says it now believes there is significant growth ahead, predicting an economic tipping point in favor of battery-powered cars will be reached around 2028.

In its new forecast, part of a report to be released later this year, BCG calls for full battery-electric vehicles to account for 6% of the global market in 2025, rising to 14% in 2030.

That penetration level would equate to 6.3 million and 15.3 million units, respectively. This year, BEVs hold a 1% market share worldwide, with about 900,000 units expected to be delivered in calendar 2017.

Sales of xEVs, including 48V mild hybrids, full hybrids and plug-in hybrids, as well as BEVs, will account for 24% of global light-vehicle volume in 2025 and 48% in 2030, up from 5% today, BCG predicts. That should be good for 25 million and 52 million vehicles, respectively.

What’s changed since 2010, when BCG expected BEV sales to top out at around 1.5 million units in 2020? Cost for one, new mobility for another.

In 2010, BCG forecast lithium-ion cell costs would fall from about $670/kWh to $250/kWh in 2020, says Xavier Mosquet, senior partner and lead author of the study. But those costs have declined much more rapidly, by about 20% annually to around $150/kWh today.

That will make BEVs more affordable for consumers, with BCG predicting the 5-year cost of ownership (including purchase price and operating and maintenance costs) for a U.S. buyer will be less for a BEV than for an internal-combustion-engine vehicle by 2028.

In fact, fleets are expected to account for half the BEV purchases in the U.S. in 2030, when sales should equal 20% of the LV market, BCG says. Worldwide, of the 14% BEV market share in 2030, only about four percentage points will be related to shared-mobility fleets.