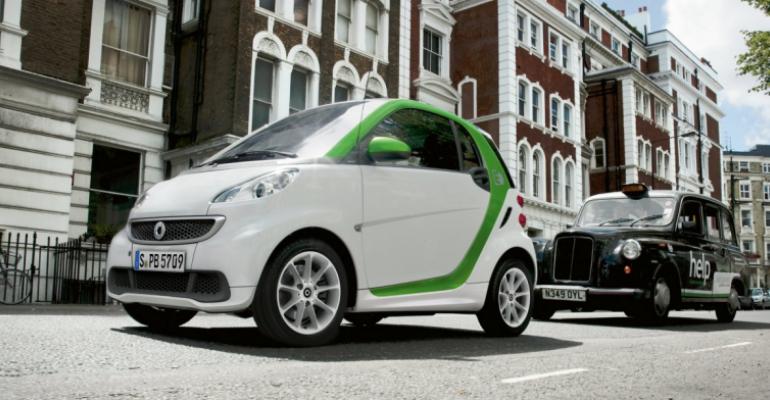 TOKYO – The world’s big automakers and key battery suppliers gather in Tokyo to deliver an upbeat message about the prospects for battery-electric and fuel-cell cars.

In the battery sector, Samsung, which in 2012 acquired full ownership of SB LiMotive, its joint venture with Robert Bosch, projects demand for EV power will grow to 42.2 GW, from 9.5 GW in 2015.

For plug-in hybrids, Samsung expects demand to grow to 17.7 GW from 2.5 GW, while sales of conventional hybrids will increase to 1.7 GW from 100 MW last year.

In a separate presentation, B3 reports Toyota has scaled back its 2020 hybrid sales target from 2 million units to 1.5 million.

Toyota, unlike other leading automakers, uses nickel-metal hydride as the main battery material for its hybrids but has begun installing lithium-ion batteries in various Prius models and expects an eventual 50-50 mix of NiMH and Li-ion batteries across its hybrid fleet.

LG Chem is on track to meet the U.S. Energy Dept.’s 2022 cost targets of $100/kWh for cells and $125/kWh for systems, Kim says. He believes technology and manufacturing improvements will allow the supplier to raise cell energy density to 700 watt-hours in 2022 from 250 at present while reducing the power-to-energy ratio from 14:1 to 7:1.

The B3 consultancy predicts lithium battery demand for automotive applications will grow to 14.0 GW in 2016, up 40.5% from 10 GW in 2015. Reflecting growth trends in EV and plug-in hybrid sales, demand will grow to 50 GW.

Solid-State, Lithium-Sulfur Batteries on Road Ahead

Cosmin Laslau, senior analyst at Boston-based Lux Research, predicts solid-state and lithium-sulfur batteries will achieve 2% and 4% market penetration, respectively, in the transportation sector in 2030, rising to 12% and 8% in 2035.

He estimates sales of lithium-sulfur batteries will reach $6 billion in 2030 and increase to $29 billion in 2035. The growth curve will be more dramatic with solid-state units, rising from $3 billion to $42 billion during the same period.

On the exhibition floor, Nippon Chemi-Con displays its double-layer capacitor technology that has been adopted by Mazda and Honda.

Mazda employs the technology to power accessory systems such as lighting and windows for mainstream models including the Atenza (Mazda6), Axela (Mazda3) and CX-5. It is employed in four Honda models, the Fit, Grace, Shuttle and Vezel.

In the FCV segment, Nomura Research Institute consultant Yukihiro Ogawa estimates cumulative sales will grow to 75,000 units in 2020. Included in the forecast are Honda’s Clarity, Toyota’s Mirai and Hyundai’s ix35.

The Clarity, which boasts a 469-mile (750-km) range, went on sale March 10 in Japan. Honda projects first-year sales of 200 units, all leases. The Clarity goes on sale later this year in the U.S.

The Mirai, on sale since December 2014, is able to cover 406 miles (650 km). Toyota research executive Taiyo Kawai reaffirms the automaker’s plans to boost yearly FCV sales to 30,000 units by 2020 or shortly after.

Hyundai delivered a total of 508 ix35s between its introduction in mid-2014 and February.

Joining Toyota, Honda and Hyundai with FCVs will be Daimler, Ford, Nissan and Renault in 2017, followed by Volkswagen, General Motors and BMW in 2020.

Against this backdrop, fueling infrastructure remains an obstacle to wider usage of FCVs.

Japan has 46 stations in operation with 35 more scheduled to come onstream. Average station cost excluding land is ¥390 million ($3.5 million). A senior official in Japan’s Natural Resources and Energy Agency reports it aims to halve that amount by 2020 to ¥200 million ($1.8 million).

In the U.S. there are 15 public-use stations in operation including 10 in California, four in Hawaii and one in Massachusetts. California is targeting 90 stations by 2020.

In its fiscal 2016 draft budget, Japan’s Ministry of Economy, Trade and Industry has earmarked ¥6.2 billion ($56 million) for hydrogen refueling stations and ¥15 billion ($135 million) for fuel-cell-vehicle subsidies.

The ministry also is budgeting ¥1.6 billion ($14 million) to develop production, transportation and storage technologies for hydrogen from renewable energies.

Nomura Research estimates South Korea will have to deploy 630,000 FCVs and install 500 hydrogen fueling stations by 2030 if it hopes to cut carbon-dioxide emissions 11%.