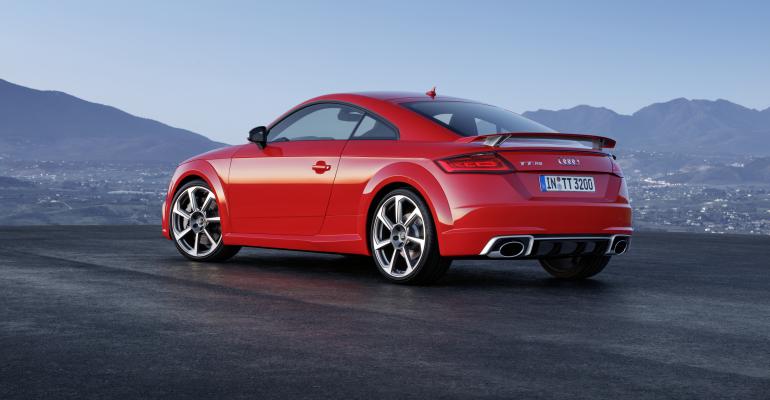 Unveiled in Beijing in both coupe and roadster body styles prior to its U.S. sales launch in 2017, the TT RS is the first recipient of Audi&rsquo;s new turbocharged 2.5L inline 5-cyl. direct-injection gasoline engine.

Unveiled in both coupe and roadster body styles prior to its U.S. sales launch in 2017, the TT RS is the first recipient of Audi’s new turbocharged 2.5L inline 5-cyl. direct-injection gasoline engine, which adopts a transversely mounted aluminum block, among other changes.

Along the flanks are aluminum-look mirror housings and wider sills beneath the doors. The rear is distinguished by a fixed spoiler atop the trunklid, although buyers can opt for a more subtle extendable spoiler. The rear bumper gets a new lower section with an integrated diffuser and two large oval tailpipes.

In an industry first, buyers can opt for Audi’s new organic LED taillamps, each consisting of four elements, the largest of which features the TT logo and Audi’s 4-ring emblem.

The 2.5L turbo, development of which kicked off under the direction of Audi R&D boss Ulrich Hackenberg prior to his retirement in late 2015, follows the lead of the automaker’s 4-cyl. engines with an aluminum block that, combined with other changes centered on the induction system, weighs 57 lbs. (26 kg) less than the iron block unit it replaces.

At 2.5L, the TT RS’s overall swept volume is unchanged, although the adoption of Audi’s patented valve-lift system and a dual-injection system that injects fuel into both the inlet manifold and the combustion chamber is claimed to significantly improve overall efficiency.

Specs Up Across Board

In its initial state of tune, with its turbocharger running maximum boost pressure of 20 psi, the new 5-cyl.’s 395 hp yields a specific output of 159 hp/L. By comparison, the iron-block engine in the final incarnation of the first-generation TT RS delivered 40 hp less at 355 hp, or 143 hp/L.

The new TT RS rides on a chassis lowered by 0.4 ins. (10.2 mm) over the standard TT. Further changes include the adoption of stiffer springs and dampers and a set of standard 19-in. alloy wheels. Options include Audi’s magnetic ride system, which provides variable damping qualities, and 20-in. wheels.