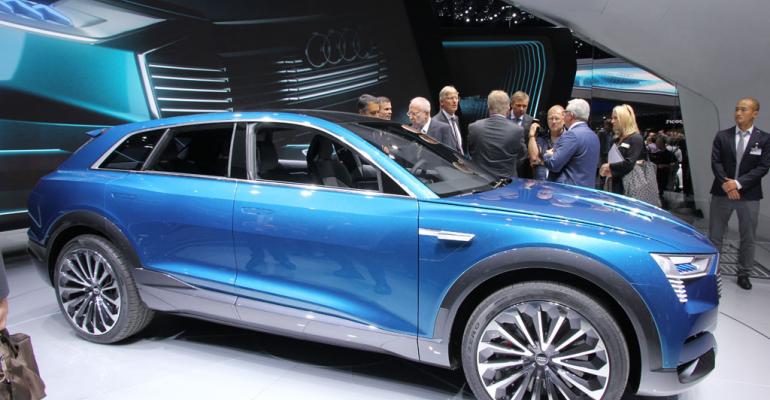 The e-tron name will be carried without any specific model designation, a move evoking the naming of Audi&rsquo;s original quattro launched back in 1980.

The e-tron name will be carried without any specific model designation, a move evoking the naming of Audi’s original quattro launched back in 1980.

First shown as the e-tron quattro concept at the 2015 Frankfurt auto show, the battery-propelled SUV is among three all-electric models planned by Audi through 2020. The outlook also includes a smaller hatchback and large sedan.

“It is comparable to the first Audi quattro, which was known simply as the quattro,” Stadler, chairman of the Volkswagen Group luxury unit, says of the naming strategy. “In the long term the name e-tron will stand for a pure electric driveline structure.”

As with the quattro name, Stadler confirms, the e-tron name subsequently will appear on Audi’s other new EV offerings in combination with more traditional model nomenclatures.

Stadler also provides the first official hint that Audi is working on an up-market electric-powered sedan to challenge the Tesla Model S.

“I do believe that it makes sense for the Audi brand to be positioned in the top premium segment with this driveline technology,” he tells journalists here.

However, Stadler quashes suggestions the EV sedan model may replace the company’s long-planned A9. Instead, it is expected to form part of the three initial EVs already under development at Audi’s Ingolstadt headquarters, possibly taking the name A8 e-tron.

Asked whether the third Audi electric car due out before the end of 2020 could be a compact MPV-style offering in the mold of the aborted successor to the original A2, Stadler reveals his enthusiasm for an SUV with what he describes as a “space concept vehicle” twist.

“We are presently experiencing an upward swing in the demand for such electric concepts, primarily in large megacities,” he says. “They would be well suited with ranges of between 350 to 450 km (218-280 miles). The subject of space is an important one. That means we’ll see compact electric cars, but with vastly improved interior design. Customers want ease of entry, a command seating position and the feeling of safety.”

Such a model could come off the MEB platform structure unveiled by VW as the I.D. concept at the recent Paris auto show.

“We will engage with this intelligent concept in the middle term,” he says.

Despite Audi’s long-held tradition of front- and all-wheel-drive models, Stadler does not see a rear-wheel-drive concept of the I.D. hindering development of future EVs for the company.

Stadler’s remarks come alongside reports Audi will scale back spending on conventional powertrain technology to focus on EVs and autonomous-driving technology.