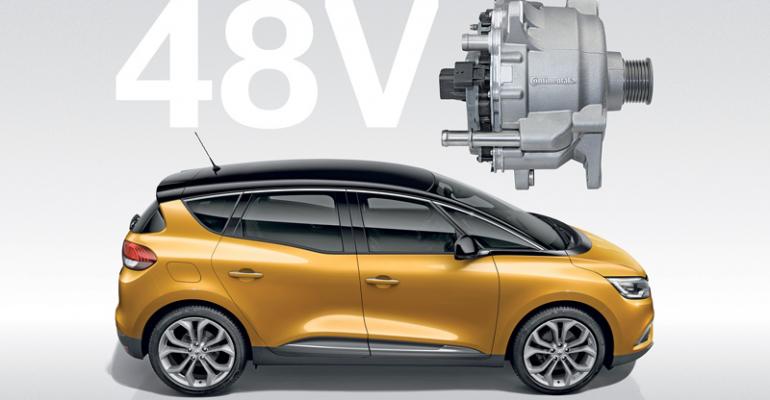 48V Hybrid Application First of Many for Continental, Execs Say

The German supplier says 48V electrical architectures, which increase the onboard energy available to enhance powertrain performance or power the rapidly expanding list of comfort and convenience features, should be in place on 25 million new vehicles produced annually worldwide by 2030.

TROY, MI – Continental has put its first 48V mild-hybrid system on the road in the Renault Scenic minivan for Europe and predicts the nascent technology will see a surge in applications between now and 2022, before becoming prevalent over the course of the next decade.

The German supplier says 48V electrical architectures, which increase the onboard energy available to enhance powertrain performance or power the rapidly expanding list of comfort and convenience features, should be in place on 25 million new vehicles produced annually worldwide by 2030.

“There are challenges (to electrification), but also a lot of opportunities for Conti and also for the automotive industry,” Rudolf Stark, executive vice president-hybrid electric vehicles, notes here at a backgrounder on Continental’s 48V technology. “I see a real change coming.”

The Scenic application uses what Continental calls Eco Drive, a stop/start system that operates on a 48V circuit instead of the vehicle’s main 12V electrical bus and is powered by a lithium-ion battery with capacity of about 0.5 kWh.

Offered as standard with both diesel and gasoline powertrains in the Scenic Hybrid Assist model, the system combines a water-cooled induction motor and an integrated inverter, with electric power delivered directly to the engine crankshaft via belt drive.

Although the system does not provide launch assist, the electric power can drive the wheels in small spurts to maintain speed in highway cruising when in sailing mode, a stage in which the internal-combustion engine shuts down and de-couples from the driveline. The vehicle also can move solely under electric power at low speeds, such as during parking-lot maneuvers.

The engine restart is much quicker – taking just milliseconds – and smoother with the 48V system, boosting fuel economy, Stark says. “You can switch it on and off more often, because it’s not so annoying.”

Continental says the mild-hybrid system can increase real-world fuel economy 20% and cut diesel nitrogen-oxide emissions up to 10% during acceleration.

Executives here don’t argue with widely quoted cost estimates of $900-$1,500 for a 48V hybrid system, a premium that is at or below that of a diesel engine and much less than the cost of full hybridization. Costs will drop with second-generation systems, then take a much bigger step down once market penetration reaches 30%-40% worldwide, the supplier says.

“This is a cheap way to meet the new (global fuel-economy and emissions) requirements,” Stark says. “We think this is a real future technology (and) a bridge technology to full electrification.”

The Scenic is just the first in what is expected to be many applications on the way for Continental.

“It is gaining momentum in the market,” Stark says. “In Europe, a lot of OEMs are working in this direction – and they will bring (the technology) over here to the U.S. sooner (rather) than later.”

Juergen Wiesenberger, director-hybrid and electric vehicles, says Continental already is ramping up for a 48V application by a U.S. automaker in calendar 2018 but doesn’t disclose specifics.

The Renault application is not the first with a dual-voltage 48/12V system. Volkswagen Group’s Bentley uses a 48V circuit for the active suspension on its Bentayga CUV, and sister brand Audi is rolling out its SQ7 with an electrically driven supercharger, powered by a separate 48V system. Both use technology from French supplier Valeo.

But there are many more applications on the way. Volkswagen insiders say a 48V hybrid system will be offered on at least one model next year. In its 5-year outlook presented in May 2014, Fiat Chrysler Automobiles signaled it would have “broad market penetration” of 48V mild-hybrid technology beginning in 2016, though it has not launched any vehicles with such systems to date. Mercedes has acknowledged its new family of 4- and 6-cyl. engines on the way also were designed around 48V electrical architectures.

Continental forecasts penetration will reach 4 million vehicles per year globally in 2020, and by 2025 it expects 20% of new vehicles to feature 48V technology.

“It’s not a niche application,” Stark says. “We see a big market here, and we see a lot of OEMs working in that direction.”

In addition to the system in place on the Scenic, Continental has a more advanced unit, developed with partner Schaeffler, that is packaged inline between the engine and transmission and uses electrical power to launch the vehicle to speeds up to 10 mph (30 km/h).

The second-gen system is expected to be ready in 2020 and adds capability for electrical launch-assist and electric drive at speeds up to 31 mph (50 km/h).

A third-gen system will integrate the electric motor directly into the driveline, eliminating the need for a drive belt, further improving efficiency.

Continental doesn’t believe any rollback in U.S. CAFE requirements – a possibility under the impending Trump Admin. – will put the brakes on the 48V movement.

“People also are looking at de-contenting expensive combustion as opposed to going full turbocharged, direct injection, gasoline particulate filter,” he adds. “(You can) take some of that technology out and go to electrification with 48V.

In addition, there is future application potential that extends beyond hybrid systems, turbochargers and suspensions, officials say, citing air conditioning, steering, preheated catalysts, heated windshields and comfort features among systems that could benefit from switching to a 48V electrical circuit.

“There are a lot of things you can do,” Stark says. “And each OEM is considering at the moment what is the best package. Once you are in with 48V, you can think about all these things step-by-step to change to a higher voltage level.”

Longer term, Wiesenberger says, “automated driving will introduce many, many more actuators and sensors, so the need for electrical power is increasing quite steadily, and the 12V system is in many areas close to its limit.”