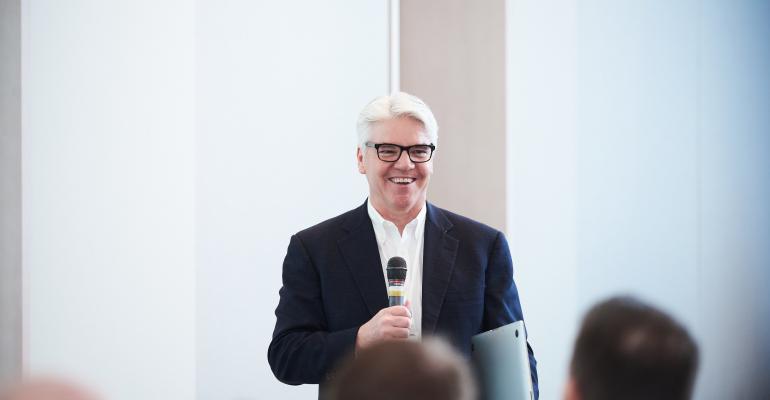 <p><strong>&ldquo;Sadly, some people working in a rigid scripted environment lack empathy and the desire to truly help the customer,&rdquo; Kain says.</strong></p>
Dealers>Digital Marketing

Warning to Dealership Salespeople: If You Act Like a Robot, One Could Replace You

In a WardsAuto Q&amp;A, automotive digital guru David Kain talks about his days as the first employee of FordDirect and the need today for empathic salespeople. &nbsp;&nbsp;&nbsp;

Nearly 20 years ago, the Ford National Dealer Council prodded Ford into a partnership that created FordDirect.

Before the creation of FordDirect, David Kain worked at a family dealership his father founded, the namesake Jack Kain Ford in Versailles, KY, near Lexington.

After Ford gave FordDirect the green light, David Kain relocated to Michigan to head up the innovative initiative. He now is president of KainAutomotive, an Internet sales/business development center training and digital marketing consultancy. He retains an interest in the family business.

He is considered an automotive digital expert and thought leader. In a WardsAuto Q&A, he talks about the early FordDirect days, how to foster a great online customer experience and the need for empathy in car salespeople. Here’s an edited version of the interview:

WardsAuto: Obviously there are different skill levels, but generally how are dealers doing digitally these days?

Kain: Some broad-scale growth has occurred. Dealers begrudgingly may not want to give OEMs credit, but they’ve done a good job of mandating movement towards digital.

Progressive dealers that get it have always been on the forefront, trying to adapt and innovate. Those guys on their own didn’t have the power to inspire the others, but they spurred OEMs to get the other dealers involved.

So, it started with some dealers doing a great job, OEMs recognizing the opportunity and consumer research supporting that. A good 75% to 80% of dealers are participating in quality-level digital these days.

WardsAuto: That’s an interesting timeline; that it started with dealers, and OEMs picked up on it.

Kain:  When the Ford National Dealers Council created the idea for Ford Direct, we took it to Ford in 1999. At the time, they were dabbling with retail, but they were doing it a Tesla way, in that it circumvented dealers.

When we presented our model, they said, “That sounds better than what we’re doing.”  But we still couldn’t get them to move. So our committee talked to Bert Boeckmann, Sam Pack and other leading Ford dealers to get them on top of it and urge them to talk to (Ford vice presidents) Jim O’Connor and Bob Rewey. Sure enough, they called on our behalf and we got it done.

WardsAuto: Did the dealer council propose a company called FordDirect, or did Ford take the model and name it that?

Kain: Ironically, Leo Hillock, one of the members of our Internet information and technology committee, had bought the URL domain name FordDirect.com. He had a fledgling website. He came to our committee and said, “This is a good idea, what do you think?” I thought it was a fabulous idea. Ultimately, so did Ford; it was resistive at first. I left our family dealership and became the startup CEO – and first employee – at FordDirect.

WardsAuto: That was pretty progressive for back then.

Kain:  It’s funny, because a week before we were going to announce FordDirect, General Motors popped up and said, “Oh, we’re going to do online retailing.” We’re like, “What!?” But they didn’t have any real model. It was factory-driven. Ours was factory-dealers jointly. (Since then, GM has developed “Shop, Click, Drive,” a robust online car-shopping system that operates through dealers.)

WardsAuto: You advocate the need for empathy in both in-person and online auto retailing. Talk about that.

Kain:  I say this all the time to the teams we train: “If you are going to behave like a robot and send template emails and have scripted-sounding conversations with no emotion, you can be replaced with artificial intelligence.”

Just about every day, I look at communications from professionals using a template (to respond to a customer’s online inquiry), and in parenthesis in red ink the manager has typed “Insert answer.” That’s inadvertently left in. The customer sees it. I don’t call that human connecting.

WardsAuto: Customer experience has become an auto-retailing buzzword. How does a dealer deliver that online? Usually you think of CX as occurring at the dealership.

Kain:  Michael Schumacher of Schumacher European (a Mercedes-Benz dealership in Phoenix) would appear on screen and greet customers on his website. I was enthralled by that. We’ve tried to remove the human element from our websites and diminished the benefit of a business owner. That’s hurt us.

We’ve created live chat to generate leads. Live chat should be more about chatting and building friendships and relationships. But we’ve become very reactive instead of proactive in today’s environment. Tomorrow’s retailer should more proactively engage with consumers when they come on the digital lot, rather than expect them to fill out forms or chat with someone who just wants to get their lead.

A lot of customers go on a physical car lot and just like to chat with someone from the dealership. At my family dealership, I’d walk up to people and just say “Hi” and exchange a few pleasantries on my lunch break. I didn’t try to close them right there. They’d come back a week or so later and say, “You were so nice, I want to buy a car from you.” We’ve got to become more engaging and less closing, but close when the time is right.

WardsAuto: How does someone learn that?

Kain:  By orienting our sales team – and really our overall dealership team – to better understand nuances and by bringing some psychology into it.

Neil Rackham wrote a great book, “Spin Selling.” He says the archaic model of closing and overcoming objections demoralizes consumers and salespeople. We should work more to remove obstacles and make it easier for them to say, “Yes.” Digital tools can help there.

WardsAuto: What’s an example of that?

Kain:  I’ll tell you something freaky. My friend Chip King owns a company called Call Revu. They are at a point where the color shade on the screen changes during a live phone call. The machine-learning (software) can tell if the customer is rejecting what the salesperson is saying, and color changes indicate that.

WardsAuto: How does the system know the customer is rejecting something?

Kain: By tone of voice, (key) words. Sadly, some people working in a rigid scripted environment lack empathy and the desire to truly help the customer.

We often train people to just soldier through. If a customer on the other end of the line says, “I’ve got to go, my kid’s crying,” a lot of us say, “When would be a good time to call back?” instead of, “I sure hope your child is all right.”

We lack empathy because we train it out, and it’s hurting us. It’s not trained out of the best salespeople. They keep it. Mix that in with digital retailing, and you can make hay.

WardsAuto: You talk to lots of dealers. What’s on their minds?