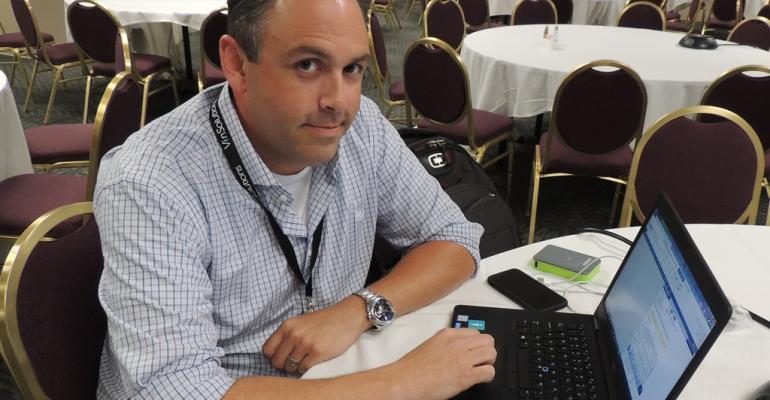 Son of a Superstar Car Salesman Talks About Lessons Learned

In a WardsAuto Q&amp;A, VinSolutions&rsquo; Mo Zahabi talks about the challenges of getting dealership personnel to use CRM, the benefits such systems afford, his shyness and his immigrant dad.

KANSAS CITY, MO – Mo Zahabi is focused on his job. He tries to emulate the work ethic of his immigrant father, a dealership superstar who did a lot of deals when he wasn’t napping in a back room now and then.

“He sold 25 to 30 cars a month,” Zahabi says of his father who recently retired. “At age 70, he was running circles around the other guys. We called him the Energizer Bunny.”

The younger Zahabi began his career as a dealership salesman, then held various managerial posts, most of them centered on digital initiatives, such as Internet manager and e-commerce director.

In a WardsAuto Q&A, Zahabi talks about the challenges of getting dealership personnel to use CRM, the benefits such systems afford, his ability to overcome his shyness and lessons learned from his immigrant father.

Here’s an edited version of the interview that took place during VinSolutions’ VinWorx User Summit here.

WardsAuto: Why do some dealerships buy CRM systems and then don’t use them?

But a good CRM system is easy to use, transparent and protects data. Those are the big three.

WardsAuto: There are instances in which customers do a lot of work online, there’s a tracked record of that activity, yet when they get to the dealership, it’s like, “Who are you?” How does that happen?

Zahabi: I bought a car a couple of months ago. I called the dealership. I told them please don’t mess with me because I had sold cars for a living. I told them if I liked the car, I’d buy it.

Yet, it took three hours. They gave me a green pea salesperson who kept getting up and leaving. That’s a big problem.

If dealers would learn better to embrace the right technology, it would change the game. That includes having a way to connect the online experience with the dealership experience.

Zahabi: He has two engineering degrees and an MBA, and he sold cars for more than 30 years. He was one of the best car guys I’ve ever seen.

WardsAuto: He was a salesman?

Zahabi: Yes. He never wanted to be a manager or anything else. Just sell cars and do his thing. He was working at Northtowne Auto Group here in Kansas City. They had a cot in the backroom for him to take naps when he wanted to.

WardsAuto: Where’s your dad from?

Zahabi:  Iran. It’s funny because I have a Persian father and an Irish-Catholic mother. I was the only kid in Catholic school named Mohammad Jonathan. The only person who calls me Mohammad today is my dad.

WardsAuto: What was his trick to selling all those cars?

Zahabi: He’s very personable, just one of those people you want to talk to. My friends call him “Pops.” They hang out with him. He’s like that with everyone. He’s charismatic, outgoing and wicked smart. That’s a good combination.

And he doesn’t get discouraged. He doesn’t give up. Some car guys give up too easily. Some guys in the dealership would say, “I sold my car for the day” and then sit down for the rest of the day. My dad taught me to get back at it and sell a second car. That’s his ethic.

WardsAuto: When it comes to CRM, there’s talk in the industry about the fine line between personalization showing you know customers and they’re impressed, opposed to showing them you know so much and they start thinking, “This is weird.” Where is that line?

Zahabi: There are two ways of looking at that. We have social-media networks integrated into our system. If a dealership salesman calls a customer and says, “Hey, I’m on Facebook looking at a picture of your hot wife,” that’s creepy.

But you can use acquired information to tailor your presentation. If I saw on a Facebook page profile someone had two kids, I’m going to pitch safety the whole time I talk to them at the dealership. I’m going to mention I have kids and encourage them to talk about theirs.

WardsAuto: You spent more time than you wanted buying a car. How important is it for dealerships to get customers in and out expeditiously?

Zahabi: It’s about customer experience. It drives everything. It affects sales, profitability and individual pay plans.

Technology like driver’s license scanners captures bar-code information on the backs of the licenses. It helps the dealership get information immediately and keep things moving.

Average time in the dealership today is 3.5 hours. Average accepted time is 90 minutes. If you can streamline it with technology and not duplicate things, you solve the big time problem. Some people want to stay at the dealership all day long. Most don’t.

WardsAuto: Alan Starling, a dealer in Florida, has a lot of elderly customers. He says they like to come in and take their time. They are in no hurry to leave.

WardsAuto:  Do they usually buy in the end?

Zahabi: They do. But here’s the thing. Statistically, if people show up at your dealership today, they are going to buy. If they’re there and they don’t buy, it’s your fault. You goofed up somehow.

Most dealers realize if they show up, they deserve an experience. Make them happy. Ask what they want. They’ll tell you.

WardsAuto:  So if you were to list positive customer-experience factors, one would be time. What would the others be?

Zahabi: Transparency. Showing them what’s going on. Honesty, obviously. Selection plays a part. For customers who leave, follow-up plays a part in satisfaction. It’s surprising how many dealerships drop that ball.

WardsAuto: Fran O’Hagan of Pied Piper management consultancy says salespeople who follow an established process succeed whether they are extroverts or introverts. Yet many people presume introverts would be horrible in sales.

WardsAuto: You wouldn’t know it talking with you.

Zahabi: Because this is my comfortable zone. But introverted people, if they can control that certain area, their safe place, they excel. They really do.