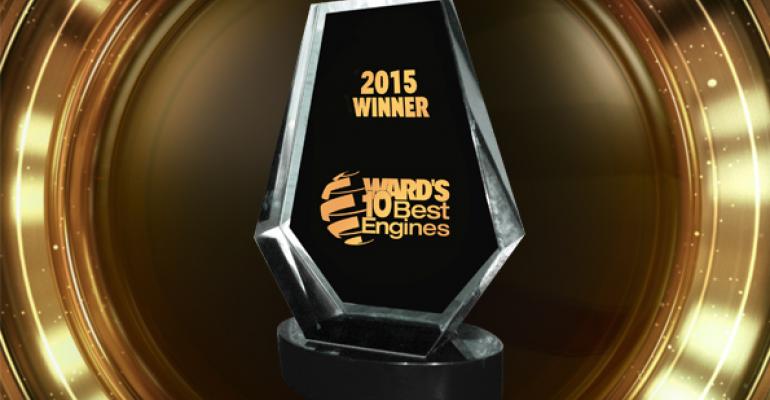 From a 707-hp fire-breathing V-8 to a hydrogen-powered fuel cell emitting nothing but water vapor, the 2015 Ward’s 10 Best Engines list is by far the most diverse and technically advanced pool of honorees in 21 years of recognizing powertrain excellence.

WardsAuto editors spent October and November evaluating 36 all-new or improved powertrains, including four battery-electrics before settling on the winners. In alphabetical order, they are:

The Ward’s 10 Best Engines competition pits the latest engines available in the U.S. market against the returning winners from the previous year. Four engines that won last year return for 2015: the Chevrolet V-8, Ford 3-cyl., Ram diesel and VW 4-cyl. All entries fall under a base vehicle price cap of $60,000.

“We spend a lot of time reading the powertrain tea leaves throughout the auto industry, and we’re proud that this year’s list is a microcosm of all the latest innovation coming from automakers,” says WardsAuto World Editor-in-Chief Drew Winter.

“It’s not just a list for enthusiasts or for environmentalists,” he says. “There’s something for every vehicle shopper and every budget. All the powertrains on this list deliver a first-rate driving experience.”

BMW seeks to redefine the concept of mobility and generally succeeds with the i3, a battery-electric compact car that employs a carbon-fiber-reinforced plastic passenger cell, thermoplastic body panels and lots of recycled materials to deliver a curb weight hundreds of pounds lighter than every other 4-passenger EV on the market.

The lightweight chassis sets the stage for a sprightly electric motor that generates 170 hp and 184 lb.-ft. (249 Nm) of torque in a broad powerband that is uncommon among EVs, enabling the i3 to reach 60 mph (97 km/h) in 7 seconds.

Truly setting the i3 apart from other EVs is the optional 0.7L gasoline-fueled generator that roughly doubles range to 150 miles (241 km) and mitigates the fear of being stranded when the electricity runs out.

General Motors returns to the list with its 6.2L LT1 V-8 that is the heart and soul of the seventh-generation Chevrolet Corvette. The all-new small-block engine family arrived last year, re-engineered from head to torque converter, and the LT1 is the crown jewel of this massive engine family.

Drive the Corvette hard, as it’s intended, and the V-8 barks with authority, delivering an exhaust note reminiscent of Detroit’s finest muscle cars, thanks to a performance exhaust system that boosts output to an attention-grabbing 460 hp.

The 7-speed manual transmission makes the ’Vette a riot to drive, but the new 8-speed automatic is stealthy and crisp and worth the $1,725 option price. WardsAuto editors flogging the coupe for more than 300 miles (483 km) managed better than 20 mpg (11.7 L/100 km) with the 8-speed auto.

From one outrageously capable push-rodder to another, the Dodge Challenger SRT Hellcat terrorizes concrete with a 6.2L V-8 that draws inspiration from a massive supercharger that lets this significantly re-engineered Hemi howl under a heavy boot and deliver terrifyingly fast runs to the redline.

It takes dazzling technology to corral 707 ponies, such as diamond-coated washers, reinforced bulkheads and crankshaft and extra-strong alloy pistons. Yes, it’s one of the few Ward’s 10 Best Engines winners to shoulder a gas-guzzler tax, largely because the Hellcat can be downright docile for easy daily driving.

Plus, it’s reasonably fuel-efficient, thanks to a 2-stage fuel pump and an engine controller programmed to upshift the 8-speed automatic as soon as possible. Every editor got at least 15 miles per gallon (15.6 L/100 km).

At the other end of the spectrum, Ford’s 1.0L EcoBoost 3-cyl. powering the Fiesta B-car once again earns a slot among Ward’s 10 Best Engines. This mighty mite produces 123 hp and 125 lb.-ft. (169 Nm) of torque, providing brisk acceleration and plenty of power at highway speed.

Ford mitigated the NVH challenges posed by 3-cyl. engines with some ingenious engineering that eliminates the need for balancing shafts.

Perhaps the 1.0L’s best attribute is its stellar fuel economy. Even during aggressive driving, one WardsAuto judge achieved 38.9 mpg (6.0 L/100 km), an impressive feat for any non-hybrid.

Fuel-efficient, lightweight and fun to drive with a 5-speed manual gearbox, the 1.0L EcoBoost is proof that good things truly do come in small packages.

After 21 years, the Ward’s 10 Best Engines list has its first fuel-cell vehicle, the Tucson CUV, courtesy of Hyundai, which can claim leadership in the hydrogen-fueled zero-emissions world.

Serious consideration was given to the meager infrastructure for hydrogen refueling and the vehicle’s availability in California only. But Hyundai engineers have done a stunning job packaging a fuel-cell stack under the hood to convert hydrogen into electricity to turn the wheels with ease.

The 5-passenger Tucson FCV is powerful, quiet and, in a good way, completely ordinary. Pop the hood, and the fuel-cell stack even looks like a combustion engine. It’s as if this CUV was delivered from another galaxy by ingenious extraterrestrials who know how to make an Earthling feel right at home behind the wheel.

As emissions and fuel-economy regulations ramp up, every automaker likely will develop fuel-cell vehicles. Hyundai is ahead of the curve.

Mini has won two Ward’s 10 Best Engines trophies over the past 21 years for boosted high-output 4-cyl. engines, but this year the brand returns with an authoritative interpretation of the 3-cyl., another powertrain destined to achieve high volumes in the U.S. as efficiency demands rise.

Mini’s 1.5L churns out 134 hp and makes the all-new Cooper highly entertaining, while enabling every WardsAuto editor to achieve at least 30 mpg (7.8 L/100 km) in spirited driving. One editor said he couldn’t imagine buying a Mini with any other engine.

There was a time when people bought underpowered 3-cyl. engines out of economic necessity. Mini turns that legacy on its ear by demonstrating a base engine can totally sell a vehicle. With a starting price under $20,000, the Mini 3-cyl. is the smart choice.

WardsAuto editors evaluated five diesels this year, all of them good. But standing slightly taller than the others, literally, is the 3.0L V-6 in the Ram 1500 fullsize pickup.

Some 20% of Ram buyers are opting for this compact stump-puller and clearly have justified the $4,000 premium over the base V-6. Why? Because the 3.0L diesel that was engineered in Italy by Fiat-owned VM Motori quells the clatter long associated with oil-burners, making it smooth and highly competitive with diesels in German luxury vehicles.

But the primary reason to pick the Ram 1500 EcoDiesel is fuel economy. We found this engine capable of 24 mpg (9.8 L/100 km) in mixed daily driving, which is remarkable in a fullsize pickup. We’re certain a long haul on the highway, depending on payload, could match the 28 mpg (8.4 L/100 km) highway rating on the sticker.

Subaru delivers a new rally-car hotshot, the compact WRX sedan, and the 2.0L turbocharged 4-cyl. boxer under the hood makes it, as one editor says, the best yet.

WardsAuto tested this engine last year in the Forester CUV, but it returns in the WRX with an extra 18 hp and a torque peak that arrives as early as 2,000 rpm and extends the powerband. Plus, the WRX version needs only 15.9 psi (1 bar) of boost pressure (compared with 17.1 psi [1.1 bar] in the Forester), which translates into better fuel economy. Some editors achieved an outstanding 28 mpg (8.4 L/100 km).

With valve springs re-engineered for higher revving, as well as new camshafts, rocker arms and electronic controller, the WRX engine pairs up perfectly with a 6-speed manual that makes rowing through gears a thrill. This fleet-footed boxer steps into the ring with fire in its eyes.

Volkswagen continues to demonstrate its expertise with compact, highly potent 4-cyl. engines with forced induction. This year, we tested three more new turbo-4s from VW, four if you include Audi.

But the engine that stands out, just as it did when it earned a trophy last year, is the 1.8L in the new Golf. This sophisticated fuel-sipper comes from the EA888 modular engine family that has spawned several fine engines over the years.

WardsAuto tested a record 15 turbocharged 4-cyl. engines this year, making the competition fierce in this powertrain segment. One that clearly shines is the 2.0L Drive-E T5 in the Volvo S60 sedan.

This silky Swedish gem does everything well: It has a broad powerband, is smooth enough for a luxury application and can deliver 32 mpg (7.3 L/100 km). Despite the glut of good turbo-4s, very few engines achieve all three of those objectives. Rated at 240 hp, Volvo’s T5 likes being driven hard.

There’s another new Volvo 2.0L 4-cyl. that did well in our testing, the T6, which uniquely combines both turbocharging and supercharging to produce 302 hp. But we preferred the simpler high-efficiency package of the T5. With engines like this, Volvo has the potential to expand beyond its “near-luxury” reputation.

How We Pick Them

To be eligible for the Ward’s 10 Best Engines competition, an engine or propulsion system must be all-new or significantly re-engineered and available in the U.S. market with a base price not exceeding $60,000.

This year’s pool of 36 nominees includes last year’s 10 winners and 27 new entries. Eight WardsAuto editors drove the vehicles in October and November in their routine daily commutes around metro Detroit.

Engines we hope to test in next year’s evaluation include the Ford Shelby GT350 V-8, Jaguar 2.0L diesel 4-cyl., the new Chevrolet Volt, CNG Chevrolet Impala and 2.8L 4-cyl. diesel in General Motors’ new midsize pickups. The Chevrolet Corvette Z06 exceeds the price cap and will not be included.

Please visit WardsAuto.com in the coming weeks, as well as the January issue of WardsAuto World digital magazine, for additional commentary, profiles of the winning engines, videos and more information about the 2015 Ward’s 10 Best Engines.