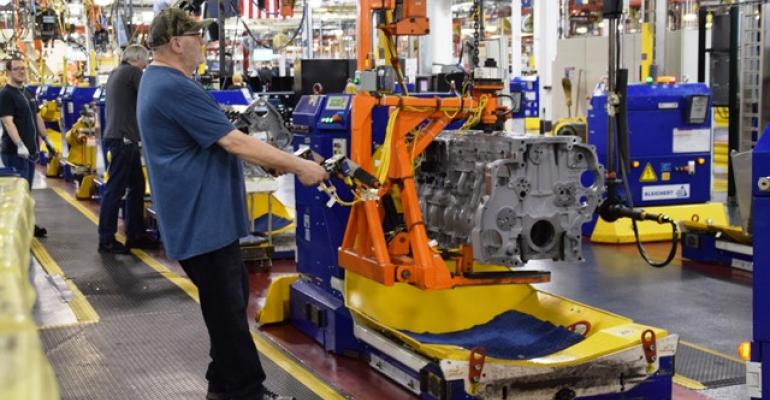 The 80-year-old plant&rsquo;s owner, Daimler, has boosted efficiency and productivity while growing the product portfolio to include new engines, transmissions and turbochargers, with new medium-duty engine production starting later this year.&nbsp;

REDFORD TOWNSHIP, MI –  Construction began 80 years ago, when General Motors created the Detroit Diesel Div. and wanted to compete in the commercial-truck sector. During World War II, this sprawling plant manufactured armaments, like so many others in the “Arsenal of Democracy.”

The factory fell on hard times and in 1987 businessman Roger Penske swooped in and purchased it for a paltry $50 million, then began investing in upgrades to accommodate new products before turning around and selling the plant in 2000 for about $500 million to the former DaimlerChrysler.

At the time, “the plant didn’t look so good,” recalls Jon Townsend, plant project manager. “It was like a classic car you’d find behind someone’s barn that’s got a couple shotgun holes in it, a lot of rust, some little furry creatures living in the upholstery. It was a mess out there.”

But in 2005, two years before it sold off control of the Chrysler Group to Cerberus, Daimler began aggressive investments (the first totaling $275 million) to streamline efficiency, grow the product lineup, boost morale and improve productivity and quality.

The success of these engines has given Detroit Diesel about a third of the North American heavy-duty truck engine market, Townsend says during a tour of the plant on the eve of the Manufacturing in America 2017 conference held this week in Detroit.

Detroit Diesel supplies Freightliner – also owned by Daimler and by far the No.1 brand in the U.S. – with 90% of its engines.

“Would we have the engine market share we have with HDEP if they were not produced in the United States of America? No, we wouldn’t,” he says.

But success was not immediate, as it took a few years to gear the plant and its workforce for adoption of the Toyota Production System.

“We didn’t run that line efficiently until 2011, in my opinion,” Townsend says. “Now we run it like world-class efficient. In the last five years, we’ve had a heavy focus on lean manufacturing, lean processes, lean methodology. We’ve had a very big focus on hours per unit as a steering mechanism of the plant.”

He declines to say how many hours it takes to assemble a heavy-duty engine, except that it’s improved 42% from 2010 to 2015.

The success of the HDEP program led to Detroit Diesel securing a new cylinder-head machining line in 2012 – about the time President Obama visited the plant – followed by production of turbochargers in 2014, DT12 transmissions in 2015 and final-drive gearsets in 2016.

The business keeps growing. The plant also produces heavy-duty axles (tandem, rear and front), and construction is under way on a new assembly line to manufacture medium-duty 4-cyl. DD5 and 6-cyl. DD8 engines beginning this December. The plan is to produce 54,000 of these engines annually with two shifts and 53 employees per shift, at a cycle time of 3.4 minutes.

Total headcount is 2,225 people, including 1,151 hourly members of the UAW and 1,074 salaried employees, including 300 assigned to the plant. The campus also serves as the North American headquarters for Mercedes-Benz Research and Development.

Townsend says Daimler could have sourced many of the newer products from its plants in Brazil, China, Japan, Germany or Mexico, “but it was a global Daimler decision to put it here, also knowing it would take a world engine to meet changing emissions regulations.”

That means integrating advanced technology such as cooled exhaust-gas recirculation and urea-based selective catalytic reduction to meet U.S. diesel standards, which are stricter than those overseas.

“We are a very regulation-driven industry, and that’s been the main cost driver in our products over the last several years,” Townsend says. “But we can say with a lot of certainty that (heavy-duty diesel engines) are cleaner now than they’ve ever been.”

Along the way, the plant has sent zero waste to landfills since 2015, and cleaner manufacturing technologies have virtually eliminated the smell of smoke and machine oil.

Several initiatives have boosted employee morale, including increased vacation time, low-cost lease availability for Mercedes C-Class cars and a fitness club that costs only $5 a month. Plus, employees can bring their families to see an on-site doctor with no co-pay, and prescription drugs are free.

Thinking back on its shabby condition years ago, Townsend says the plant is more productive than ever.

“It’s like we took that car from behind the barn and sent it to Gas Monkey Garage or one of those places and we fixed it all up,” he says. “It’s old but it’s fast, and it’s got the newest technology.”