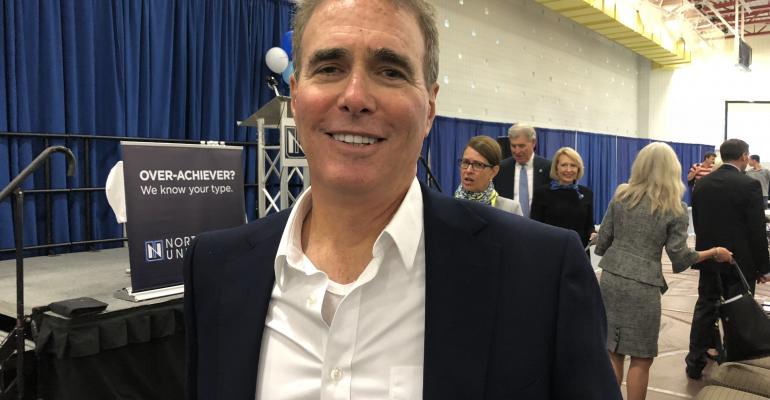 Pollak at Northwood University. He recalls being thrown out of some dealer offices when he was first preaching his new way to sell cars.
Dealers

The auto industry icon says at Northwood University’s convocation ceremony, “Happiness is elusive. It’s not like there’s a happy button to push.”

“You cannot and should not pursue happiness as a life goal, even though many people have been told to do that,” he says in a speech to a student assemblage. “Happiness is elusive. It finds you. It’s not something to pursue. It’s not like there’s a happy button to push.”

For sure, Pollak, who is blind but didn’t let that stop him from becoming a software developer among other things, isn’t urging young people to become dour worrywarts. But he warns against constantly seeking bliss fixes.

“Life has its ups and downs,” he says. “One day you can be happy, the next day profoundly sad.”

To achieve if not constant happiness, then at least spells of it, he tells the students to pursue purposefulness, and act on that. “When I do meaningful things, I feel good. That’s a foundation to happiness. Discover what means the most to you. That’s what your academic career should be all about.”

Pollak is a former car dealer who went on to become the founder of vAuto, now a Cox Automotive brand. It provides dealership inventory-management software that uses market-demand information to help dealers stock and price vehicles. It relies on data, not gut instinct.

In conjunction with that software, Pollak developed the auto-retailing philosophy of sales velocity. At its core is the tenet that it ultimately is more profitable to price vehicles competitively, not seek to make a killing on them. Pollak says doing the former may result in less gross profit per unit, but a dealer ends up earning more money through higher-volume sales.

Pollak’s velocity ideas are included in Northwood’s automotive marketing and management program headed by Professor Elgie Bright, an advocate of Pollak’s approach. A book Pollak wrote on the subject is on the program’s student reading list.

“I’ve met a number of dealership managers over the years who believe in it and use it,” Bright says of velocity selling.

Pollak speaks at what’s officially called Northwood’s annual convocation ceremonies. But on campus, posters urging students to attend the event call it a “kick-off party.” File that under knowing your audience and what they’ll respond to. The event was packed.

Afterwards, at a lunch hosted by Northwood President Keith Pretty, Pollak recalls pushback when he first began preaching his velocity philosophy more than a decade ago.

“A lot of dealers threw me out of their offices,” he says of those times. “Out of frustration and desperation, I wrote a book (“Velocity: From the Front Line to the Bottom Line”).

“I brought it to market around 2006. It kind of went viral. It addressed the question of why dealers weren’t having the success with used cars that they once upon a time had.

“When the book went viral, things changed. Suddenly, instead of me knocking on doors, people were knocking on mine.”

He describes that period as the beginning of the change of the present-day dealership; “that is, the recognition by dealers that they not only should accept the Internet but embrace it.”

Pre-Internet, “there was a disparity of knowledge between car buyers and sellers,” he says. “Sellers had the upper hand. They knew what the cars were worth. Consumers knew very little. It was hard to shop and compare. Dealers over the years had perfected practices that optimized the opportunity of knowing more. It was a traditional playbook.”

Asked to define his velocity model, he says: “Reduced to its simplest form, it’s about transparency and recognizing that it’s likely – and becoming even more so –

that because of the Internet, the shopper knows every bit as much about the vehicle’s value as the seller does.

“So why not deal with them on a fair and transparent basis? But that was hard, because the whole automotive-retail industry grew up believing you control the customer and the deal.

“Over time, more and more dealers came around to say, ‘We’re going to put fair prices on cars and be up front with people on trade values. We’re going to be transparent.’ The newer generation of buyers wants and expects that. It’s been a slow but steady transition to spread that way of doing business, which is the right way.”

That’s largely taken for granted today. “But I can assure you, it was anything but that in the early 2000s,” he says.

In addition to Pollak, several Cox Automotive executives spend the day at Northwood. They line up for a ribbon-cutting ceremony for the school’s new Cox Automotive Solutions Lab.

It is part of a curriculum that focuses on using data to decide which vehicles to stock based on market demand and how to price them competitively to turn, turn, turn inventory.