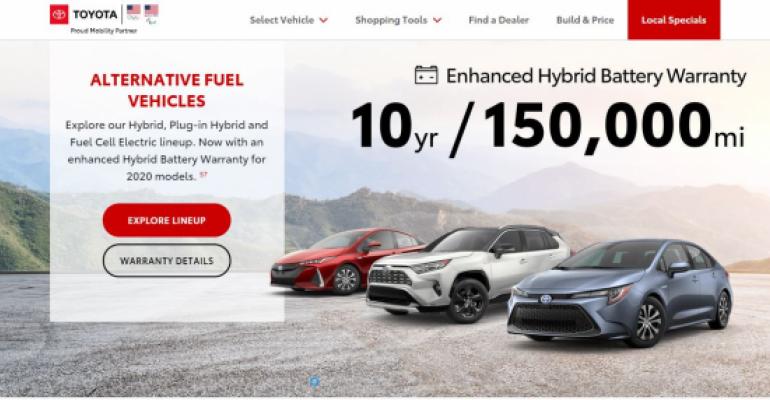 The automaker says recent research shows many erroneously believe traditional hybrids have to be plugged in, can’t be refueled at a gas station and batteries in electrified vehicles need to be replaced frequently.

GREENSBORO, NC – Toyota is extending the warranty on batteries in its hybrids, plug-in hybrids and fuel-cell electric vehicles nationally to 10 years or 150,000 miles (241,000 km).

The move is to help assuage those who fear battery woes and who may reject a hybrid, PHEV or FCEV for that reason.

Despite offering the Prius for nearly 20 years in the U.S., and the attention the car received from celebrities, “there were many traditional customers who still found it a hard sell, and honestly, it still is today,” Heather Updegraff, general manager-Toyota Vehicle Marketing for Toyota Motor Sales USA, tells media here during a Toyota alternative-powertrain event.

The automaker found via recent research that one of the key reasons people don’t buy a hybrid is that they believe “the batteries are expensive, and I have to replace (them) frequently.”

While Toyota has said only a small fraction of the nickel-metal-hydride or lithium-ion battery packs in its Prius hybrid have been replaced, largely due to collisions, not degradation, it nevertheless wants to offer more support.

“We want to expand on (our reliability reputation) to assure potential customers that we’ve got their backs,” Updegraff says. Toyota hopes the warranty also will motivate those shopping used cars to opt for a hybrid, PHEV or FCEV as it its transferable to all subsequent owners.

The warranty covers all ’20-model Toyota green vehicles. Other hybrid and fuel-cell components, such as control modules and inverters, already are covered as part of an 8-year/100,000-mile (161,000-km) warranty, she says.

Eight years/100,000 miles is the battery warranty Toyota offers in most states. Owners of Toyota hybrids in California and the 13 other states that follow its more stringent emissions regulations already have a 10-year/150,000-mile warranty.

The research Toyota recently undertook revealed a wide range of misperceptions about alternative-powertrain vehicles, a problem considering by 2025 it will be offering an electrified version of every vehicle in its U.S. lineup and it will be able to produce 5.5 million electrified vehicles globally by then. The company is seeking to reduce CO2 emissions from its new vehicles 90% on a global basis, from 2010 levels by 2050.

Toyota’s future lineup will include traditional gas-electric hybrid variants, as it does today, as well as more PHEVs and FCEVs, plus the automaker’s first battery-electric vehicle.

“Only 34% of respondents (in our research) were 100% sure a battery-electric vehicle didn’t have an internal-combustion engine,” he says.

Another misconception Toyota uncovered was that 25% of respondents thought a hybrid couldn’t be refueled at a gas station. “And only 42% said that was definitely false, so that’s after 20 years of having the technology in the market, and customers still are confused,” Murtha says, adding, “Essentially customers don’t understand their options, or how easy it is to use a hybrid.”

Updegraff says in another survey question, 40% of respondents didn’t want to buy a hybrid because they were concerned about how to fuel or charge it. “Almost half of those we asked didn’t known that hybrids are fueled the same way their current vehicle is, or any other internal-combustion-engine vehicle.”

She believes the source of that fallacy is nomenclature. “So plug-in hybrid also has ‘hybrid’ in the name, so I think people say, ‘Oh, hybrid, then I have to plug in (any) hybrid.’”

“Sure, we collectively, and in our dealer body, have not effectively explained the technology to the market…but consumers are just not that engaged in the specifics of their vehicle, and it’s tough. It’s tough to get through to them and help them understand the technology. The reality is we’re not in the public-service-campaign business.”

He says Toyota won’t be doing splashy advertising to explain how a hybrid operates, preferring like most automakers to focus on “the shiny object” and lifestyle aspects of vehicles that are more appealing to the average buyer.

However, Toyota, to show customers what’s in it for them, is highlighting the powertrain advantages of its hybrid models, such as power and efficiency, in the vehicles’ marketing.

It also is working to keep dealers educated, necessary due to the high turnover in sales personnel at retail stores, Updegraff tells Wards.

Toyota will be holding influencer events around the U.S., intending to reach multicultural buyers in particular, who she says tend not to be as familiar with electrified vehicles.

It also has added an “alternative-fuel vehicle section” to Toyota.com. On Oct. 10, the section was featured as the main content on the homepage, along with the enhanced hybrid-battery warranty for ’20 models.