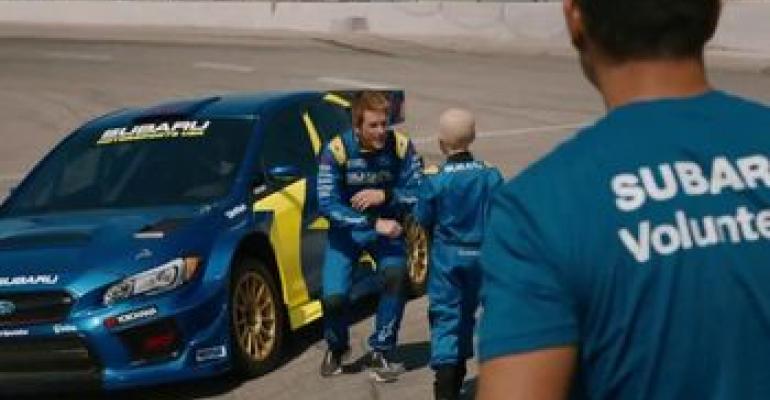 The two Subaru ads — “The Largest Impact” and “Give Back Anthem” — combined for 364.5 million ad impressions from Nov. 29 to Dec. 5 and highlight the manufacturer’s corporate giving efforts.

The ranking of the most-viewed automotive spots on TV -- those generating the highest number of impressions across national broadcast and cable TV airings from Nov. 29 to Dec. 5 -- comes from iSpot.tv, the always-on TV ad measurement and attribution company.

While Lincoln’s “Unexpected” rises to the top spot of most-viewed ads this week, the two Subaru ads — “The Largest Impact” and “Give Back Anthem” — combine for more ad impressions.

They feature the same music, largely the same script, and share the majority of scenes. Both received roughly 700 national airings, and both were backed by an estimated national spend of about $1.7 million.

And viewers responded. According to iSpot’s Ace Metrix survey data, the two ads blew away the industry competition in every category measure. “The Largest Impact” ranked 15.8% higher than the industry norm in “likability,” 10.2% higher in “attention” and 9% higher in “watchability.” Those results were largely consistent in its sister ad, “Give Back Anthem,” which ranked 10.7%, 17% and 8.5% higher than the industry norm in the same categories, respectively.

Together, they generated over 364.5 million impressions for the week. But because those were split (nearly evenly) between the two ads, “The Largest Impact” ranked third in overall impressions, and “Give Back Anthem” ranked fifth.

That split allowed Lincoln’s “Unexpected” to rise to the top spot. “Fox & Friends,” “Today,” and NFL football delivered the impressions for the ad, which viewers found “cinematic,” “soothing” and “nostalgic,” according to an Ace Metrix survey.

Nissan and Lexus round out the list, both having targeted national news and sports programming to deliver impressions. Nissan largely directed its budget at professional football games, while Lexus chose to focus on “SportsCenter.”

Nissan: Nissan@Home: From Dealer to Driveway

Subaru: Give Back Anthem