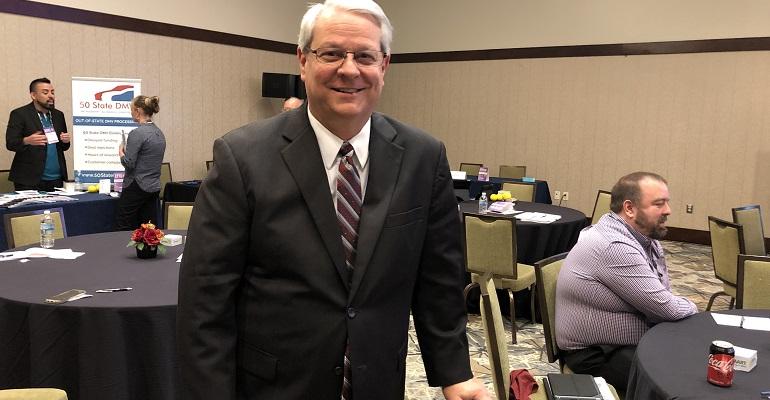 “(Customers) love it when you listen to them,” McCormick says at the EFI automotive conference. “They all have a sign around their neck that says, ‘Listen to me.’”
Dealers

Someone Say Amen to F&I

Rick McCormick is a clergyman who also trains dealership finance and insurance managers.

DENVER – Rick McCormick is an ordained minister who 20 years ago walked into an auto dealership and got a part-time job selling vehicles.

No longer a car salesman, McCormick now – in addition to his clergy work – trains dealership finance and insurance managers.

He is the first speaker to kick off an inaugural EFI Conference hosted here by a Facebook group called the Ethical F&I Managers.

With strong oratory skills, he at times sounds like he’s preaching at a revival meeting. In turn, conference attendees occasionally clap and voice hearty approval during his presentation, such as when he proclaims, “If you want to make more money, focus on the customer, not the money.” Amen.

He delves into the psychology of car shoppers. “Customers are trying to figure out if they like you or not,” he says, offering this advice to F&I managers in the audience: Do things that endear customers to you, such as building trust and listening.

“They love it when you listen to them,” he says. “They all have a sign around their neck that says, ‘Listen to me.’”

Salespeople who lend an ear endear themselves to customers, says McCormick, national account development manager at the training firm Reahard & Associates in Soddy Daisy, TN. “The more they like us, the more they buy from us. Show a genuine interest in them.”

As a trainer, he visits dealerships nationwide. He says he quickly can tell which ones are positive workplaces and which aren’t.

“You can walk in and in two minutes feel whether there are good or bad vibes,” something that’s apparent in part by how dealership managers and employees treat customers and each other, he says.

Car consumers may spend hours online shopping and researching, but most of them are keen to go to the dealership at some point, he says. “Customers want a knowledgeable expert to help them buy that car,” he tells conference attendees. “The vast majority want to finish the deal talking to you.”

His other tips include the following:

McCormick’s ministry includes pastoring to prisoners in Georgia. And he’s done his share of weddings and funerals.

He tells of conducting funeral services, pausing just before the end and saying: “One more thing. Someone in this room is going to be next.” Then he walks off.

That wakes them up, anyway. McCormick admits it’s jolting. “But it gets people thinking about their lives.”