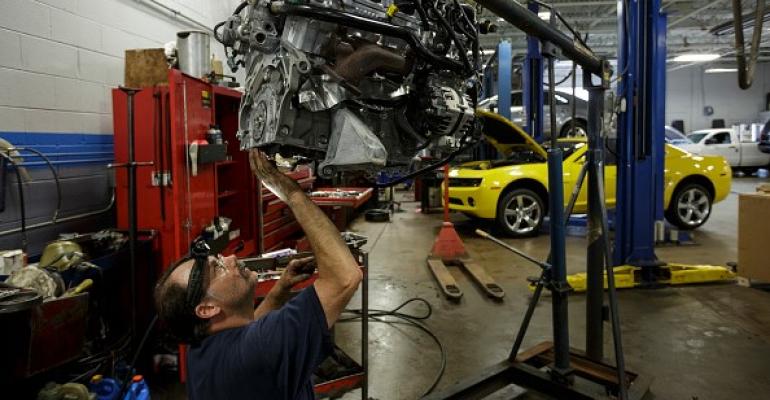 Service Ops Revenue Down, But 2nd Half Looking Better

Dealership service-bay revenues are down as people work from home and venture out less often. But as vaccines are administered and people become more comfortable traveling, dealership groups are optimistic about better business in the second half.

Some of the nation’s biggest dealership groups expect service and parts business, especially body shop and collision repair, to recover in the second half of this year, as consumers begin to drive more.

“The forecast for 2021 is definitely heavier weighted on the second half,” says Jeff Dyke, president of Sonic Automotive, in a phone interview. “As the vaccine gets out, and people get more comfortable with traveling, we’re going to have people back on the road again.”

Mike Jackson, AutoNation chairman and CEO, has similar expectations for parts and service, which AutoNation calls the “customer care” department, according to a conference call to announce fourth-quarter earnings.

“We estimate at the moment that miles driven are down about 10%. Our actual customer care business in the fourth quarter is down 4%, 5% something like that. And so, we view it as a gradual recovery,” Jackson says.

AutoNation CFO Joe Lower says other pieces of the chain’s service and parts business, such as customer-pay and warranty, are almost back to year-ago levels, while collision repair is down nearly as much as miles-driven are down.

“Again, I think as the miles recover, we'll see that portion of the business in particular improve, and we are very optimistic about customer care as we go through 2021,” he says.

Analysts on the fourth-quarter earnings conference calls noted that starting in March and April, year-ago comparisons should get much easier for the dealership groups, percentage-wise, because dealership business really bottomed out in March and April of 2020, due to business shutdowns related to the pandemic.

“At the end of the day, the body shop business is really defunct, a lot less driving, a lot less accidents,” says Dyke of Sonic Automotive, in an earnings conference call. “And so that's been a big struggle for everybody in the industry in total.”