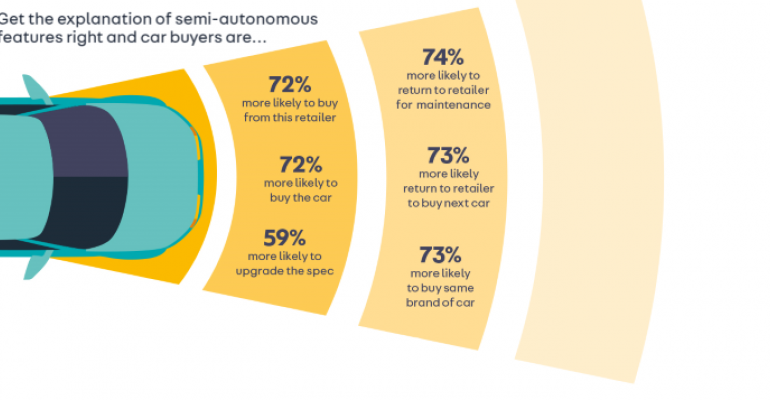 U.K. retailers and manufacturers are missing out on consumers’ appetite for increasingly sophisticated – and lucrative – automotive technologies because of the use of complicated marketing jargon, unclear pricing and a lack of frontline education.

That’s the message from a new survey by consumer insight agency Join the Dots that finds brands that explain the technology, such as semi-autonomous features, see higher conversion, higher prices and higher return visits for maintenance and next-car purchases.

The research for digital automotive marketplace Auto Trader found 31% of 3,000 consumers surveyed have at least one semi-autonomous feature in their current vehicle and an average of 2.1 features.

Some 80% say they would pay extra for semi-autonomous systems in their next car, and 51% would be more likely to buy from the same brand again because of these features.

The figure increases to 57% for both men and people aged under 35.

Despite the opportunity to upsell and build brand loyalty, just 35% of those surveyed say the features were clearly explained to them during the sales process, and only 33% received a demonstration.

The long-term impact of greater frontline education is significant, with 74% more likely to return to the same dealer for maintenance. Plus, 73% would return to buy their next car from them, and 73% would buy the same brand of car.

Nathan Coe, Auto Trader’s chief financial officer and chief operating officer, says the aim of the survey was to cut through the hype to get car buyers’ genuine views.

“The more we can enhance the buying and driving experience by focusing on technology that genuinely meets consumer needs, the more we can unlock this desire and encourage consumers to change their car more frequently,” he says.

The use of complicated marketing jargon and acronyms was highlighted in the survey results. Most car buyers either miscategorized the function or simply failed to appreciate the advanced capabilities of brand names for sophisticated semi-autonomous features.

Coe says with car buyers either unaware or unsure of these features, it’s unlikely they’ll request them when visiting a dealership.

Cason Grover, Hyundai senior group marketing manager-vehicle technology planning, says the problem is the myriad of systems available on new vehicles is confusing to the consumer and this is worsened by each manufacturer having its own terminology for their autonomous safety technology.

“That’s why when we launched our SmartSense driver-assistance system, we made the conscious decision to explain the system in terms the consumer can understand – the functions, rather than the system name,” Grover says.