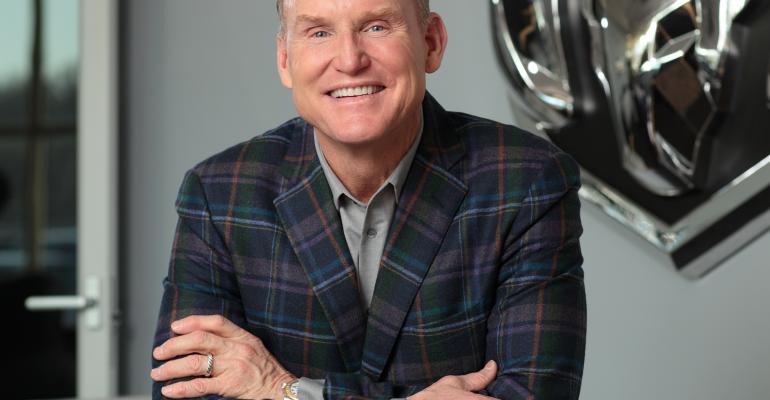 “I want to sell anything my customers want to buy, period,” Lutz says. “It could be powered by turtles. I don’t care. If there’s demand for it, I want it in my showroom.”
Dealers

Wes Lutz urges an audience of journalists to “question the hype, ask for proof and find out what they are not telling you.”

DETROIT – National Automobile Dealers Assn. Chairman Wes Lutz calls on the media to challenge three claims he disputes: that ride-hailing largely will replace personal vehicle ownership, self-driving vehicles will be safer than human-driven ones and dealers are loath to sell electric vehicles.

“Each one of these narratives might sound right,” Lutz tells a gathering of the Automotive Press Assn. here. “But the truth is that each one is built on false or unproven pretenses. And these narratives are put out there by stakeholders that have an obvious incentive for them to be true – even if they aren’t.”

He says the media should more aggressively challenge such claims. He calls his speech “a mini-rant,” but keeps his criticism civil, avoiding “fake-news” terminology.

“Let me be clear: This isn’t a press-bashing speech. I love the press, and particularly love the automotive press.” But he urges his audience to “question the hype, ask for proof and find out what they are not telling you.”

Lutz says the biggest false narratives is that ride-hailing services such as Uber and Lyft are less expensive than owning a personal vehicle.

He cites a recent AAA Foundation for Traffic Safety study that says the cost of relying on ride-hailing services as primary transportation in 20 of the biggest U.S. metro areas is more than twice as much as owning a car.

“That certainly doesn’t sound like the spin we hear from Silicon Valley, mobility think tanks or Wall Street,” he says.

Lutz calls the study results “one of the biggest auto-industry stories of 2018, and it received only a smattering of coverage.”

People owning a vehicle and using Uber or Lyft when it makes more sense than driving is “an evolution, not a revolution,” he says.

“I know how my customers define transportation freedom,” says the owner of Xtreme Chrysler, Jeep and Ram in Jackson, MI. “They define it by having the ability at any moment to go where they want, when they want.”

The next narrative he challenges – “or should I say, I’d like you to challenge” – is that impending autonomous vehicles will put humans to shame as drivers.

“Yes, there were 37,000 fatalities on the roads last year. But Americans drove more than 3.2 trillion miles. That means nearly 90 million are driven in the U.S. for every motor vehicle death. That’s 342 years of driving – 24 hours a day, 7 days a week, 52 weeks a year – between traffic deaths.

“So here are the questions you should be asking automakers, regulators, and safety advocates right now: What technologies are coming in the next five years that will reduce driving fatalities and don’t involve removing steering wheels, brake pedals and humans?”

His third refutation takes aim at claims that dealers are unenthusiastic about selling EVs. A recent study indicated more EVs would be sold if dealership salespersons weren’t downplaying them and instead steering customers to vehicles with internal-combustion engines. The latter are under the hood of about 96% of vehicles bought in the U.S.

“I want to sell anything my customers want to buy, period,” Lutz says. “It could be powered by turtles. I don’t care. If there’s demand for it, I want it in my showroom.”