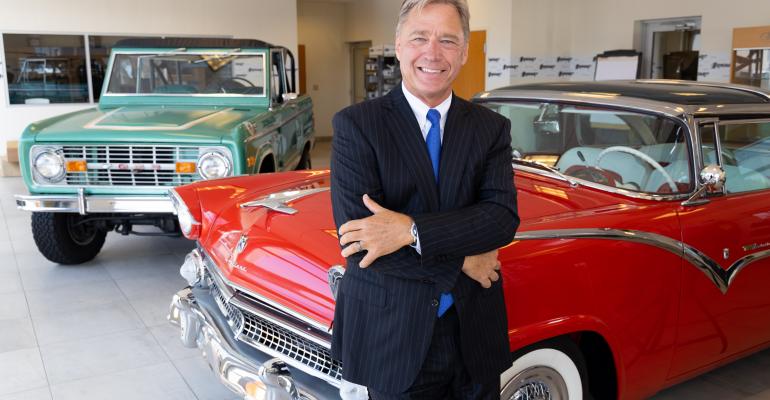 “For over 100 years, we have been turning disruption into dollars,” says Ricart, shown here at a vintage-vehicle section of his dealership campus in Ohio.
Dealers

LAS VEGAS – Car dealers have a reputation as optimists and survivors.

That comes through during Rhett Ricart’s first speech as the 2020 chairman of the National Automobile Dealers Assn. during the trade group’s annual convention and expo here.

“You’ll be just fine,” he tells an audience of franchised dealers. “Actually, we’re going to be more than just fine.

“There’s something to be said of auto dealers who went through wars, recessions, depressions, oil embargoes, global economic meltdowns, OEM bankruptcies, and are still upright, standing tall and stronger than ever.”

He says dealership service departments do a brisk business, and predicts that will continue in the impending age of electric vehicles, despite predictions that EVs will require less service because they have fewer parts than vehicles with internal combustion engines.

But they will require well-trained auto technicians to repair and maintain them, Ricart says. “If you think it’s going to be easy fixing an all-electric or fully autonomous car without a tried and true service-department network to back you up, you’re in a dream world.”

A second-generation dealer, he is president and CEO of Ricart Automotive Group in Columbus, OH. “And we are gunning our accelerator into this modern world.”

His speech hits a level of defiance at times. So did an earlier convention address by outgoing NADA Chairman Charlie Gilchrist. He told a dealer audience: “Don’t let others define who you are. Hold strong to your identity.”

Ricart has a few words for some others in the auto industry, particularly newer entrants and so-called disruptors.

“The new players in the game aren’t ‘disruptors,’” he says. “They’re just new. The beauty of our business is that we thrive on disruption. When you think about it, dealers make their living by confronting, understanding and ultimately harnessing disruption.”

He adds: “For over 100 years, we have been turning disruption into dollars.”

Ricart vows dealers will "meet disruption at the door, and no matter what its name is, we will answer.”

That's because dealers constantly re-invent themselves and defy the odds, he says.