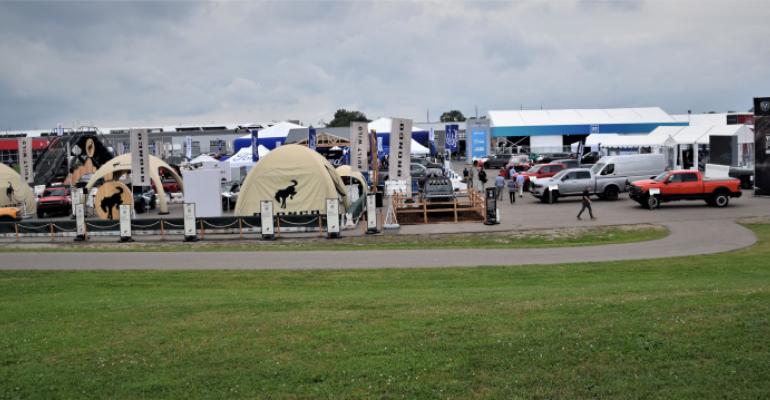 Tom Murphy
Hometown automakers Ford, General Motors and Stellantis dominate the displays at Motor Bella, but virtually every brand is represented at the show, including exotics.
Dealers

Motor Bella Gets Lots of Praise – and Rain

With heavy rain in the forecast, Motor Bella activities are canceled for today, resuming tomorrow when the public days begin.

It was beginning to look like the Detroit Automobile Dealers Assn. couldn’t catch a break in staging its reimagined annual auto-show extravaganza, or even something like it.

Last year, the DADA’s North American International Auto Show was supposed to transform into a summertime indoor-outdoor event in the Motor City. (In years past, the show was held in the Detroit deep-freeze month of January.)

The ambitious plan for 2020 was to include a fair-like flair and an open-air sideshow called Motor Bella, featuring clusters of sleek euro-cars. Then COVID killed all those grand plans, along with so many other public events everywhere.

Wait until 2021, said the Detroit dealer association. But early this year, the trade group once again shelved the auto show amid COVID concerns.

But wait. All was not lost. In lieu of NAIAS, the outdoorsy Motor Bella would debut this year, not as a sideshow but as the show. And it wouldn’t even be in Detroit, but at a private auto-track complex called M1 Concourse in Pontiac, about 20 miles (32 km) to the north.

DADA Executive Director Rod Alberts puts it this way: “The traditional auto-show model is changing. We cannot ignore the major disruptions caused by the pandemic and the impact it has had on (automaker) budgets. As such, we will be providing an amazing experience to the media, the auto industry and the public in a cost-effective way.”

The DADA says the novel event allows people to attend an auto show in a “never-before-experienced way while also addressing continued COVID-19 concerns about indoor events.”

OK, open-air events are great, whether they are picnics, weddings, ballgames, parades or new “auto-centric” shows. Until it rains.

And, sure enough, it started to do that on Tuesday, the first day of Motor Bella’s media and industry two-day preview that precedes the Sept. 23-26 public dates. Because of the on-and-off rain, the first round of attendees had one eye on the displayed vehicles and another on the sky. Umbrellas popped open. Worse, early forecasts called for rain throughout the week. 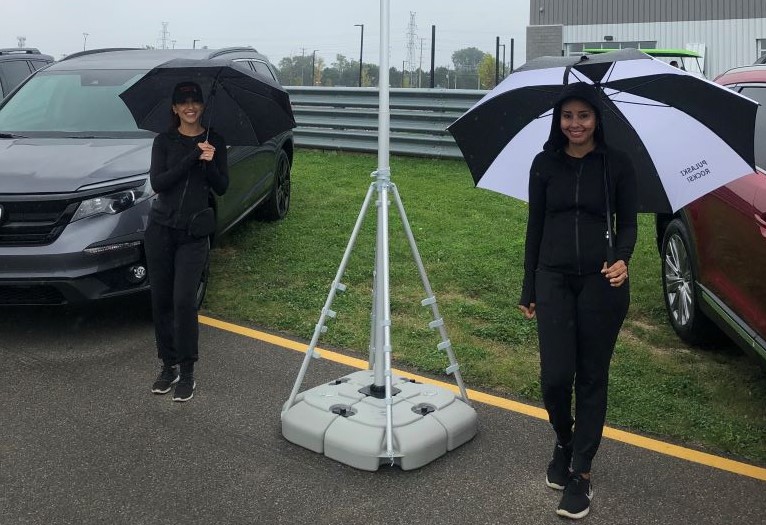 “I like the idea of an outdoor show, but we’ll see about the weather,” says Gary Witzenburg, president of the group that puts on the North American Car, Truck and Utility Vehicle of the Year. “If it rains, we’ll cope.”

If? When he said that, it was raining. Well, drizzling off and on. Then it stopped.

Then it really came down early Tuesday evening, while receptions were being hosted, some of them in tents as rivers of stormwater washed through. Folks took it in stride – and wished they’d brought umbrellas.

But with heavy rain in today's forecast, the decision was made Tuesday night to cancel all Motor Bella activities for today, resuming tomorrow when the public days begin.

The weather forecast for the public days calls for better weather, says a finger-crossing Frank Buscemi, a spokesman for the Detroit dealer group.

Motor Bella features a more interactive approach than traditional auto shows. Vehicles do hot laps here and off-roading up and down man-made hills there (Jeeps and Ford Bronco).

“It’s different from an indoor auto show with cars up on carousels,” he says. “Here, they are out in the open, and many are in motion. It gives people an opportunity not only to see a vehicle but see what it can do. It is wonderfully different from a traditional auto show.”

McDonald says he has a “different perspective” on M1 Concourse because he owns a garage on the premises. It houses his two Porsches and a Mazda MX-5 Miata, which he drives on the facility’s 1.5-mile (2.4-km) course.

For Motor Bella, some automakers display vehicles on the track itself. Others created temporary pavilions to show their stuff. 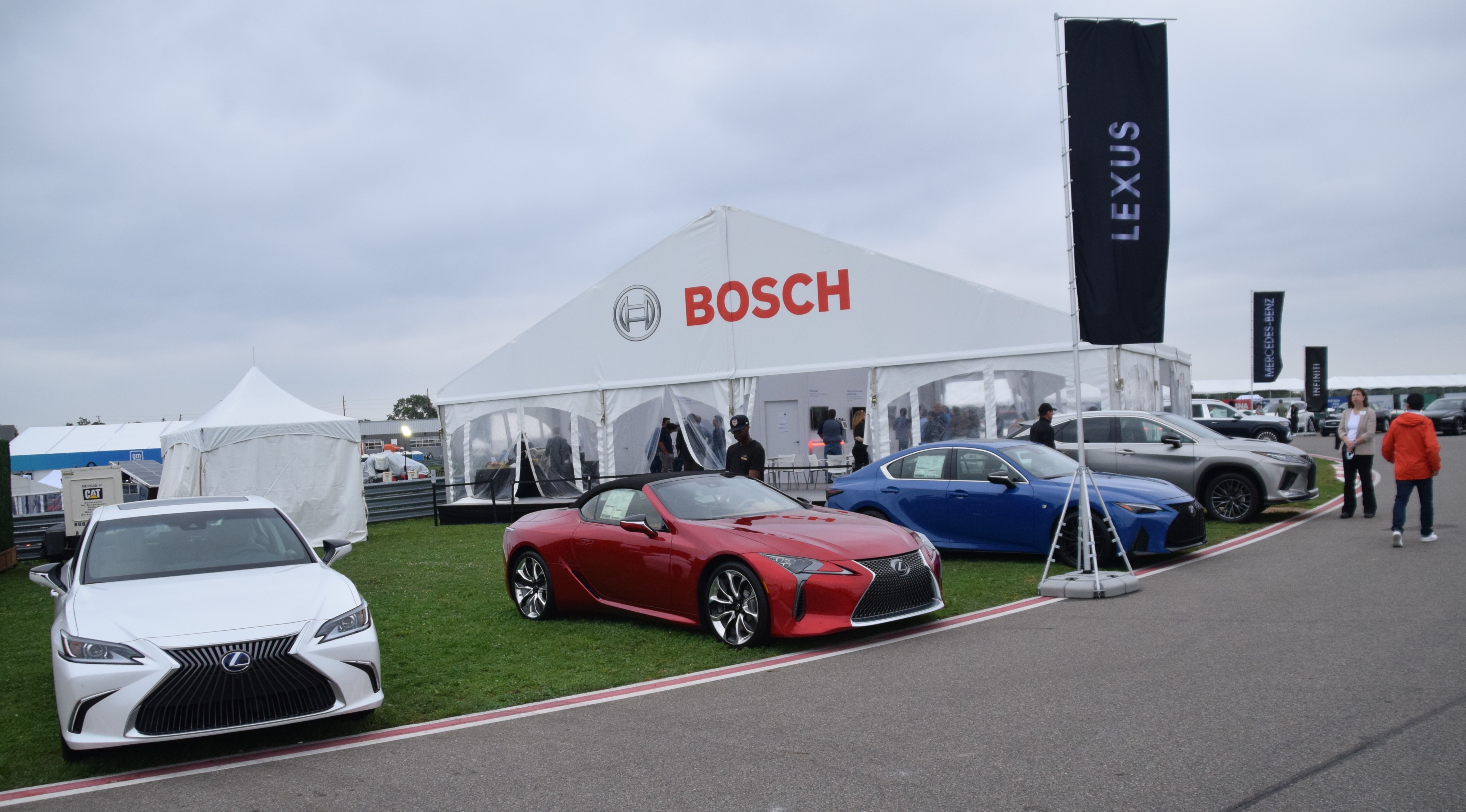 Bosch and Aisin were among suppliers with pavilions at Motor Bella.

McDonald likens M1 Concourse (so named because it is along metro Detroit’s main drag, Woodward Avenue, officially designated M-1) as “a country club for car guys.”

Alberts says: “This all-outdoor venue, with adrenaline-pumping track activities and a full complement of OEM and technology exhibits, is going to offer the sights, sounds and even the smell of all that the new world of mobility has to offer.”

It’s not that he dislikes NAIAS per se. It’s that the former January time slot of the annual event left the Santa Barbara, CA, resident cold.

Plans for 2022 are to hold NAIAS in late September in Detroit, with Motor Bella “probably incorporated into it,” says Buscemi.

Motor Bella may remain at the M1 Concourse or relocate to downtown Detroit, its originally intended spot. The DADA board hasn’t decided yet.

“They’re still working on that, but this is so unique, so different,” Buscemi says. “The media and industry response to it has been great.”

Rides are given in Ford Bronco, Mustang Mach-E.