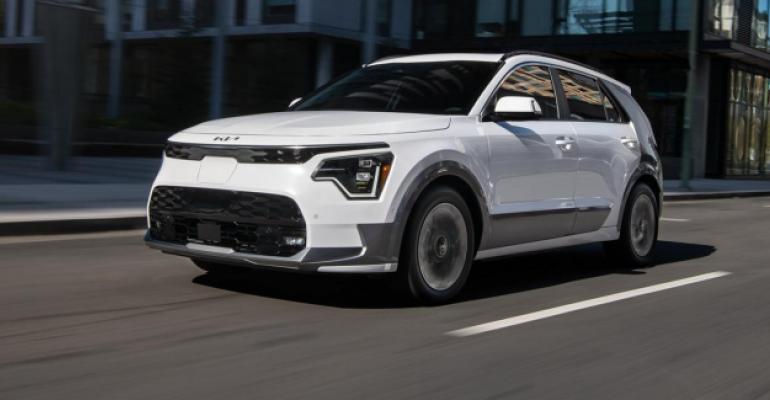 The financial profiles of battery-electric-vehicle buyers are similar to those who purchase traditional luxury vehicles, but the mainstream BEV buyer approaches a purchase very differently.

Although auto financing for BEVs represents only 5% of the market, that percentage has doubled in the past year and will continue to grow as more BEVs arrive, Satyan Merchant, TransUnion senior vice president and automotive business leader, tells Wards. That will shake up auto financing throughout the marketplace, he adds.

“The profile in some ways looked a lot like a luxury ICE buyer, meaning their credit score range was roughly the same or in the same ballpark,” says Merchant. “The amount of down payment and the loan-to-value was around the same. Even the amount financed was relatively similar.

“But the mainstream EV buyer, while they had the strengths of, say, a luxury ICE consumer, they were still aiming for monthly payments that were similar to those of a mainstream ICE vehicle.”

The survey targeted mainstream BEV buyers because automakers such as Hyundai and Ford have an array of non-luxury BEV releases in the pipeline..Those are expected to cut into market share for Tesla and other luxury BEVs.

That’s significant considering BEVs are rapidly replacing vehicles with internal-combustion engines, growing from just 5% of the market last year to an estimated 40% by 2031, reports TransUnion.

Dealers will want to note that BEV buyers are more eager to shop and finance online than ICE buyers. More than one-third of BEV owners and those considering buying BEVs conduct research on vehicles online. The number declines to 28% for non-BEV buyers.

“They want to get a good idea of their financing, and they may even want to arrange financing (online),” says Merchant. “But at the same time, they also said they want to go into the dealership. They do want to go somewhere to touch and feel the car, kick the tires, go for a test drive.”

And it’s smart business to prepare for the influx of mainstream BEV buyers, says Merchant.

“The (BEV buyers’) performance, at least based on what we can measure so far, is very good and strong,” says Merchant. “Auto loan delinquency rates are still relatively low, and the EV consumer (delinquencies) were lower than for their counterparts.”

Plus, loan delinquency rates for EV buyers are lower. The 60-(day?) plus past-due rate after 12 months for mainstream loans originated in 2020 was 0.72% for EVs compared with 0.92% for ICE buyers, TransUnion reports.

“I think what dealers can do with this information is understand, number one, the profile of buyers of these cars is not exactly the same when comparing to ICE for the same segment of vehicle,” says Merchant.

“So understand what that consumer profile is in the loan programs…and then for that consumer shopping experience, invest in (technology) for pre-qualification.”