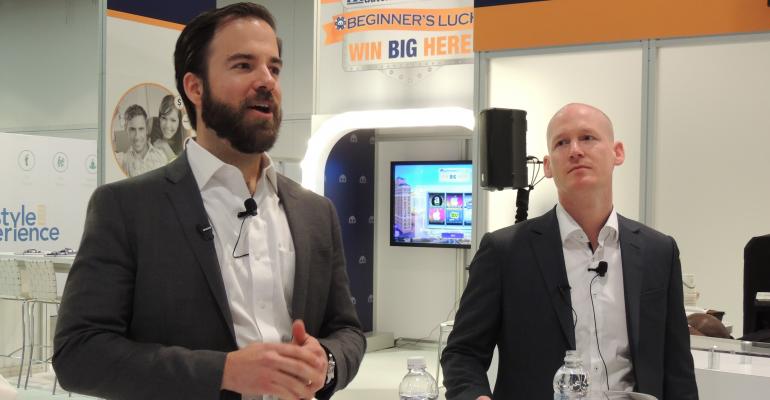 Schnabl, left, and Gnauck at this year’s NADA convention and expo.
Dealers

In a Wards interview, Marco Schnabl talks about the power of predictive analytics, the roots of his company, the difficulties of running a dealership and how he as a German native fresh out of college went to work in the U.S. selling cars.

While working at a New York City car dealership, Marco Schnabl and Johannes Gnauck bounced their idea for an automotive predictive analytics system off some very important customers.

Those Mercedes-Benz Manhattan customers, including the CEO of Goldman Sachs, indicated sales manager Schnabl and top salesman Gnauck were on to something.

The two German natives went on to found the technology company automotiveMastermind in 2013.

It does that by extracting thousands of customer data points from dealership management systems and melding them with big data from assorted sources, including social media, financial records, buying-cycle patterns and information from participating automakers and their captive financing units.

In a Wards interview, Schnabl talks about the power of predictive analytics, the founding of the company, the challenges of running a dealership and how a German native fresh out of college went to work in the U.S. selling cars.

He also gives two versions of where the company was founded (and says both are true). Here’s an edited version of the Q&A.

Wards: What have you learned in the past five years?

Schnabl: A ton of stuff. We were first to market with anything predictive for the auto vertical. Amazon is the model we thought was relevant to the auto industry.

Since we went to market, we’ve seen other companies do good work, or try to, in the industry as well. But we’ve evolved much further, going from manually built algorithms to machine-learning algorithms that become more intelligent over time. The fuel of these analytics is data, and we now have five years of experience. We have millions of purchases that have been transacted. Our technology has gotten smarter from the record we generate and predict.

Wards: Aside from what the system has learned, what have you learned in the marketplace? Did you build this, and dealers came, or were they clamoring for it?

Schnabl: Working at a dealership, I was customer-facing and truly went through the exercise of putting data points together and then relying on the experience of selling cars. When we went to market, that’s exactly how I explained automotiveMastermind.

I told dealers impressive technology is behind this. But dealerships don’t care how you drive or fuel the platform. They care about you providing value so they can sell more cars and provide better customer experiences. That’s the value proposition.

This is how we explained it: You look at customer lists, how many cars they bought in the past, how many times have they been in service, miles they are driving, value of the car, how much they have paid off, whether they are a luxury or economy buyer.

Piecing together the puzzle is something every great salesperson has done manually to determine the chances of closing a deal.

That gut feeling, that experience that dealership personnel have accumulated, is what we harvested and put in a predictive technology that scores customers (on the likelihood of purchasing).

When you explain that, dealership personnel quickly understand.

Wards: Do you see this as mainly for large urban dealers or is this also applicable to smaller stores?

Schnabl: Our clients are all over the U.S., from big metropolitan dealers to small rural mom-and-pop family-owned stores. I’d almost argue a small dealership needs this more.

Wards: Any surprises over the past five years?

Schnabl: Many. For example, we’ve learned an interesting analytic that a military member who qualifies for a specific OEM incentive has a different price elasticity than someone who gets a regular discount of the same size.

In other words, if we acknowledge you’ve been in the military and give you a $2,000 discount to show gratitude, that is worth more to that customer than it is to someone who simply got $2,000 off.

Wards: Do you think all dealers will use predictive analytics at some point?

Schnabl: Yes. There is so much technology pushing into the marketplace, a lot of the legacy business will evolve or get pushed aside. Having cutting-edge technology will be a necessity of being competitive and relevant.

It can give you the best prediction and all the reasons why and when someone will buy a car. It can help get people to your dealership website or door. But people still want human interaction when they buy. People still buy cars from people.

This is another exciting thing we’ve learned. Despite all we’ve heard about Millennials, they still want to test drive the car, meet the salespeople and look them in the eye. Yes, you need the technology, but you also need great people on top of that. Cars will be sold purely digital to only a certain subset. Trends indicate living in a fully digital world is not all that satisfying.

Think about the experience you have at an Apple store. It’s clean, the staff is super-knowledgeable. It is a great, seamless experience. We’re not far away from that. The human component will be a big part of that.

Wards: Most people go to Apple stores, interact with the personnel and come away with a good customer-experience feeling. That happens at a lot at dealerships, too, but not all the time. What’s going on when it doesn’t happen?

Schnabl: Look, selling cars is hard. Some people feel overworked. Some are not close to hitting monthly quotas, so they’re stressed out. Some aren’t trained enough to ask good qualifying questions and have a good conversation. Then it seems like the OEM is always changing programs.

It goes on and on. It’s not rocket science, but as a whole the industry struggles to create good environments for people to succeed. Many dealerships operate successfully every day. But others don’t. It’s not that people don’t want to succeed. Again, there are many moving parts.

Wards: How did you land a job at a U.S. dealership?

Schnabl: Growing up in Germany, the auto industry was always something magical to me. My father was in it for more than 40 years. (Mercedes-Benz Manhattan, below) 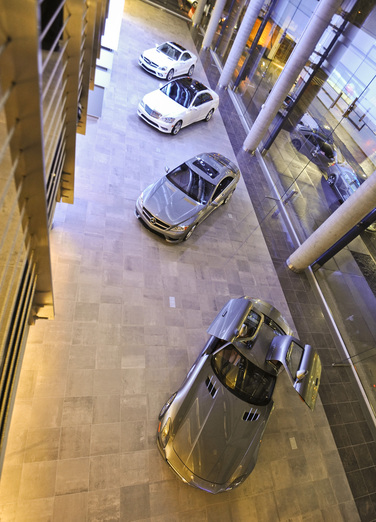 WardsAuto: What did he do?

Schnabl: He worked everything from retail to wholesale for a variety of large OEMs in Europe, including Fiat and Volvo. My whole life I’ve been in that world and found it fascinating. I went to college (studying business and industrial production) through Daimler (on a scholarship). In return, I would work for them when I graduated. During my undergrad journey, I had a 6-month stay at the Manhattan store (a dealership Mercedes-Benz and its parent company Daimler own).

I fell in love with Manhattan and selling cars there. Rather than go back and work in Germany, I got an offer to make my first stay with Daimler at the dealership. I thought selling cars would teach me a lot about the industry. I loved it.

Wards: Did you and Johannes Gnauck come up with the automotiveMastermind idea at the dealership? The story I heard that it was at a kitchen table in a New York apartment.

Schnabl: The kitchen table was about nine floors above the dealership, because that’s where Johannes lived. So either story is true.

We had met when Johannes applied for a sales job at the Manhattan dealership. I interviewed him and thought he was an excellent candidate. I hired him, and he broke every sales record. Super smart. Always found an angle to get the customer to say, “Yes.”

We were inspired by people buying cars from us. Some of them were amazing entrepreneurs. People like (Goldman Sachs CEO) Lloyd Blankfein and (former Goldman Sachs COO) Gary Cohn. You talk to these people and say, “We’re thinking about this, we have all this data. Where should we take it?” The response was, “In our industry, we utilize predictive analytics to think about future outcomes. Maybe you can generate an index for each customer.”

Thinking about what other industries did and being inspired by the people from these industries motivated us. We said, “We can do this. We should at least try.”