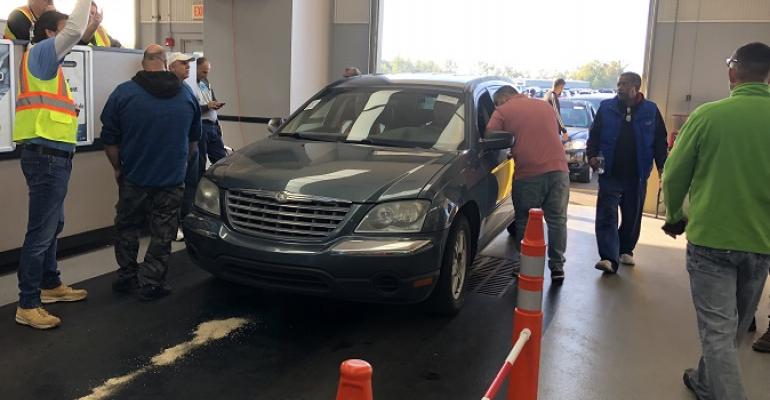 Down the bidding lane at Manheim Detroit Auction.
Dealers

Life in the Fast Lanes at Manheim Auctions

In “the arena,” vehicle bidding ranges from hand raising to staring at the auctioneer.

CARLETON, MI – “Are you looking at me?” Yes, a memorable Robert De Niro line from the movie “Taxi Driver.” But it’s also something Manheim auto auctioneers could ask of certain bidders.

That’s because some auction attendees bid – not by conventional hand gestures or call-outs, but simply by looking at the auctioneer, notes Matt Trapp, a Manheim regional vice president.

“Because some people don’t want other bidders to know they are bidding,” Trapp tells Wards at the Manheim Detroit Auction here, a sprawling facility amid farmland southwest of the big city.

Auto auctions can resemble high-stakes poker games in the way some participants play, he and colleagues tell a group of media visitors whose tour includes watching a live auction where more than 2,000 vehicles are offered for sale. 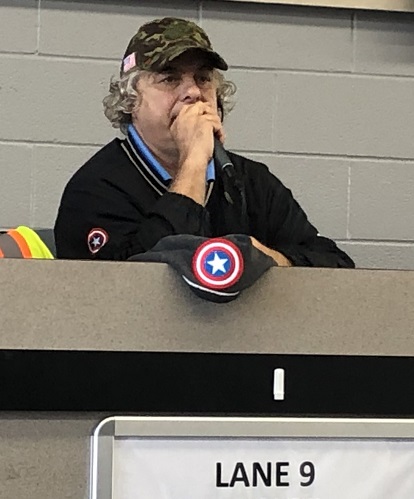 In tactics bordering on cutthroat, some bidders, who realize a competitor really wants a vehicle, will purposely drive up the price to make that person pay more.

Then there’s the story of a dealer who bought a certain BMW only because he knew a competitor sought it. The buyer later told an auction employee: “I didn’t want that BMW. I just didn’t want him to have it.” (Manheim Detroit auctioneer, left)

Before they visit the auction floor, the journalists are warned, “Please don’t wave at the auctioneers.”

As fast and furious as the auction action can get, most of it follows a straightforward routine.

In each lane, a steady stream of vehicles occupy the “block” for 30 or so seconds while a rapid-talking auctioneer talks them up and takes offers from both in-person attendees and online bidders using Manheim Simulcast, one of the company’s Internet auction platforms.

It’s rinse and repeat, hour after hour as vehicles enter what insiders call “the arena,” then, as quickly as they arrive, leave to make room for the next four-wheel, multi-ton item up for bids.

Reminiscent of an assembly line, it’s something to see. And hear. Especially the din several auctioneers create by speed-talking into microphones at the same time at their individual stations.

The inventory can range from expensive vehicles that eventually will take a place of honor on a dealership lot, to heaps that draw the interest of salvage yard agents attending the auction. 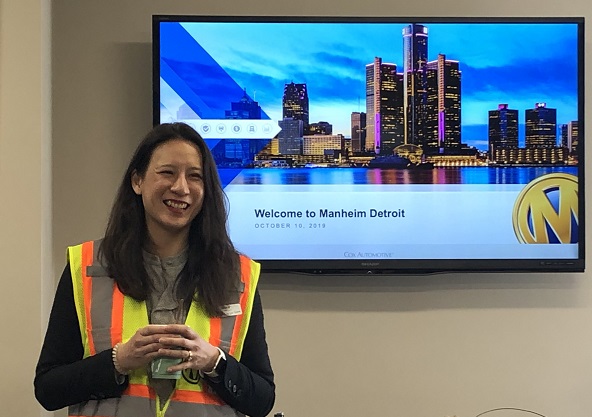 Mandy Savage, Manheim Detroit’s general manager, previously worked at an auto auction near ritzy Palm Beach, FL. “The most expensive vehicle we sold there was a $1 million Bugatti,” she recalls. “We were glad to get it off our lot,” she adds, alluding to the risk of holding such a big-ticket vehicle. (Manheim President Grace Huang, left)

Things aren’t that pricey at the Detroit auction, where the most memorable cited vehicles to go down the lane include a couple of 717-hp Dodge Challenger Hellcats.

Auctioned inventory skews toward off-lease vehicles, units rental-car companies put out to pasture and trade-ins dealers take but don’t necessarily want to retail themselves for whatever reason.

The used-car market is a $760 billion business, says Manheim President Grace Huang. “There are 280 million used vehicles in operation. All vehicles on the road are used, even the ones that are newly purchased.”

Manheim’s online bidding has enjoyed double-digital annual growth. Dealers have become more and more comfortable with it. Detailed condition reports make it increasingly unnecessary to see and touch a vehicle. Buy-back guarantees resolve cases in which buyers beef about not getting what they thought they were purchasing.

Digital buyers last year accounted for 2 million Manheim purchases, 47% of inventory. When Manheim launched its simulcast system in 2002, only 47 vehicles were sold through it. Today, about 1.5 million are. (Other online platforms account for the rest.)

Manheim people are asked about his comments. 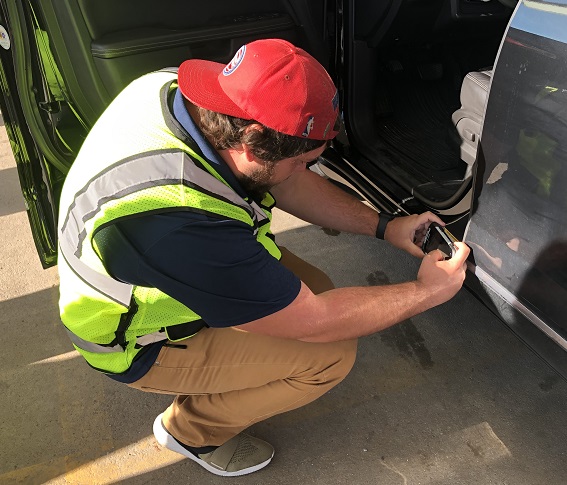 “The fewer the moves, the safer it is,” Huang says, predicting a day when auctioned vehicles will stay put and online bidding becomes even more prevalent. “We really focus on safety, but the safest situation is when you are not moving vehicles.”

Accidents can happen when, say, a distracted dealer looking at his mobile phone screen walks in front of a moving car entering or leaving a lane. Then there are the risks of collisions stemming from inventory parking-lot traffic. (Josh Pershing inspects a vehicle, left)

Even if auto auctions went entirely digital, “a car is a physical thing and you still need physical space for it to live,” Huang adds. Accordingly, “land is vital to auctions’ future and vital to the digital space.”

She adds: “We’d love to see 100% of car sales transacted digitally. It doesn’t mean the car isn’t here. We reassure consigners digital doesn’t have an impact on vehicle values.”

In addition to the arena, the expansive layout includes outbuildings for reconditioning, detailing and body-shop work and inspections. 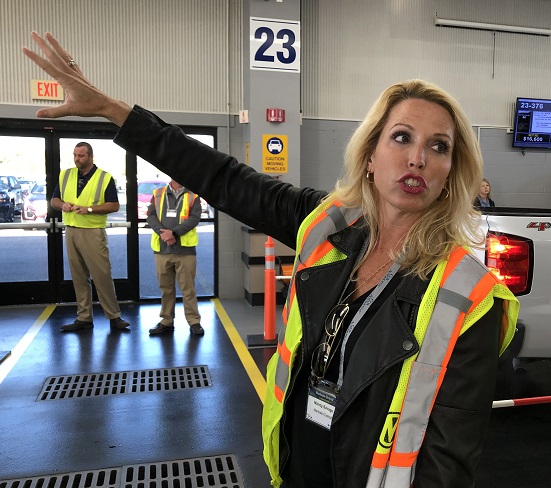 “If the condition report says a vehicle has a 2.0L engine and it actually has a 1.5L engine, someone is going to be upset,” he says. “We check to make sure a vehicle is contented correctly.”

Arbitrations occur now and then, Trapp says. But they are relatively rare. “Dealers don’t want to arbitrate unless they have to.”

An example of an arbitration issue: An engine knocks, and the condition report failed to mention that. “If the buyer says the knock is going to cost $700 to fix, the seller can either pay the $700 or take the vehicle back,” Trapp says.

As a native Southerner, Savage says a big adjustment in coming to Detroit is wintertime auctions. If the snow must go on, so must the show. Still, “it’s annoying to me is when we’re doing all of this in the snow,” she says.