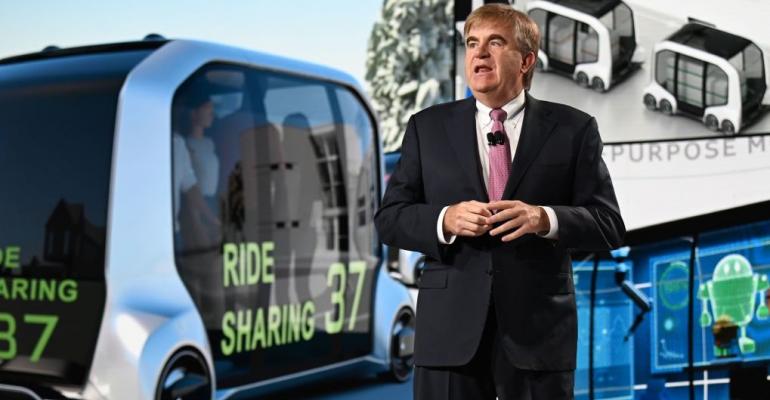 A top Toyota U.S. executive foresees “a solid car market for everyone” in the industry this year and next following a shaky 2020 because of COVID-19’s widespread effects.

“There are headwinds but I think tailwinds will offset them,” Carter tells Cody Lusk, president of the American International Automobile Dealers Assn. Their discussion last week was part of the trade group’s series of online events.

On the negative side, Carter says, “There’s still the pandemic, the industry in general has low inventory and the supply chain remains extremely fragile,” particularly because of a current microchip shortage.

But the positives include the development of COVID vaccines, low interest rates, an underlying good economy and strong real estate and stock markets, he says.

Moreover, “we have a new administration that seemingly is prepared to put trillions of dollars in the market,” Carter says of President Joe Biden’s proposed economic stimulus package. “I see no reason why we can’t get this industry back up north of 16 million units.”

U.S. light-vehicle sales were 14.46 million units last year, down from 16.95 million in 2019 and, before that, four straight years of sales exceeding 17 million, according to Wards Intelligence.

But 2020 sales could have been worse: In the dark days of last spring, the seasonally adjusted annual rate of sales was in a tailspin.

“In April, the SAAR fell to 8.8 million,” Carter says. “We’ve been through a lot but even during the financial crisis (between 2007 and 2009), the industry never fell to an 8.8 million SAAR. It was the biggest contraction we’ve ever seen, and it went on for seven weeks.”

However, after the trough sales months of March and April, “every consequent month got better,” he says. “You could feel the energy coming back in the third quarter. By the fourth quarter, the industry was off and running.”

But he qualifies his answers for both.

“Electrification will happen in this industry,” he says. “The question is the rate of adoption. It will take time to evolve.”

Internal-combustion engines will remain the dominant powertrain in the near-future, he says. “Beyond 2030, that crystal ball is cloudy.”

On digital auto retailing – which gained traction last year particularly when dealership showrooms in many states were temporarily closed by government order because of COVID – Carter says, “It’s here to stay. We are working with dealers to make that more efficient.”

But he adds: “Digital and online sales will not replace dealer showrooms. Dealership facilities and the consumer relationship with the sales consultant and manager will always remain the most important things in this industry. This is a people business. It’s people before product.”