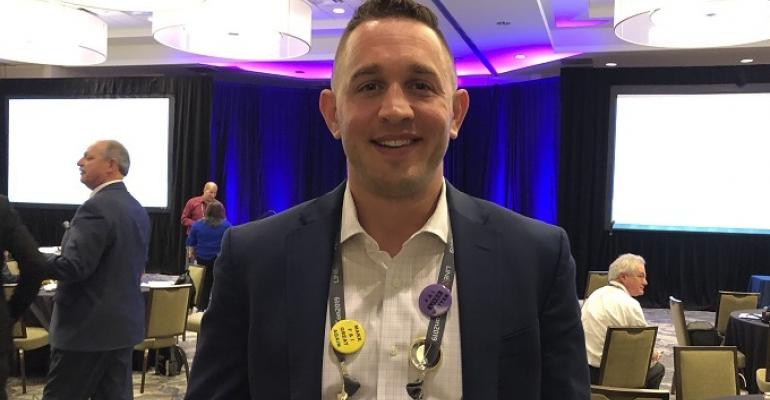 “My mixed-martial-arts career has given me confidence,” Marburger says.
Dealers

He Mixes F&I With Mixed-Martial Arts

“Hey, I’ve been locked in a cage with someone trying to kill me,” Adam Marburger says, explaining why hard-nose customers didn’t faze him as an F&I manager.

DENVER – Adam Marburger fights for what he believes in. He has a fading black eye to prove it.

One of his passions is competing in mixed-martial-arts fighting. Another is training car dealership finance and insurance managers.

“My mixed-martial-arts career has given me confidence,” he says. It also made his days as an F&I manager easier, especially by remaining unfazed when dealing with tough customers.

“Hey, I’ve been locked in a cage with someone trying to kill me,” he explains.

Marburger is among speakers at an inaugural industry gathering here put on by a Facebook group called Ethical F&I Managers.

“I’m a young, humble, aggressive F&I guy,” he says at the EFI Conference. “I’m all things F&I. It started at an early age.”

Marburger began his dealership career as a porter while in college. He moved through the ranks, becoming an F&I manager for a metro St. Louis dealership at age 22 in 2001.

He won a lot of accolades along the way. He left in 2017 to become a trainer. He and business partner Johnny Garlich now run a consultancy called The Income Development Guys.

Of all the F&I products and services, Marburger believes post-warranty extended-service contracts are the tops. “They are the engine that pulls the train.”

They’re also mutually beneficial, he says. “Everyone wins: the dealership, the F&I department, the customers.”

Because of his martial-arts bouts, he’d sometimes show up at his dealership day job with a black eye. If there was a benefit to that, it at least was a customer “conversation starter.”

The F&I department remains a major profit center for dealerships. But it can rank low on satisfaction surveys, with some customers complaining about too much time spent waiting to get into the F&I office to ink a vehicle purchase, too much time spent in the F&I office listening to aftermarket product presentations and the overall feeling of being trapped in the so-called “F&I box.”

“There are a hundred ways to close down a deal,” Marburger says of potential customer pushback, especially from car buyers in defensive moods when they enter the F&I office.

To connect better with customers, he recommends not abandoning scripted word tracks altogether, but relying less on them.

He also advises F&I managers meet customers as early as possible, such as on the showroom floor.

“I’d introduce myself, say I’m here to serve them, ask if they have any questions, say my door is always open and ask if they want something to drink. I had that beverage ready for them when they came into my office.”

Dealership sales and F&I departments can cross swords at times, largely because of the different natures of their jobs. Marburger suggests F&I managers make a point of getting along with vehicle-sales department staffers, particularly the boss.

“I would roll in the same direction as the sales manager,” he says. “It’s about being a good servant to customers and fellow employees. It’s called servant leadership. It will take you far in life. It will make you a fortune.”

He credits F&I trainer Ron Reahard of Reahard & Associates for showing him the ropes when he was a rookie. Reahard read him, concluding he rushed through his presentations. “Ron would tell me to slow down, that you can’t speed up until you slow down.”

Despite his fight-night involvement, Marburger believes in non-combative F&I. “If a customer is rude and hard-nosed, you just got to take a deep breath. That’s what elite F&I managers do.”