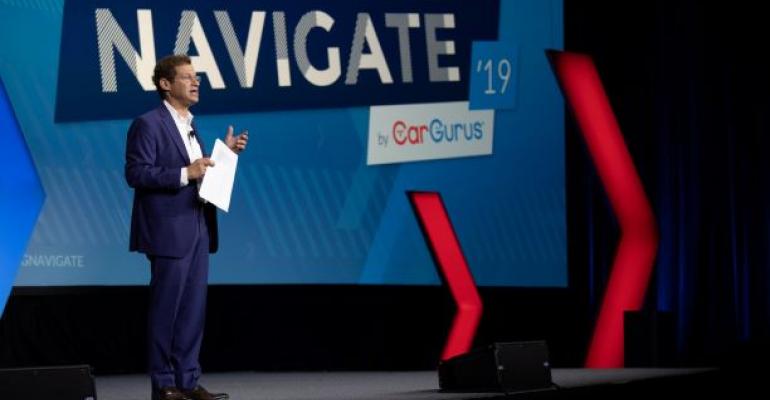 Some dealerships have cut back on, or entirely ditched, traditional media in favor of digital, such as online advertising and social media. But CarGurus research shows only 48% of auto shoppers using digital media say they visit a dealer website before buying.

Dealers haven’t always embraced online shopping, CarGurus COO Sam Zales says. He recalls hearing during an early dealership visit, “We used to like this business a lot more, before the Internet and you guys came along!”

Here are some highlights from the Oct. 22-23 conference:

Some dealership speakers say they have cut back on, or entirely ditched, traditional media in favor of digital, such as online advertising, videos, third-party shopping sites and social media.

Joe Davis, e-commerce director for Ewing Automotive Group in Plano, TX, was the most emphatic.

“We spend zero” on traditional media, he says in a presentation. “No radio, no TV, none of that stuff anymore. No.1 for me is, where are the eyeballs online that are looking at my campaign?”

There was sobering news from CarGurus CMO Sarah Welch: Only 48% of auto shoppers who make a purchase and who use digital media say they visit a dealer website before buying, according to CarGurus research.

On the other hand, 96% visit third-party auto shopping sites, she says. As of first-quarter 2019, the use of dealer websites declined 10% year-over-year while the use of third-party sites increased 14%, Welch says.

“That dynamic is not changing.”

George Augustaitis, CarGurus director-industry analytics and economics, lists positives and negatives for 2020 new- and used-car sales. He predicts 2020 used-vehicle sales of about 40.9 million units, almost exactly flat vs. his estimate for 2019.

CarGurus was founded in 2006 and went public in 2017. The U.S. market accounts for the vast majority of CarGurus’ business, but the company also operates online new- and used-car marketplaces in Canada, the U.K., Germany, Italy and Spain.

Cambridge, MA-based CarGurus says its website averaged 36.9 million monthly unique users in second-quarter 2019, up 2% from a year ago.

CarGurus defines a monthly unique user as a computer or mobile device that interacts with the CarGurus site at least once in a month. The same device is only counted once in a month, but the same consumer could be counted more than once if they use multiple devices.

CMO Welch says, “You have to be where the shoppers are.”