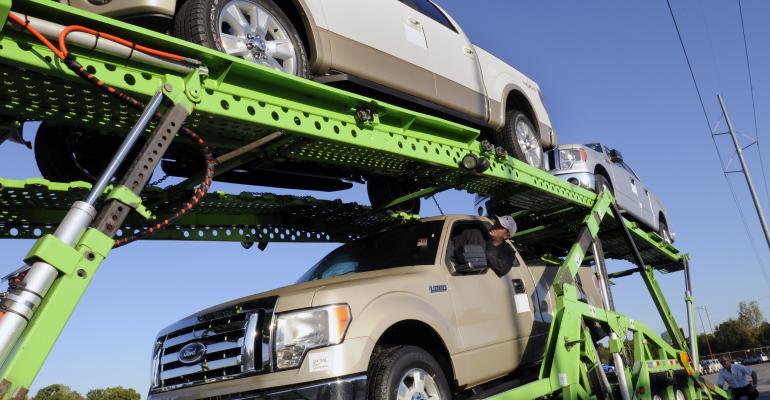 Getting Inventory to Car Dealerships Can Cause Headaches

Carrier and driver supply aren’t keeping up with shipper and buyer demand.

A fractured auto-transport industry continues to put margin pressure on every player involved, from drivers and carriers to auto retailers watching the clock as deliveries continue to slip.

Seasonal fluctuations aside, the current state of car hauling affects the many who depend on transport availability and capacity. Carrier and driver supply aren’t keeping up with shipper and buyer demand.

The effect is the potential for lost income for every entity in the value stream. Those affected include drivers who struggle to fill loads, automotive fleet remarketers moving cars to auctions and auto retailers who rely on auto transport to move purchased vehicles to their lots.

“I just got back from Used Car Week in Las Vegas, where the wholesale and the dealer communities seem in agreement that transport just sucks,” says Bek Abdullayev, CEO of Super Dispatch, a transportation-management system provider.

The emergence of digital platforms, including Super Dispatch, BackLotCars, ACV, TradeRev and Carvana Wholesale, among others, hopes to close this transport gap.

“Ultimately, the technology platform needs to enable each participant in the transportation process to have a simple, fast and positive experience with transporting cars,” Abdullayev says.

Pressuring capacity are rising carrier and driver insurance costs, stricter drive-time regulations and even carriers not designed to haul today’s larger and heavier SUVs and trucks. For example, the recently unveiled 2021 Chevrolet Tahoe and Suburban are bigger than ever.

Older carrier designs limit the number of newer vehicles the carrier can transport per load. These factors, combined with the rigors of the job, have caused many smaller, independent carriers and drivers to leave the business.

The American Trucking Assns. reported the general driver shortage in 2018 was up 20% from the prior year, at a high of nearly 61,000 vacancies. Much of that loss involves auto-transport drivers, says Guy Young, general manager for the Auto Haulers Assn. of America.

For drivers and carriers, the time-consuming challenge to find load leads and coordinate their pickup and delivery trickles down as lost profit opportunity for every player in this ecosystem.

“The original way of doing things as a carrier is, you’re looking at all these load boards trying to find cars, working further and further down the road,” says Sean Hampton, director-logistics for BackLotCars, a transport company.

“And all this is super time-consuming. Any time that a driver is not actually on the road is costing him or her money,” he says.

Services such as Central Dispatch and similar load board platforms brought logistics convenience to the industry, but Hampton says app tools like Super Dispatch that push load leads to drivers’ smartphones help them fill their carriers more quickly without the need to otherwise source loads.

More than half of his drivers use the app to self-fill their transports, he says. “The quicker a carrier gets to capacity, the faster he or she’s on the road, and the faster the delivery happens, so you’re cutting down delivery times exponentially.”

Even so, delivery delays trouble car dealers. For example, Jon Burkeen oversees used-car purchasing and reconditioning for the 18-dealership Hudson Auto Group, which buys 200 to 600 cars a month and operates in Southeastern states.

“I know that right now, transportation should be a three-day process, and it’s like a six- or seven-day process,” Burkeen says. “Whether we’re buying from 200 miles away or 600 miles, it seems the closer we’re buying, the longer it takes, and I don’t get that.

“I’ve been studying and watching this for years. We buy one or two cars here and there, and that’s the biggest hindrance. Transportation is a headache; we’re transporting 450 to 550 cars a month, and we're using, probably 300 to 350 different transportation companies to do that,” Burkeen says.

A dealer can’t sell a car that’s not at the lot, but delivery delays run up what car dealers call holding costs.

NCM Associates, a training and consulting firm, identifies average daily holding cost as a $40 per car in overhead and depreciation burden. It accumulates from the time a dealer buys a used car until it is resold. Holding costs then erodes a sold vehicle’s gross by as much.

“The ideal is a three-to-five-day time to line or T2L, and the clock on that starts when the transport delivers the car to the dealership. The clock continues ticking through mechanical and detail and only stops when the car is moved into a sale-ready status,” says Dennis McGinn, founder and CEO of Rapid Recon, a company that created T2L workflow software.

“The objective is to eliminate any delay or bottleneck to this process, but when cars arrive late from transport, that delay of even a day or two can really impact used-car retail profitability,” he says.

Dealers can control holding cost by reconditioning cars faster, but transportation delay is primarily out of their hands.

Jim Leman writes about automotive transport, auction and retail operations. He is at [email protected]