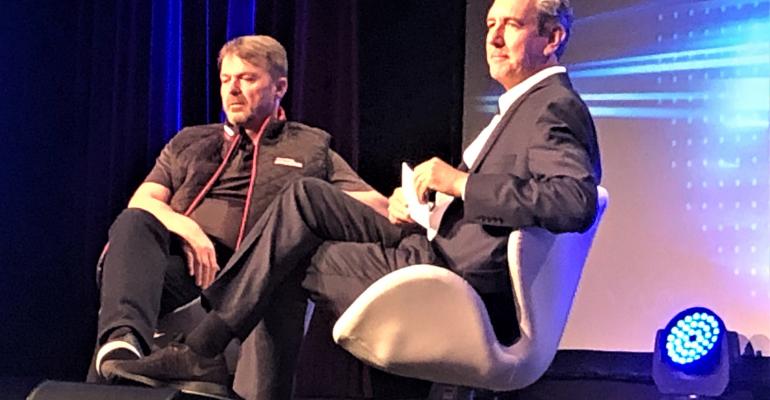 “One thing I would not do is fragment between EVs and ICE,” says AutoNation CEO Mike Manley, a former auto executive.

And they want that seamlessness whether they are buying an electric vehicle or one with an internal-combustion engine, he adds.

“The idea of separating the customer journey because this vehicle has this powertrain and that vehicle has another doesn’t make sense,” Manley says at the annual J.D. Power Auto Summit held here in conjunction with the National Automobile Dealers Assn. annual convention.

“One thing I would not do is fragment between EVs and ICE,” he says during an onstage conversation with J.D. Power President and CEO Dave Habiger.

Afterwards, conference attendee Alan Starling, a veteran General Motors dealer in Florida, tells Wards he thought Manley’s comments were a swipe at Ford, which earlier this month announced it was splitting the company into separate EV and ICE units.

Manley describes a seamless customer journey as one that is quick and easy even if product offerings are “significantly different.”

Virtually every major automaker has introduced EVs, with more to come. Also in the game are startup EV makers such as Rivian and Lucid.

Of the established companies (which he calls “legacy automakers”), Manley says, “They have more technology, and that will be brought to market in an incredible way.”

Manley, an engineer, became head of AutoNation in November. Before that he was managing director-North American operations for Stellantis. He had been CEO of Fiat Chrysler before its merger with PSA, leading to the formation of Stellantis.

During his conference discussion with Habiger, Manley wore a sleeveless jacket with an “AutoNation Racing” patch.

Transitioning to the EV age will require good OEM-dealer relations, he says. “The world will continue to be disruptive and changing.” Currently, the percentage of EV market share in the U.S. is in the low single digits but growing as automakers roll out new products.

Although much has been justifiably made of new levels of digital auto retailing accelerated by COVID pandemic restrictions, Manley says, “There’s still a large part of the population that wants that physical part” of visiting a dealership, at least at some point in the buying process.

It’s important to understand those various customer journeys, he says. Because of its size, AutoNation has accumulated a trove of customer information, he says. “It has not been fully exploited – and I don’t mean that in a negative way. But you should have deep relations with customers beyond the ones that are transactional.”

Although new EVs continue to enter the market, EV shoppers will find “a reduction of choices” compared with the wide range of gasoline-powered vehicles available today, he notes.

Still, he adds, “The road is set for EVs.” Among his goals is to “make sure AutoNation is ready for electrification of vehicles.”

And then there’s the impending age of autonomous vehicles. But that, Manley says, “is still a long way off.”

Steve Finlay is a retired Wards senior editor. He can be reached at [email protected]