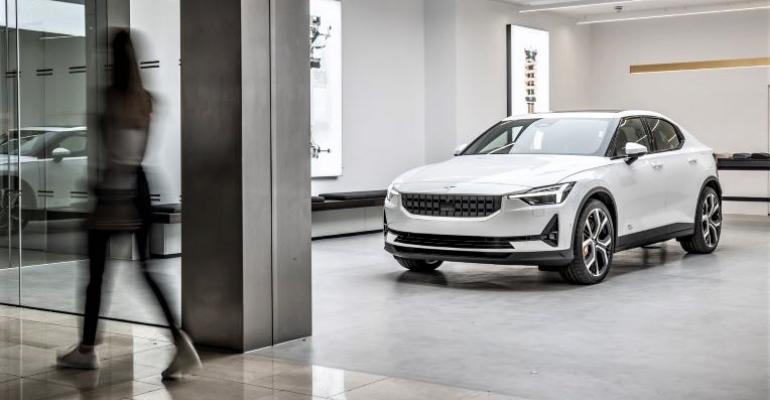 Consumers can get acquainted with vehicles – but not take delivery – at the so-called “Polestar Spaces.” The Polestar 1 and Polestar 2 are available now. Polestar 1 production ends this year, but two new Polestar models are on the way.

Luxury electric-vehicle brand Polestar plans to open 15 new minimalist-style showrooms in the U.S. this year, bringing the total to 19 nationwide.

The performance EV maker is affiliated with but apart from Swedish automaker Volvo. The latter has announced its lineup will go all-electric by 2030.

Volvo dealers will run the Polestar showrooms but at locations that are separate from – and not even close to – Volvo dealerships, a Polestar spokesperson tells WardsAuto. “They will be at places with high pedestrian traffic.”

They also will offer untraditional customer service. Non-commissioned staffers will point out features and answer shoppers’ questions but not actually sell vehicles. Instead, they will direct purchase-minded visitors to Polestar’s online platform to order a model.

The facilities, called “Polestar Spaces,” will include display and test-drive vehicles but not carry inventories.

Like the four existing Polestar showrooms (in California and New York), the new ones will offer at-home test drives.

Polestar says it will partner with established Volvo retailer groups “in order to best represent the brand in each location.”

Production of the Polestar 1 began in 2019 and was limited to 1,500 units over three years. That production run ends this year. Deliveries of the Polestar 2 began in late 2020. Both cars take design cues from Volvo models.

“In 2019 we stated our goal of servicing 85% of the addressable EV market within a year of the Polestar 2 launch,” says Gregor Hembrough, who heads the company’s North American unit.

“With these 2021 appointments, we will accomplish that and more, especially with our free pickup and delivery servicing within 150 miles (241 km) of a brick-and-mortar Polestar location.”

The company says the showrooms are designed to let customers see and experience the products firsthand “without the pressures that come from a traditional automotive dealership.”

Polestar says each Space “embodies the minimalist Scandinavian design ethos of the brand, minimizing any distractions within the showroom so guests can enjoy their experience at their own pace.”

Existing showrooms are in Los Angeles, Manhattan and two in the San Francisco Bay Area (Corte Madera and Santa Clara).

Polestar 2 test drives can be coordinated onsite or at home at Polestar.com/test-drive. In the future, the Polestar 3 electric performance SUV will join the portfolio, as well as the Precept – a design study vehicle released in 2020 that is slated for future production.

In a somewhat complex business setup, China-based Geely owns Volvo and half of Polestar, while Volvo separately owns the other half.