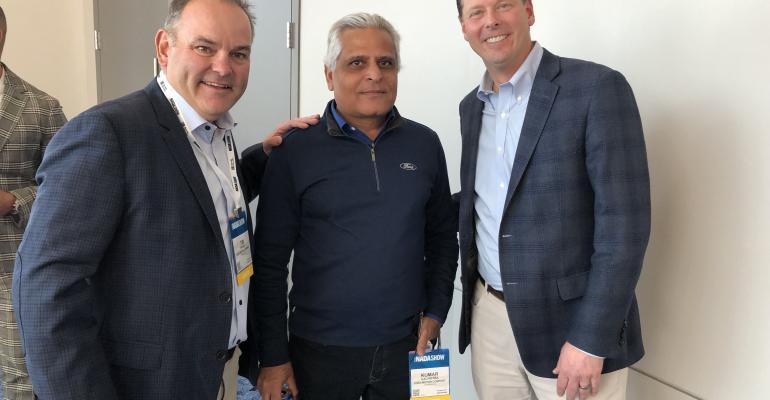 “It was standing-room-only with people lined against the back wall, something I’ve never seen before at a franchise meeting,” says Tim Hovik, chairman of Ford’s National Dealer Council.

LAS VEGAS – A packed room of Ford and Lincoln dealers listened to the automaker’s executives outline bold plans to split the company into separate units: one for electric vehicles, the other for vehicles powered by traditional internal-combustion engines.

Dealers interviewed afterwards – including those who were not initially all-in with the reorganization plans – say they liked what they heard during Ford’s closed-door dealer franchise meeting at the annual National Automobile Dealers Assn. Convention and Expo here.

“It was standing-room-only with people lined against the back wall, something I’ve never seen before at a franchise meeting,” says Tim Hovik, chairman of Ford’s National Dealer Council and the owner of San Tan Ford in metro Phoenix.

As for the mood of the meeting, he says, “People were pumped.”

Regarding the EV-ICE divisional creation, Hovik says: “Things will get worked out, but I haven’t seen any cons in this. We’re looking at the company making a commitment to both sides.”

“The focus is on customer experience, and no dealer says they don’t want to focus on that,” Frick says, referring to the two new passenger-vehicle units.

“Because we all know that BEV (battery-electric vehicles) are coming in a big way, but also that most of our current business is ICE vehicles. So, knowing Ford is committed to both sides is fantastic.”

“We all originally thought that as BEV sales grow, ICE will have to come down,” Hovik replies. “What we heard in the franchise meeting is that we are going to build both units, and that’s great news.”

The meeting allayed some dealer concerns.

“Given all the hype about this, I’m comfortable and confident in the direction the company is going,” he tells Wards. “We’re celebrating our 60th anniversary as a Ford dealership, and it’s never been a better time to be a Ford dealer.”

Ford-Lincoln dealer Karl Kramer of the Golden Circle Auto Group in Jackson, TN, says news of the 118-year-old automaker carving out separate EV and ICE units “worried me at first, I’ve got to say. But after what I heard today, I’m OK with it.”

“No, more than that,” he tells Wards. “It seems like it is going to be a stronger partnership between the company and dealers.”

Part of the Ford initiative would require dealers to commit to investing in EV staff training and related upgrades for them to sell electrified vehicles.

A reported item in the proposed terms of agreement, which remains a work in progress, is that Ford dealers would not negotiate EV prices with customers.

But Frick says: “We haven’t figured that out yet. Of course, there must be a dealer profit margin. Dealers would set their prices. More details are to come.”

Galhotra describes the feedback from dealers at the franchise meeting as “optimistic.” Discussions included how the company and its dealers can keep conversations going about the major reorganization, he says.

Ford CEO Jim Farley, who is spearheading the bifurcation program, was absent from the NADA dealer meeting, but not conspicuously so.

Farley, who prides himself as the grandson of a Lincoln dealer, had met earlier with top Ford dealers to apprise them of the new plans, Frick says.

Farley himself will lead the EV unit. He describes the divisional split as a way to better compete with Tesla, currently the EV segment leader.